Powerful preaching of the day - october 25 by Bishop David Oyedepo

By Eko4show (self media writer) | 1 year ago 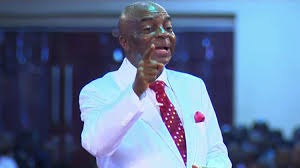 "For indeed, when we came to Macedonia, our bodies had no rest, but we were troubled on every side. Outside were conflicts, inside were fears. Nevertheless God, who comforts the downcast, comforted us by the coming of Titus, and not only by his coming, but also by the consolation with which he was comforted in you, when he told us of your earnest desire, your mourning, your zeal for me, so that I rejoiced even more."

In Acts 16:7-10, Paul and Silas wanted to go to Asia to preach but the Holy Spirit prevented them. They chose another direction but the result was the same. Then Paul had a vision where he saw a man making an appeal to come to Macedonia. Taking that as the prompting of the Spirit, they headed for Macedonia.

Getting there, one of their first converts was a lady by the name Lydia the seller of purple. At her insistence they stayed in her house

You would have thought that, having been inspired by God, it was going to be all smooth and problem-free. Isn't that the theology that some of us have been fed with?

Everything seemed well until while going to pray one day, they ran into a demon-possessed girl who appeared to have been validating, to a nauseating level, their ministry. Friend, God is your number 1 validator.

Paul cast out the demon and the people whose "cooking pot" depended on the divination spirit in that girl became threatened and offended. They literally unleashed hell on Paul and Silas, beating and even getting them thrown into jail in solitary confinement - all for obeying God o!

It was at this point that Titus came with a comforting word from the Corinthian church and Paul in reply through Titus was narrating their ordeal to the church in Corinth.

He said there was no rest, they faced conflict from EVERY DIRECTION, fear within and battles without.

Doing God's will? I know that many of you have never had that experience before where it seemed as if you were jinxed for even trying to hear, talk less obeying God's voice. Some of you must be so spiritual, unlike learners like me

If the devil kept quiet and didn't bother coming against you in the pursuit of divine purpose, you need to check the source of your inspiration.

But thankfully, the story does not end with the woes and the pains. Why? Because the One who commissions never abandons. In the midst of the crisis, He showed Himself to be God, first by the comfort provided by the arrival of Titus with comfort and support for him.

Second, the miraculous way of escape was provided as they lifted up their voices IN THE MIDST OF THEIR PAIN and worshipped the ONE WHO CALLED AND SENT THEM.

Who do you go to in crisis? Who is the source of your confidence in it all? Look at verse 6. The NLT says that God is the encourager of those who are discouraged. Have you found yourself in that valley where from the middle of nowhere, God sends someone with a word that just soothes your pain and gives you hope?

The current pandemic has affected people in diverse ways and there is fear on every side. Men's hearts are failing them for fear.

Perhaps it has affected you in some terrible way. Emotionally, financially, stress in your relationship, uncertainty about what the future holds

I bring the mind of Christ to you.

You are not forsaken.

There is indeed a future.

The light will still shine at the end of this tunnel.

Lift up your voice in praise. Surrender to your Maker, not to your despair.

God will come through for you!

He will make a way.

He will send His word as He is already doing now.

The word will run swiftly to bring healing to every part where you ache.

It's an assurance. His presence is our only guarantee and the only source of strength we have. He has never lost one battle and He won't use you as a first failure experiment!!!!

"They don’t let up— they smear my reputation and huddle to plot my collapse. They gang up, sneak together through the alleys To take me by surprise, wait their chance to get me. Pay them back in evil! Get angry, God! Down with these people! You’ve kept track of my every toss and turn through the sleepless nights, Each tear entered in your ledger, each ache written in your book. If my enemies run away, turn tail when I yell at them, Then I’ll know that God is on my side. I’m proud to praise God, proud to praise God . Fearless now, I trust in God; what can mere mortals do to me?"

What can mere mortals do to me? Won kéré! Dem no fit. Dem too small. Dem no get logo!

NOTE AGAIN : *You’ve kept track of my every toss and turn through the sleepless nights, Each tear entered in your ledger, each ache written in your book. If my enemies run away, turn tail when I yell at them, Then I’ll know that God is on my side. I’m proud to praise God, proud to praise God . *Fearless now, I trust in God;* what can mere mortals do to me?"

Not one drop of your tears was shed in vain. It is part of God's grouse against the adversary!

Wherever you are, lift up your voice and begin to worship Him who is able to do exceeding and abundantly above all that you can ever ask or think. Praise him who has opened the gates of brass and cut the bars of iron asunder

As you do so, the walls that fenced you in are collapsing! The chains are being broken! The prison doors are being flung open! This midnight of pain mixed with praise will turn to a morning of great joy. God has come through for you. Let the victory songs burst forth. Joy cometh! Morning is here! Wake up into a new confidence and limitless glory and power! The rest of the year is set to be the best of the year for you in Jesus' name!!!

Did I hear anyone with a loud, wall-sinking shout of Hallelujah?

Remember, the sky is not your limit,God is your limit

Content created and supplied by: Eko4show (via Opera News )