Saint Of The Day: Saint Anthony Of Padua, The Patron Saint Of Lost Articles(Prayers)

Saint Anthony of Padua, Priest and Doctor lived from 1195–1231. He mastered the Word of God. Saint Anthony of Padua (formerly Fernando), is a famous Franciscan saint especially honored at an impressive shrine in Padua, in Northern Italy. But he was not born as Anthony, was an Augustinian priest before he became a Franciscan, and was from Lisbon, Portugal, not Italy.

Saint Anthony, along with Saint Bonaventure, another early Franciscan, lent theological heft to the somewhat esoteric movement founded by Saint Francis of Assisi. Saint Francis was uniquely sensitive and eccentric, unsuited to leadership, and vexed by the need to exercise authority. It was Saints Anthony and Bonaventure who gave the Franciscan Order credibility, who anchored it in sound theology, and who assured its survival and continued growth.

Today’s saint was baptized Fernando and grew up in a privileged environment in Lisbon. He received a superior education and entered the Augustinian Order as an adolescent. While living in the city of Coimbra, he met some Franciscan brothers who had established a poor hermitage outside of the city named in honor of Saint Anthony of the Desert. Young Father Fernando was very attracted to their simple way of life. From these friars, he also heard about the martyrdom of five Franciscan brothers at the hands of Muslims in North Africa. These martyrs’ bodies were ransomed and returned for burial in Father Fernando’s own abbey in Coimbra. Their deaths and burials were life-changing moments The Augustinian Father Fernando asked, and received, permission to join the Franciscans and then adopted a new name—Anthony—taken from the patron saint of the hermitage where he had first come to know the Franciscans.

The newly christened Father Anthony then set out to emulate his martyr heroes. He sailed for North Africa to die for the faith or to ransom himself for Christians held captive by Muslims. But it was not to be. Anthony became gravely ill, and, on the return voyage, his ship was providentially blown off course to Sicily. From there he made his way to Central Italy, where his education, mastery of Scripture, compelling preaching skills, and holiness brought him deserving renown. Paradoxically, it was because Anthony received excellent training as an Augustinian that he became a great Franciscan. Saint Francis himself soon came to know Father Anthony, a man whose learning legitimized the under-educated Franciscans. Saint Francis had been skeptical of scholarship, even prohibiting his illiterate followers from learning how to read. Francis feared they would become too prideful and then abandon their radical simplicity and poverty.

Saint Francis only reluctantly, several years after founding his Order, allowed some of his brothers to be ordained priests. He had originally relied exclusively on diocesan priests to minister to his non-ordained brothers, and he distrusted his followers who aspired to the honor of the Priesthood. The presence of Anthony, and later Bonaventure, changed all that.

In time, Father Anthony became a famous preacher and teacher to Franciscan communities in Northern Italy and Southern France. His knowledge of Scripture was so formidable that Pope Gregory IX titled him the “Ark of the Testament.” In Anthony’s Shrine in Padua, a reliquary holding his tongue and larynx recall his fame as a preacher. These organs had not disintegrated even long after the rest of his body had returned to dust. Saint Anthony is most often shown either holding the Child Jesus in his arms or holding a book, a lily, or all three. His intercession is invoked throughout the world for the recovery of lost items and for assistance in finding a spouse.

Anthony died at the age of just thirty-five in 1231, about five years after Saint Francis had died. He was canonized less than one year later. In 1946 Saint Anthony was declared a Doctor of the Church due to the richness of his sermons and writings. He was conscious as he succumbed to death. In his last moments, the brothers surrounding his bed asked him if he saw anything. Saint Anthonye said simply, “I see the Lord.”

Saint Anthony of Padua, we seek your powerful intercession to have the right words on our lips to inspire the faithful and to correct and guide the ignorant. Through your example, may our words also be buttressed by our powerful witness to Christ.Amen

St Anthony of Padua, pray for all in seek of their spouses, pray for us. Amen 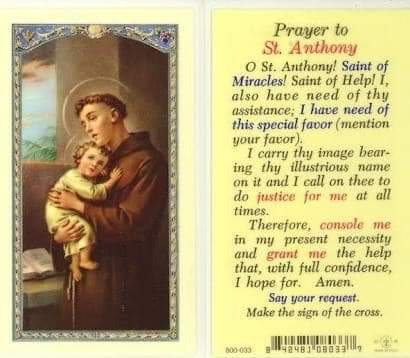