7 Mysteries About Trance In Celestial Church And Its Abuses

By jacobfrydey (self media writer) | 1 year ago

Trance, also known as Ori Oke Emi in various Spiritual churches, is a semi-conscious spiritual state in which a person is not self-aware and is either completely unresponsive to external stimuli or completely unaware of them (but capable of pursuing and realizing an aim as been directed by the Holy Spirit or the angel assigned to such person). After the earthly bodies have been fully occupied for a set period of time, the immortals take command in order to carry out different Divine responsibilities, deliverances, Prophetic Impartations, and Healings. In the Bible, people have been described as slipping into trance after being arrested by the Holy Spirit and then becoming mighty and strong as a result. These personalities include the Apostle Paul (Acts 22:17), the Prophet Balaam (Numbers 24:1-4), and Simon Peter (Acts 10 vs 10).

Going into trance for a day, 3,7,14, or 21 days is a rare Spiritual privilege granted to the Celestial Church of Christ, particularly our sister denomination known as Cherubim and Seraphim, without any scripted or ceremonial practices, but what we have today has shifted all eyes away from the truth and we have suddenly turned such a rare Spiritual experience into a show of embarrassment, frivolity, and obscene behavior. Here are the facts and riddles concerning dealing with trance disorders in the Celestial Church up to this point:

1. Everyone in trance does not need to be acknowledged and robed as a prophet or prophetess straight soon. Let us avoid exposing our young members to spiritual risks that are unnecessary; instead, let us focus on leading them to Christ and richly impacting the Bible into their lives. You haven't missed the Prophetic phase of preparation for the battles ahead of your Spiritual calling just because you've had the opportunity to go into trance.

2. Our Celestial doctrines do not include any ritual functions for prophets descending from Trance. However, because it is a tradition in most parishes, I would encourage that things be done in the best interests of God Almighty and in a balanced manner. This means that, among other things, dancing in the name of Ariya, applauding, singing corrupted melodies, wearing hand gloves, flowers, and carrying altar cloths across the shoulder should all be forbidden. We are in the presence of the Lord God, and we must carry out our responsibilities and worship with dread and trepidation.

3. A proper spiritual examination should be undertaken before the shepherd approves or confirms someone to be in trance for real, and when the individual is being subjected to various public consultations, the appointed Wolider in that parish must always be there and in spirit as a backup. Because dark forces from other worlds are frequently summoned to attack.

4. People in trance are not expected to eat or drink anything, but those who are blessed with the uncommon privilege of being able to consume fruits are usually beginners or first-timers, however this is not always the case. Meanwhile, their temporary Celestial body eats anything it can get its hands on, such as manna or fruits, while being held in the Sacred dwelling until the day of their descend. The majority of prophets do not wish to return to their home planet, thus it is still a fantastic experience.

5. Keep in mind that the male prophet Alexander Yanga, who drew the name Celestial Church of Christ on the wall, was cured after a seven-day trance. SBJ Oshoffa, our Pastor Founder, went into trance and did signs and wonders during his tenure on this planet. These days, prophets in trance practicing divine healing, where the blind sight, the lame walk, and the dead rise from the grave, are uncommon. Mattresses, water beds surrounded by fruits, water, soaps, honey, names inscribed in ink, and altar cloths used as duvets to keep insects at bay are all that we see. So, what does this blotted descending event known as Isokale Emi imply, especially since there haven't been any great supernatural manifestations like in the past?

On a spiritual level, there are six things to keep in mind. The amount of days required to begin on such a Spiritual journey is determined by the signs given to the individual prior to entering trance, when their spirit is still contemplating whether or not to proceed with the edge out procedure. The first three, seven, or twenty-first steps of a ladder may have been demonstrated to some. Others will see exact amounts of stones as the individual passes through them before coming to a halt at the exact days that must be spent. Some people see their angel guiding them from one location to the next for seven days or more, while their falling days remain the same. When they are pushed not to follow such a Spiritual route, whether by their shepherds, Woliders, relatives, or religious doctrines, life becomes unbearable within three days or more, with a deluge of bodily signs of recklessness ranging from daily headaches, tongue shifts, and bodily aches, to mention a few.

7. Being in a trance does not imply that you have been raised from the dead. It doesn't make you the most important person in the church just because you've been in a trance. Being in trance does not guarantee that your name will be inscribed in the book of life or that you will become a prophet. Salvation and redemption in Christ are required for other essential activities. Let us use this once-in-a-lifetime chance to lead more people to Christ in humility and gentleness, so that we may be filled with the fruits of the Spirit and intertwined in God's glory.

To summarize, the trance experience in the celestial church should not be destroyed, but the falsely instilled ceremonial activities should be abandoned or carried out with utmost humility and orderliness. 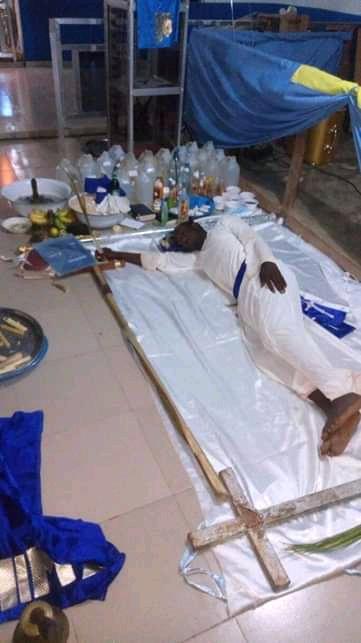