By DavidIlori (self media writer) | 2 years ago 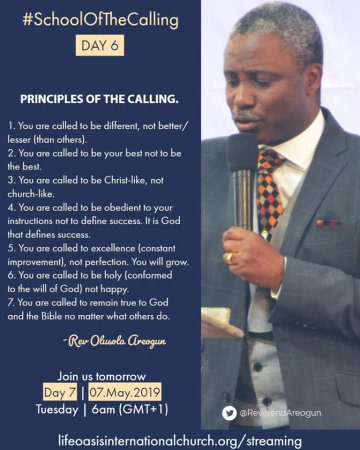 The work of a Pastor or a MAN OF GOD is such that anyone chosen and called by God to do it should understand and use God's word, formulae and power to operate. This will enable him achieve what God expects of him and be a blessing to humanity, without soiling his hands in dirty waters of moral scandals on earth.

But unfortunately, many so called MOGs are using the wrong formulas satanically created to make the church of God unholy and full of mess; as we experience these days.

So, below are 21 vivid signs that your Pastor is on the wrong path and also leading you wrongly. Remember "by their fruits, you shall know them"(Mt.7:16).

1. He want other pastors to believe that he is more anointed than them and as such, they should all look up to him. When you invite him to your church, he must pray and lay hands on you so that your members will see how "powerful" he is and look for him instead of you

2. Does everything in his power to help you not to believe in yourself so that he can control you perpetually. He is closer to God than you and God answers his prayers faster than you're especially when you sow seed in his direction

3. Does not like associates that can use their brain. Loyalty to him means blind followership.

4. He is the BOSS, he is always right! He is INFALLIBLE! where is it in the Bible that anyone is infallible? Do you remember that Paul corrected Peter at one point?

5. He doesn't just give gifts.. He give so as to control you. He gives where he is expecting something. He gives to proof a point. He live his life proofing points. He gives to show you that you are small and you need him. He gives to show the people that he can give. HE WORKS WITH MIND CONTROL.

10. He open branches as a means of satisfying his ego. His kingdom need to expand! He is always INVADING TERRITORIES LIKE A WARLORD! He intends to dominate other churches with his branches. He target "enemy churches" to pull down. People leaving other churches to join his makes him feel special. He doesn't target the unchurched, he target already established members in other churches to expand his territory.

11. He is vindictive, revengeful and wicked. He pay good with evil. He never forget nor forgive.

13. He is always looking for promising young ministers to conquer and put under his control. He sees your prospects, reach out to help you and put you under his control to his own gain. Once he is interested in you, know that you can't survive without him.

14. Inviting you for his ministers fellowship is to stay relevant to him and not to build you. The fellowship give him the opportunity to brainwash you that you need him!

15. They take from small churches to build their already big churches. They won't support struggling churches genuinely. Your suffering make them feel bigger and special. They are cunny business men.

16. They will never teach you the true secret of their lives and success.

17.Everyone that they can't control is their enemy and they tell other ministers and members to fight such a person

18. They advertise their ministry too much. Advertisement is different from evangelism. They actually look for endorsement everywhere! They pay people to talk about them! They want to be accepted as the best ministry by this sin-coated world. They do image laundry and pay heavily for it.. They won't sleep well if they hear something negative about them from the world....

19. He must be popular to the extent that he is now more popular than Jesus in his church. You can't do a testimony in church without attributing it to "his anointing" etc

20. Just be loyal to him. Don't try to "outshine" him. Whether you are loyal to God is not important. He has his own definition of loyalty.

21. Don't "dare" his position. Don't aspire to be him. He lives a threatened life! He feels his position is at stake! If he travels and can't be around to preach, Trust is a big issue for him... He doesn't trust himself and can't afford to trust anyone else!

Is this the type of leadership that Jesus came to exemplify? It is well with us! If you are a Christian leader currently using the principles of the 48 laws of power, I want you to know that you have left the ministry of God, you are currently serving yourself and you need to repent and return to God. Allow God to show you leadership principles of the kingdom as contained in the Bible. May God help us ALL in Jesus mighty name!

Content created and supplied by: DavidIlori (via Opera News )