By IJESUNOBA (self media writer) | 1 year ago 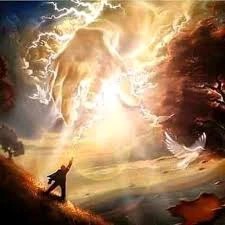 You must realise that the creation of the human race is not an accident or evolutionary trends as many scientists claimed. But humanity is created by the Divine Purpose of the Living God. Read "Genesis 1:26" as you know that GOD is Sovereign and He has the Omnipotent power over all. And He honours His Word more than all His Names ( Psalm 138:2c). Believe it or not, there is nothing anyone can do to stop God's living word from coming to reality. For a year like this. You need to be acquainted with the Anointing of the Living God Yahweh and keep calling upon Him to arise for you.

Now, let us look at two scriptures where God arose and see what the arising caused "Psalm 68:1 Let God arise, let his enemies be scattered: let them also that hate him flee before him." Also, according to "Mark 4:37 And there arose a great storm of wind, and the waves beat into the ship, so that it was now full. 38 And he was in the hinder part of the ship, asleep on a pillow: and they awake him, and say unto him, Master, carest thou not that we perish? 39 And he arose, and rebuked the wind, and said unto the sea, Peace, be still. And the wind ceased, and there was a great calm."

Make the following declaration loud and clear: "O God, arise and anoint me for 2021, in the Name of Jesus.

In Psalm 68:1, as a result of the arising of God, two things happened: - His enemies were scattered,

- Those that hate Him flee before His face. This is where we got our popular song: " Let God arise and my enemies be scattered (3ce);

- There was satanic conspiracy.

- There was a gathering of the enemies.

- There was a rising up of powers, principalities, rulers of darkness of this world and spiritual wickedness in high places.

- There was threatening and boasting of the enemy.

- The enemy had already concluded plans to attack the children of God.

- There was a show of power by the enemy.

- Evil kings and thrones were having a field day.

- Sickness boasted that it has terminating power.

- There was darkness and confusion.

- The enemy had moved to bury destinies and captured innocent souls.

- The possessing of possessions was practically impossible.

- The strongman guarded his palace.

- The goods of the strongman was in peace.

- Wickedness was entrenched in multiple places.

- The Red sea was boasting before God arose.

- Pharaoh was a stubborn pursuer before God arose.

The LORD GOD OF Jacob shall arise for your sake, and your enemies shall scatter, in the Name of Jesus.

Before Jesus arose, there had arisen a great storm pouring water into the ship and the disciples were afraid. But what happened after Jesus arose? The storm died; the storm had to go down as the Master arose. There could not be two captains on the same sea. I pray that the Master will arise for your sake today, in the Name of Jesus. The arising of the Master made in the storm.

The Bible says, according to " John 10:10 The thief cometh not, but for to steal, and to kill, and to destroy: I am come that they might have life, and that they might have it more abundantly." Note - There is a coming of the thief to steal, to kill and to destroy; but that is not the only coming that happens. There is also a greater coming: this is the coming of the Master to give life and to give life more abundantly. Often the devil takes the first shot in a great hurry; he arises first with the attacks and with the storm.

Advice to those passing through difficult times now. You must remember that God also usually allows the devil to do the preliminary stirring, the evil storms before He shows up with His glorious Peace. The Holy Bible says that weeping may tarry for the night, but joy comes in the morning. So, the darkest hour is just before dawn. Every night is an assurance that morning is coming. The storm never arise again after Jesus had spoken. The sea of Galilee where this happened is now one of the calmest seas in the world, meaning, there has never been another storm there since Jesus commanded this word " Peace be still ".

There was a permanent stop to storms in that sea after the encounter with JESUS. That storm was the worst and the last. For so long since then, there is still a very great Peace. Can you shout this prayer loud and clear : " O God arise and anoint me and my Family for 2021 by the Power in the Blood of Jesus."... To be continued

Content created and supplied by: IJESUNOBA (via Opera News )