Today's Headlines:Bishop Reveals Cause Of Insecurity In Nigeria, SERAP Drags Buhari To Court 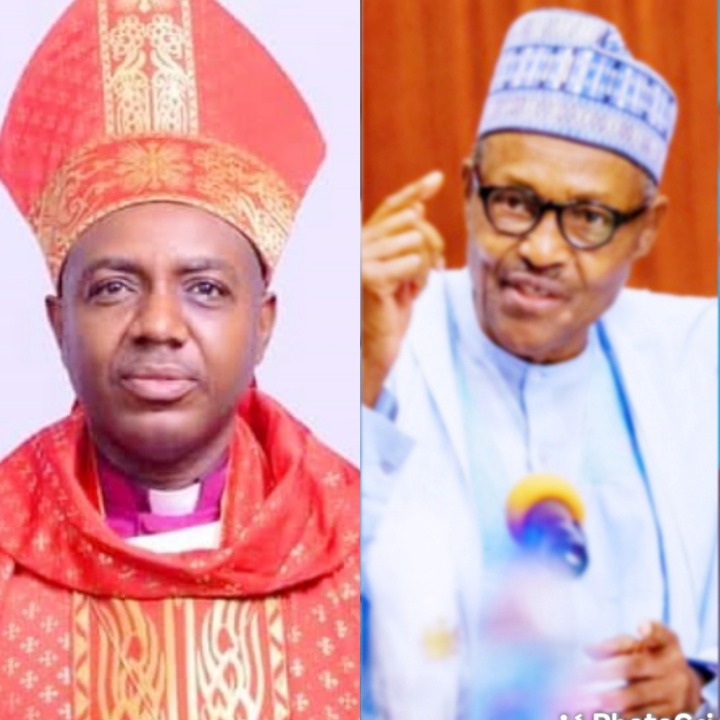 Bishop Reveals Cause Of Insecurity In Nigeria 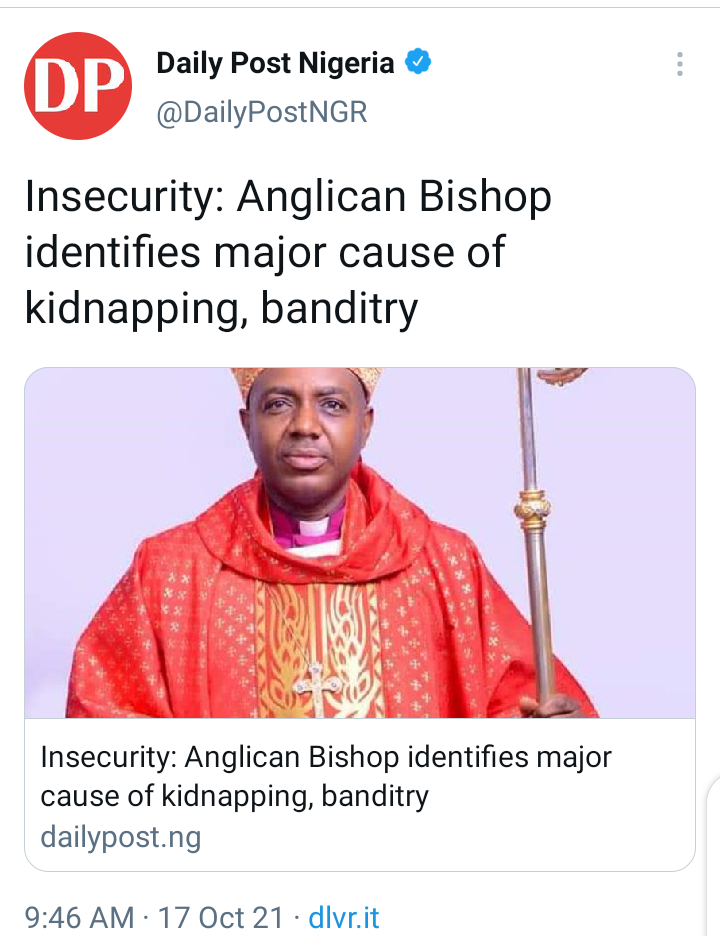 Rt. Rev. Christian Onyia, Bishop of Anglican Diocese of Nike in Enugu State has proffered major solutions to kidnapping and banditry in Nigeria.

Onyia said Nigeria had witnessed an increase in kidnapping and banditry due to inequity, injustice, poverty, lack of education and lack of employment opportunities.

He said the issues of kidnapping and banditry would be a thing of the past if the issues identified were dealt with.

The cleric spoke on Saturday while reading his Bishop Charge at the Third Session of the Fifth Synod of the Diocese held at St. Peters Anglican Church, Thinkers Corner, Enugu. 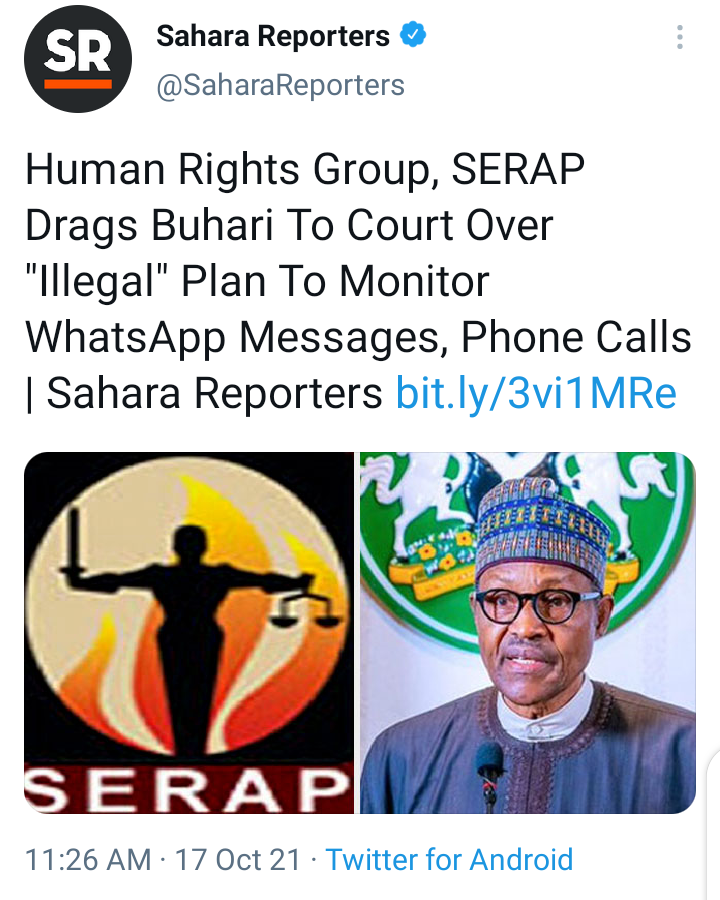 Socio-Economic Rights and Accountability Project (SERAP) on Friday, filed a lawsuit at the Federal High Court in Abuja, against President Muhammadu Buhari's administration over plans to track WhatsApp messages.

The suit, according to SERAP was necessitated by the proposal in the Supplementary Appropriation Act signed in July 2021 to spend N4.87 billion to monitor private calls and messages. It added that the amount is part of the N895.8 billion supplementary budget approved by the National Assembly.

In the suit filed, SERAP prayed the court to “declare illegal and unconstitutional the plan by the administration to track, intercept and monitor WhatsApp messages, phone calls, and text messages of Nigerians and other people, as it severely threatens and violates the right to the preservation of privacy.”

Joined in the suit as respondents are the Attorney General of the Federation and Minister of Justice, Abubakar Malami, SAN; and Minister of Finance, Budget and National Planning, Zainab Ahmed.

In the suit number FHC/ABJ/CS/1240/2021 SERAP sought: “an order of perpetual injunction restraining President Buhari and any other authority, persons or group of persons from unlawfully monitoring the WhatsApp messages, phone calls and text messages of Nigerians and other people.” 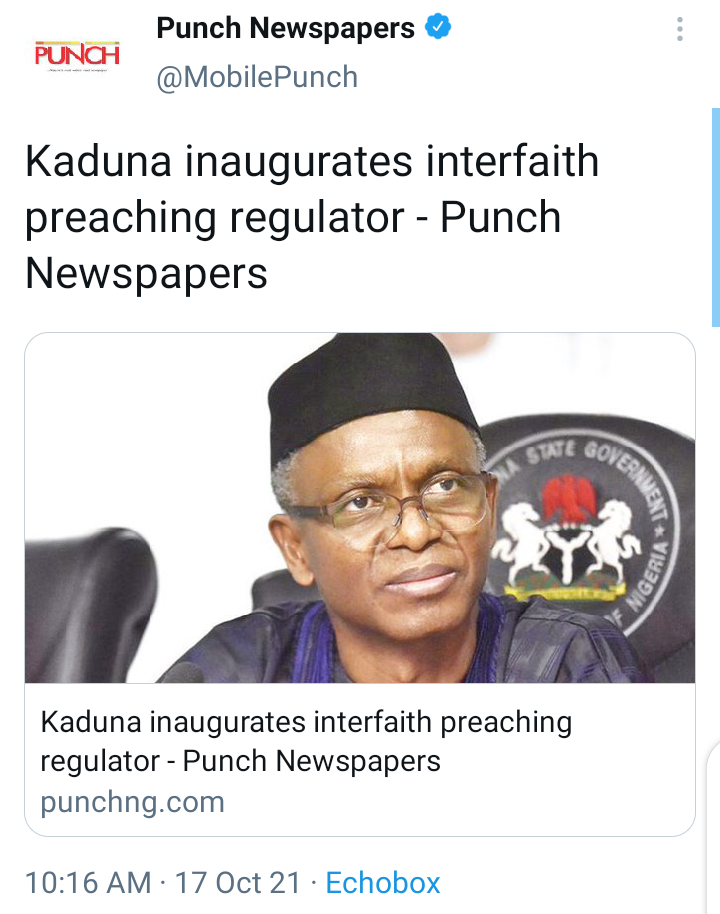 Governor Nasir El-Rufai of Kaduna State has inaugurated an Interfaith Preaching Regulatory Council to guide religious preaching in the state.

The governor noted that religion should not be a trigger for violent conflict in the state. According to him, some adherents even question the right of others to exist, let alone practice their faith or live wherever they wish.

El-Rufai recalled that the late Air Vice Marshall Usman Muazu enacted the Religious Preaching Edict in 1984 to address the matter.

The governor who spoke at the inauguration of the council added that “subsequent military governors amended the edict to vary the penalty imposed for violations of its provisions.”

He stated, “This is a law that has always been in the statute book of Kaduna State but it has not been implemented faithfully. We decided in 2016 to review this edict and subject a revised law to the scrutiny of an elected legislature for the first time.

“We have now a religious preaching law, and we are determined to do our best to help stamp out the poison from the negative practice of religion.