How Sodom and Gomorrah Used to Be Replicas Of the Garden of Eden (Isaiah 1:10)

By Adexterous (self media writer) | 11 months ago

The most beautiful place that the Bible recorded had been blessed with the glory and favour of God was the garden of Eden. The word "Eden" means a park, orchard, a serene place that is free from troubles and worries. It is used symbolically in the Scriptures to describe the blessedness of the presence of God with a person. It is called the garden of God in Ezekiel 28:13.

Likewise, in the literal story, Sodom and Gomorrah, the two cities in the Jordan valley, were also replicas of the garden of Eden. It did not start out to be an evil and corrupt inhabitation. This was before it destroyed by God. It was well-watered and luxuriant as the garden of Eden. 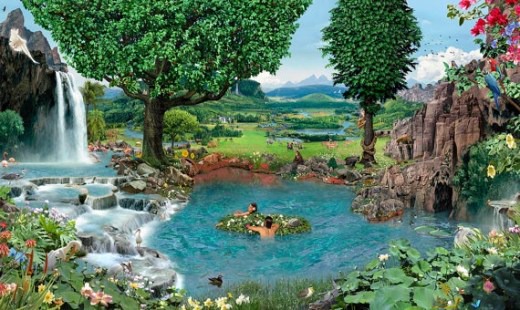 At that time, even Abraham was willing to dwell in the land of Sodom and Gomorrah. He had said to Lot his nephew, "isn't the whole land before you? Separate from me: if you go to the left, I will go to the right; if you go to the right, I will go to the left". Lot looked and saw that the entire Jordan Valley as far as Zoar was well-watered everywhere like the Lord's garden and the land of Egypt. This was before the Lord destroyed Sodom and Gomorrah.(Genesis 13:9–10).

However, in the spiritual sense of the Word, Sodom and Gomorrah were often used to describe the people of Jerusalem after they had disobeyed the instructions of God. Prophet Isaiah said, "Hear the word of the Lord, you rulers of Sodom! Listen to the instruction of our God, you people of Gomorrah!" (Isaiah 1:10). He was referring to the leaders of Judah and Israel. These were people who were said to enjoy the company of angels and the presence of God as in the garden of Eden. Their evil and corruption were what the prophet signified by "Sodom and Gomorrah." This is how Sodom and Gomorrah were once the cities of the Lord, where righteousness and peace, good and truth reigned.

However, the following lessons are taught from the literal story:

1. It is NOT a geographical location or place that basically determines the nature of a person but the nature of the person himself. If Abraham had chosen the Jordan Valley, near Sodom and Gomorrah, the Lord would have still visited him and given him the message about making him the father of many nations. It is like Jacob who dug wells and the men of the land would snatch it from him thinking that it is the land that is blessed. But as soon as Jacob left the wells, the dried up.

2. Anyone can become anything depending on their personal choices.

3. God loves His people in any situation and condition they may find themselves. He did not directly destroy the people of Sodom and Gomorrah but their own wickedness and falsehood destroyed them. So, it is the consequence of people's choices that either destroys or saves them.