"We men of God don't condemn, If not I would have in the first place" - Prophet Divine reveals reason why his marriage crashed.

A prophet and a man of God of a particular church, Healing Grace Deliverance Ministry reveals reason why his marriage with his short time bride has crashed.

The prophet by name Divine Okoh spoke to LIB in a phone conversation the details about the marriage crash which was published. Meanwhile, Linda Ikeji blog had earlier published a story of the pastor on the 5th of August, how his marriage with his wife Happiness broke over his inability to send the wife back to school as promised. 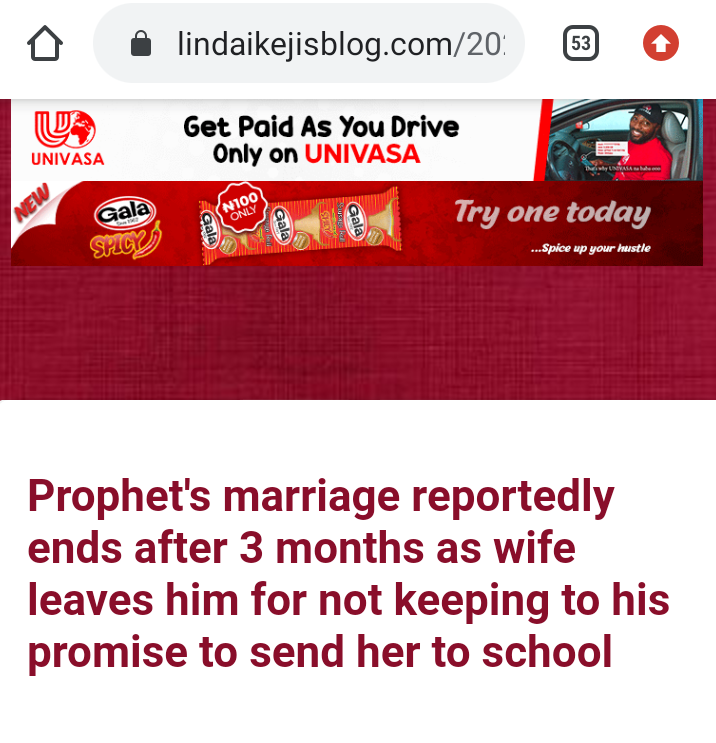 Speaking to LIB, he said he met his wife on Facebook under a comment section of a controversial post, then they took it up from there then got married shortly because the parent of the wife wanted them to get married as soon as possible and also for the fact that he his a pastor he cannot keep a date on the purpose of canal knowledge only.

According to reports, The man of God met his bride in March and married in April with a promise to the mother of the bride to send her back to school.

The bride Hapiness Nwakanma, had finished her Ordinary National Diploma from the Federal poly technic Nekede, and willing to further, with the hopes that his husband will, But the marriage collapse after he didn't fulfill his promises.

"We men of God we don't condemn people, if not I would have condemned her the first place when I look at the way she is on Facebook.

Divine also made a revelation in the conversation how he was not allowed to follow due process by meeting the father of the bride but meeting a fake father relative. Claiming that he went to see the father (who had separated from the mother 15 years agoo) alone to received his marital blessings.

He said the mother had pressured him that he will send her daughter back to school else she will take her daughter but he agreed just to let things fly. He also admitted that he agreed on sending her to school but he demanded to see her OND result which she couldn't provide.

In my opinion, Prophet Divine should have considered somethings before taking such marriage instead of saying he doesn't want to condemn.

Firstly as a man of God, he shouldn't have marry in his own understanding and he should have given God privilege before taking that decision of marrying a strange woman.

Secondly, He shouldn't have proceed to the marriage after seeing that it was the mother of the bride that his overseeing the marriage.

Finally he should have condemned every irregularities when the ball was still in his court and not when the opponent has taken it. what is your opinion? Share your thought with us

Watch the conversation on LIB Instagram page through the below link