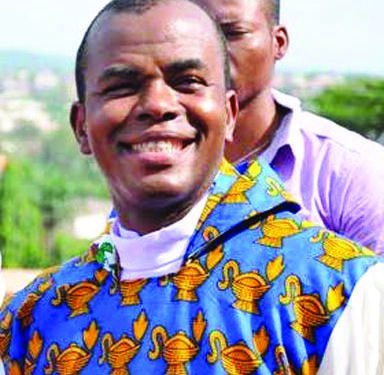 Interestingly, the Spiritual Director of the Adoration Ministry, Enugu, Anambra State, Rev. Fr. Ejike Mbaka, who successfully prophesied the removal of the immediate past governor of Imo State, Emeka Ihedioha, claims to have not only the power of prophecy but also the power of counter-prophecy.  According to him, the prophecy was fulfilled because of Ihedioha’s inaction after the prophet had made the prophecy.

Mbaka had expected Ihedioha to take action against the prophecy. He was quoted as saying:   “What’s the distance from Imo State to Enugu, that after giving the message on December 31, 2019, Ihedioha cannot come to adoration and seek God’s intervention, rather he embarked on attacking and castigating the message and the messenger…. I think that when a message like that is given, the right thing to do is to ask the prophet what to do to avert it.”

It’s intriguing that Mbaka thought Ihedioha should have consulted him to counter the prophecy. Can a seer cancel what he saw?  If it’s possible for a prophet to counter his prophecy, where is the power of the prophecy? Supposing Ihedioha had consulted Mbaka to reverse the prophecy, would he have done so, and would that have resulted in victory for the removed governor at the Supreme Court?

Mbaka is enjoying the public attention that followed the fulfillment of his prophecy that Hope Uzodinma would become Imo State Governor after Ihedioha’s removal. Mbaka had said: “In spite of all that will happen this 2020, there is hope. In Imo State, there is hope. Imo people have suffered (but) God is raising a new hope that would be an agent of salvation for them.”

The priest shed light on his prophecy, and spoke of someone “coming with a new flag,” and “a new leadership that will break barriers,” and “a new government in Imo.”  For clarity’s sake, he declared: “I bless Hope Uzodinma, and empower him to spiritually take over.”

It’s food for thought that the Supreme Court judgement of January 14 was consistent with Mbaka’s prophecy.  It was bragging time, and a euphoric Mbaka took advantage of it.

His spokesman, Maximus Ugwuoke, said in a statement:  “Uzodinma becoming the governor of Imo was just a part of the about 40 prophetic prayers Fr. Mbaka made on December 31. But that became the only issue people satanically picked against him.

“God has vindicated Fr. Mbaka as He has always done for Fr. Mbaka and adoration ministry in all the battles, vituperations and attacks the ministry had faced in the past. To God be the glory.”

The spokesman crowed:  “We are not all gifted alike, Fr. Mbaka’s prophetic gift should be a source of pride for the Catholic Church and indeed all true Christians as a living evidence of divine presence within the  Church. As a lawyer, I tell you that there are double fold angles to this miracle.

“One is the miraculous resuscitation of Hope Uzodinma from the far away position he was placed in the election result announced by INEC in Imo State. The second is the unanimous confirmation of the seven Justices of the Supreme Court (without a dissent view) that Uzodinma was the rightful winner of the election.”

It’s unclear when Mbaka, who was ordained a priest of the Roman Catholic Church on July 29, 1995, began to make prophecies. His greatest prophecy must be the one about the victory of Muhammadu Buhari over then incumbent President Goodluck Jonathan in 2015.When the prophecy happened, the prophet became the one to watch.

But the prophet was wrong when in 2018 he told President Buhari to forget about reelection. Mbaka had said: “As I was waiting on the Lord, I’m asked to advise you, don’t come out for second tenure; after this, retire peacefully. Come back to yourself or you will cry by the time you will be sent out of office. Those who are encouraging you to come out and run again want to disgrace you shamefully and publicly.” Buhari was reelected.

Successful political prophecies bring rewards.  Mbaka was at the Government House in Owerri, the Imo State capital, on the day Uzodinma was sworn in as governor. A report quoted a source as saying:  “Fr. Mbaka was here… He was the one who dedicated the governor’s office. He was here for over three hours. He came with another priest, Fr. Otimbodombo and his church workers.”

But the priest didn’t go to Heroes Square Arena, where the new governor was sworn in. Isn’t he a hero of sorts, having successfully prophesied Ihedioha’s fall and Uzodinma’s rise?  He may well have avoided further controversy by avoiding the arena.

Mbaka’s prophetic performance reignited a debate about priests as prophets, and prophets as priests.  Not surprisingly, Mbaka argued for prophetic performers. The prophet said:  “Those who are advocating banning prophecy are ungodly.  The Catholic Church is a prophetic church. Stopping prophecy is closing the mouth of the Holy Spirit. The church will ordain you a priest, baptize you, and confirm you in the name of the Father, Son and Holy Spirit; when you start doing the work of the Holy Spirit, the same church will attack you. This is uncalled for.”

The prophet is aware that some people consider his prophetic success regarding the Imo State governorship election too good to be true. His response: ”Some of you who are saying that I’m an APC man and I collect money for prophecy should stop talking. If it is a question of money Goodluck Jonathan wouldn’t have lost the 2015 presidential election because they were ready to give me everything provided they retained the seat. The message is not partisan, I’m not a politician, I am a prophet of God.”

However, in Ihedioha’s case, it’s suspicious that the prophet said he had expected the former governor to consult him on how to reverse the prophecy. It seems Mbaka speaks out of both sides of his mouth.