By MarcellaAgnes (self media writer) | 2 years ago

The Bible is the collection of books that the Catholic Church decided could be read at Mass. It is a collection of books written by different authors with different writing styles over thousands of years for different audiences. It is not a manual on how to run a religion or build a church. Those things already existed before the Bible was assembled. The Didache is the earliest manual on how to run a Church. In modern times, the Catholic Church is governed by Canon Law and the Catechism which are based on Scripture.

At the time of Jesus, the Sadducees that taught and worshiped at the Temple in Jerusalem considered only the 5 books of Moses to be the word of God. The Pharisees in Jerusalem, that taught and worshiped in the Synagogues, considered the 5 books of Moses, the writings of the Prophets, the Psalms, and some of the historical writings as Scripture. Their Canon of Scripture is referred to as the Palestinian Canon and contained 24 books.

This is a basic history of the Bible.

In 136AD, after the Bar Kokhba revolt, the Jews declared that the 7 extra books of Alexandrian Canon were not to be considered scripture because they were used by the Christians. The Hebrew Masoretic Text of 24 books was established as their Scripture. The 24 books were later reorganized into the 39 books of the current Protestant Old Testament.

The oldest list of the New Testament books is on incomplete scrap of parchment known as the Muratorian fragment from around 170AD. It lists the Gospels of Matthew, Mark, Luke, and John, Acts, 1st and 2nd Corinthians, Ephesians, Philippians, Colossians, Galatians, 1st and 2nd Thessalonians, Romans, Philemon, Titus, 1st and 2nd Timothy, Jude, 1st and 2nd John, Wisdom of Solomon, Revelation of John, Revelation of Peter as scripture.

In 360AD the Council of Laodicea listed a canon of scripture that had 26 of the 27 books of the New Testament leaving off the Book of Revelation.

In 367AD Bishop Athanasius of Alexandria listed the 27 books of the New Testament in his Easter letter sent to his Churches.

In 397AD the Council of Carthage again under Augustine came up with the same list and sent it to Rome for approval.

In 405AD Pope Innocent I listed the 27 books of the New Testament and 46 books of Old Testament in his Easter letter to the Bishop of Lyon in France.

In 787AD the Second Council of Nicaea accepted the decrees of previous smaller Councils. This included the Canon of Scripture determined in 397 by the Council of Carthage.

In 1441 the Council of Florence approved the list of books accepted by the Councils of Rome, Hippo and Carthage.

This is why there is a difference today between the Protestant and Catholic Bibles. It wasn't until the end of the 300s that the New Testament Scriptures were established. The Didache, the Shepherd of Hermas, 1st Clement to the Corinthians, and the Epistle of Barnabas were read in many early Churches. The Book of Revelation, 2 Peter, 2 and 3 John, Jude, James and the Book of Hebrews were considered questionable by many. The Catholic Church that teaches that baptism forgives sins, that Jesus is present in the Eucharist, and that the Bishop of Rome was the head of the Church, is the Church that decided which books are the divinely inspired words of God. No other church can claim that. The Bible contains divinely inspired writings. But they need to be interpreted. The thousands of different protestant churches have different interpretations of these divinely inspired writings. The Catholic Church has the oldest and original understanding of these writings. The Pope is the successor of the minister that Jesus left behind to feed His sheep and tend His flock. This same Jesus promised to be with His Church to the end of time (Matt28:20). Jesus didn't leave us a book to put our trust in, He left us a Church to teach us what He taught the Apostles. We put our trust in the Church Jesus founded, not a book or a man. No other church claims to have developed the list of the books in the Bible, they all inherited it from the Catholic Church. 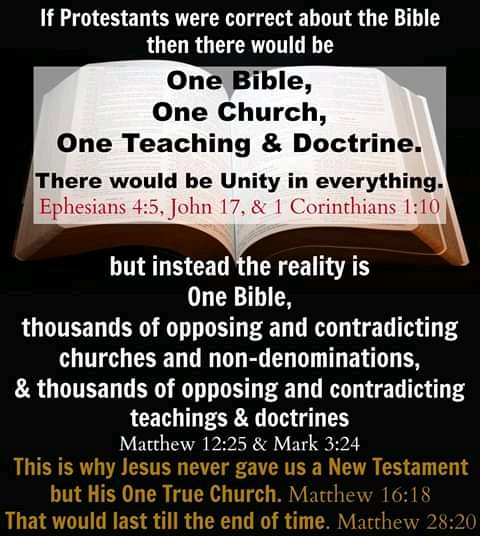