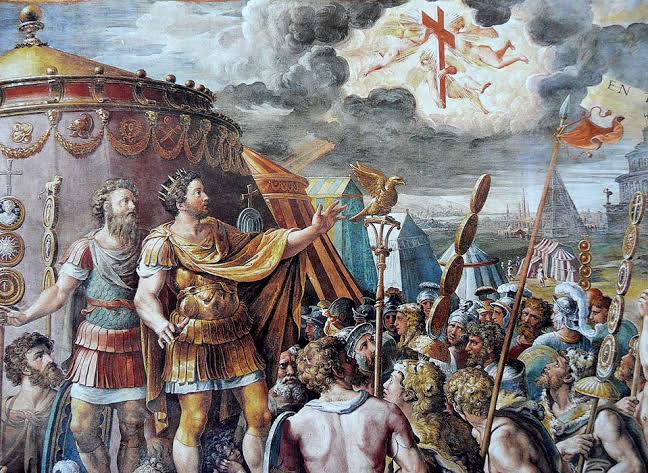 Before the Milvian battle took place, Constantine and his Soldiers saw a cross made of light in the sky and it was above the sun, there were also words in Greek which were written on it and when translated to English, it would mean "in this sign, conquer". That same night, Constantine already had a dream were our Lord Jesus Christ appeared to him and told him to use the sign of the cross against his enemy in order to win the war. He was so confident about the dream that before the war began, he had the symbol of the sign of the cross marked on the shield of his soldiers.

Later on, he won the battle and after winning it, he attributed his victory to the Christian God. He eventually converted to Christianity and also ordered that the prosecution of Christians through out Rome should be stopped. He later established Christianity as a religion in the Roman empire. An interesting fact about Constantine is that he considered himself as a thirteenth apostle of our Lord Jesus Christ, before he died, he had already built many churches and settled differences between church leaders. He also personally attended the council of Nicaea of the Catholic Church which was responsible for implementing the doctrine of the blessed Trinity and also deciding which books that would be added to the Bible.