"Before You Take Off, Consider The Landing". Pastor Adeboye Fires Back At Critics Of His Sermon.

Society is no doubt riddled with Misandrists, Pseudo-Feminists and narcissists. At such, anything that goes against the ideology of these sets of persons will most definitely spark public outrage.

We live in a society where gender equality is only needed when the narrative is easy. But when it comes to expendability, then the voices are silent. It is only normal for men to go the top of electricity cables to fix faults but not suitable for women. And digging trenches and driving heavy duty vehicles are never what women should do even to the feminists and gender equality advocators.

Is that not too condescending?

The general overseer of the Redeemed Christian Church Of God and respected man of God Pastor Enoch Adejare Adeboye recently celebrated his wife on the occasion of her 72nd birthday. While heaping praises and eulogising pastor Mrs Foluke Adeboye popularly known as the mother in Isreal by the members of the Redeemed Christian Church of God, the humble and soft spoken man of God said his wife is very submissive despite being a very powerful woman. He went further to tell women to be very submissive to their husbands irrespective of their position and power. He cited many references from the scriptures.

But the statement despite backing it up with bible has not gone well with some people in the society and it has since sparked media and social platforms war between the "children of the man of God and others who perceived the statement as being styled on patriarchal terrain. 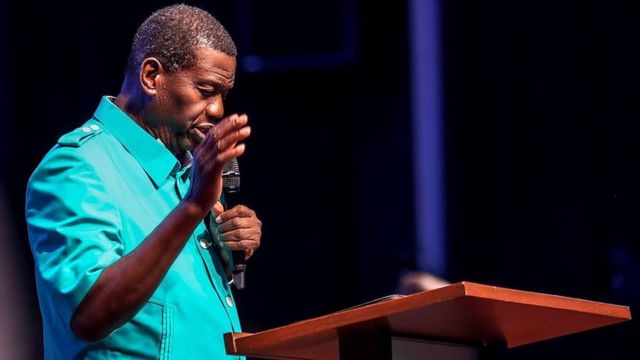 The feminists believe such statements is too demeaning to the female folks irrespective of what the bible says. Some celebrities have gone to throw their weights behind Baba Adeboye while others have condemned him for asking that women be submissive to their husbands.

Baba in response to the critics of his of his sermon has said he was not talking to the General public but his children. Like the proverbial lost sheeps of the Israelites.

He said the outcome of pandemic has made it very difficult for him to reach his targeted congregation and at such, everyone now has access to his words.

According to him, there are some words that are meant only for one's children and when such words find its place to the public, it becomes a problem.

He went further to say he is not concerned by what people say and would keep on moving with the King (God). He concluded by saying people only see the glory without knowing the story and that before people take off, they should consider the landing.

This is not the first time Baba has been attacked over marital issues, there was a time he advised the members of his congregation to only marry from the church as they are already large enough which also did not go well with the society.

But Pastor Adeboye is no doubt a very wise man of God and only the foolish ones would despise his counsel.

What do you think about this issue?