How Days Of The Week Derived Their Names From Pagan gods

By Timtrendz (self media writer) | 1 year ago

The English names for the days of the week are Monday, Tuesday, Wednesday, Thursday, Friday and Saturday. These names originated from Romans. The Romans named the days of the week after the Sun and the Moon and five planets. These were also the names of their gods.The gods and planets were Mars, Mercury, Jupiter, Venus and Saturn. 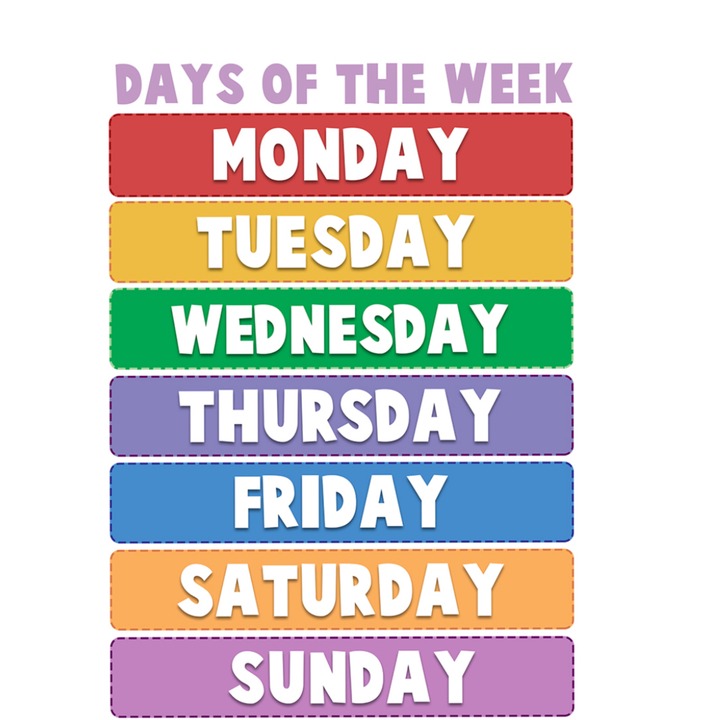 Saturday, Sunday and Monday are named after the celestrial bodies, Saturn, Sun and Moon, but the other days are named after Germanic gods, Tuesday (Tiw's day), Wednesday (Woden's day), Thursday (Thor's day) and Friday (Freya's day) 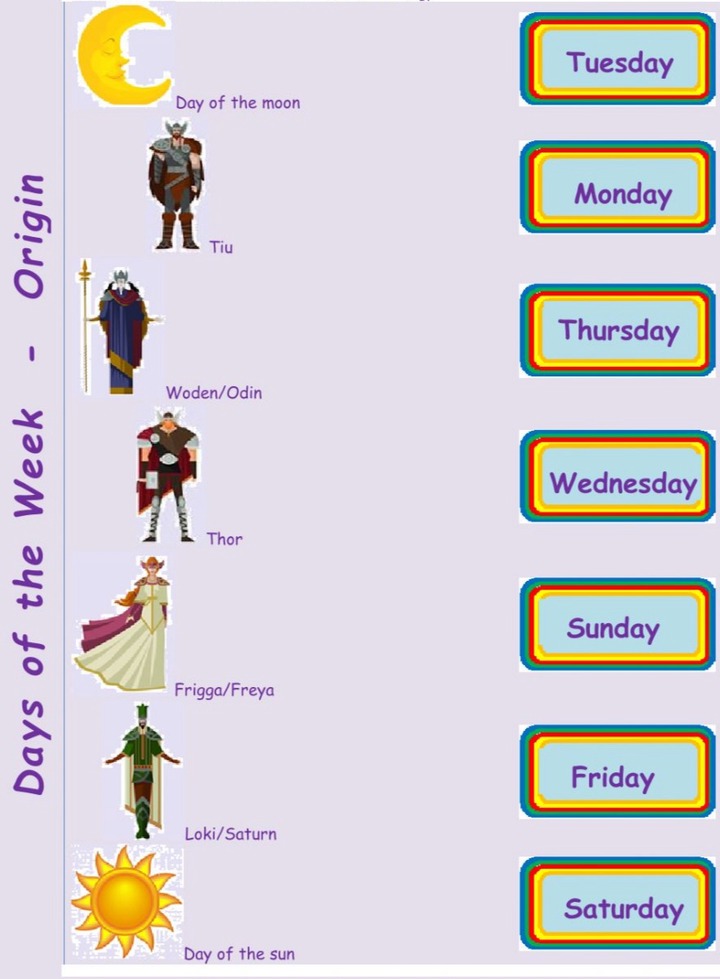 SUNDAY(The day of the SUN)

Sunday derives it name from Old English, “Sunnandæg." Sunnandæg is from a Germanic interpretation of the Latin dies solis which means "sun's day." Germanic and Norse mythology personify the sun as a goddess named Sunna or Sól. 'Sol' means Sun. Over time, the day of the sun became Sunday.

The English name for Monday comes from the Anglo-Saxon word Mōnandæg, which loosely means “the moon’s day.” Mōna is the word for moon in Old English. Monday as the second day of the week has been classified as the moon’s day since Babylonian times.

The Babylonians were the people who decided on a seven-day week. Ancient Romans followed the same pattern. For the Romans, every planet had an associated god or goddess, and Luna was the goddess that personified the moon.

Tuesday was named after the Roman god of war, Mars. Tuesday comes from the Old English tīwesdæg, meaning “Tiu’s day.” Tiu was a Germanic god of the sky and war.

In Norse mythology, Týr is one of the gods. He is primarily known as the god of justice and war. He is also described as wise and brave. It is Týr who has given his name to Tuesday. 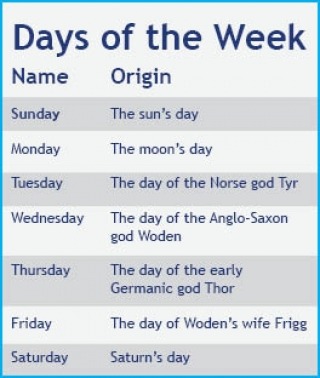 The name Wednesday actually comes from two mighty but distinct gods. The Old English word for Wednesday indicates that the day was named for the Germanic god Woden.

In Romance languages, the name is derived from the Roman god Mercury. (For example, Wednesday is mercredi in French and miercuri in Romanian.) Mercury was the messenger to the gods, along with being the patron of science, the arts, travelers, and athletes.

Thursday got its name from Thor. Thor is the Norse god of thunder and lightning. It’s from this Norse god that we see the Latin word "dies Jovis" which means (day of Jupiter) . Jupiter is also known as Jove, the supreme Roman god and patron of the Roman state. Jupiter's day became Thor’s day and eventually Thursday.

Saturday comes from Saturn. Saturn is the Roman god of agriculture. In Ancient Greek it is known as Cronos. In Latin there is "dies Saturn" (day of Saturni). Saturday therfore is Saturn’s day.