Igbo diety: What No One Ever Told You About Amadioha (God of Lightening and thunder)

By Kayp (self media writer) | 1 year ago 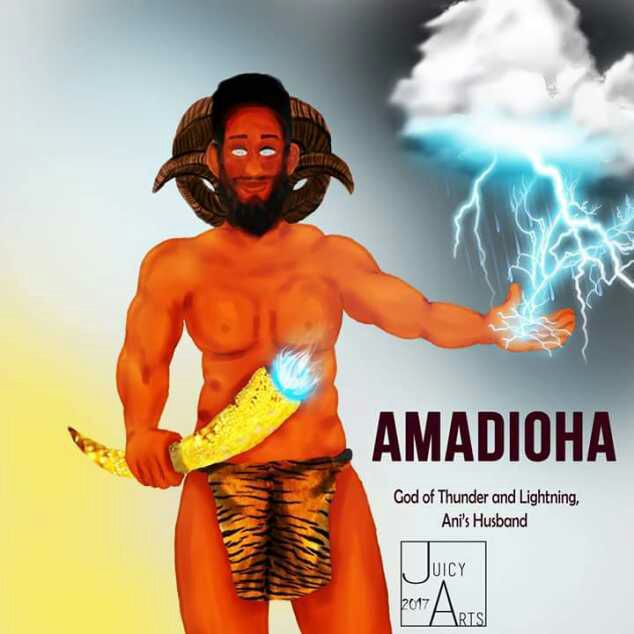 AMADIOHA also known as Amadiora, Kamalu (which is short for Kalu Akanu), Kamanu,Kanu or Ofufe is the Alusi (Deity) of Thunder and Lightning.

Amadioha means The man of the People or the Free will of the people.

Astrologically,his governing planet is the Sun.

His day is Afo, which is the third market day of the Igbo four days week.

His Skin color is red, and his symbol is a white ram. Amadioha is well known by other diety for his handsomeness and he is the fairest of all, (no wonder Ani don't joke with him, lols).

According to Wikipedia these are Functions of Amadioha.

God of Justice-Amadioha is first and foremost known as a god of justice. He speaks through thunder, and he strikes with lightning. He creates thunder and lightning by casting “thunderstones”down to earth. Persons judged guilty by Amadioha are either killed by lightning (which leaves a black mark on the forehead) or attacked by a swarm of bees.

The property of the victim is usually taken by the priests of Amadioha, and the body is left unburied and the victim unmourned, as the punishment is considered to be a righteous one from God.

In some parts of Igboland, Amadioha is used as a curse word. Oaths are often sworn to him, which can carry deadly penalties when broken.The ritual cleansing for Amadioha is very costly and tasking. The deity can only be appeased by transferring the curse to a live goat that is let loose outside of the walls of the community. The ram is a common offering for him. The priestly clan of Amadioha are known as Umuamadi, which translates to children of Amadioha.

God of Love, Peace and Unity- Besides justice, Amadioha is also a god of love, peace and unity, and is prayed for increase of crops, children in the home, and benevolence. Aside the above manifestations of Amadioha, he represents, as different from most African religious world views, a messianic hope for those in critical situations.

Creator god-Amadioha is also considered to be a creator god. In some traditions, human beings were made by him when he sent a bolt of lightning down to strike a silk cotton tree, which split and revealed aman and a woman.Consort to AniAmadioha is often shown as a husband to Ani, who is the Earth mother. In some Igbo traditions, the pair are said to be the firstAlusito have been created by Chukwu. The two are often honored with Mbari houses, which were made with mudbrick. Amadioha is typically depicted as a fair-skinned, titled gentleman of cool temper who is the patron of “light skinned Igbos” and “men of exalted rank.” While Ani is considered to be the lawmaker of Igbo society (which is known as Odinani), Amadioha is the enforcer and protector of the law.God of CarversIn the play, the Other Side of the Mask, the character Jamike refers to Amadioha as “the god of carvers” and identifies him further as “the god that sends lightning to kill the evil spirits who inhabit the trees from which carvers hew their wood.

Personal Spirit-Amadioha as a personal shrine is a spirit of enterprise that brings wealth. It is also a representative of the head of the household.

OracleI n precolonial times, the village of Ozuzu turned Amadioha/Kamaluinto an oracle called Kamalu Ozuzu. People would travel all over Igboland to visit the oracle in order to settle disputes and for help with crucial decisions. Parties found guilty by the oracle could be sold into slavery.

Content created and supplied by: Kayp (via Opera News )