By NaijaReacts (self meida writer) | 1 months

I have been a dedicated Catholic since birth, but the concept of purgatory existence has been one of the doctrines of the Church that I wouldn't stand to defend as a Catholic until yesterday.

I took out time yesterday, and went to the parish of my friend who is a Catholic Priest, Rev. Fr. Okechukwu, and asked if he could enlightened me with the proves of the existence of Purgatory, and the need of praying for the dead. Happily, I wasn't disappointed.

This article is suitable for Catholics, who want to know deeper about the teaching of purgatory; and to every other persons, who are willing to digest some proves, and learn new things. In this article, I am going to point out different Bible verses that would clarify if truly the existence of Purgatory is biblical.

From good number of facts that I got from my friend-priest, Fr. Okey; the exact word "Purgatory", was not mentioned in the Bible, but its meaning was clearly stated in the Holy Bible. Just like the words "Inacarnation", "Trinity", "Rapture" and "Bible" are not to be found in the Holy Bible, yet the meanings are there.

According to the Gospel of St. John chapter 21 verse 25; "not all things were written in the Bible".

People accused Catholic Church of inventing the doctrine, but the truth is that, even before the Catholic Church existed in 33AD, many Jews in the Old Testament had already believed in the state of atonement of sins after a person died (2Mac.12:42-46).

Some, most frequently, misunderstood the teaching of the Church and alleged it as unbiblical. But the question should be; "is the concept of purgatory really not in the Bible"?

WHAT PURGATORY IS NOT:

Purgatory is not a second chance for the damned souls to repent. Instead, it is a state of cleansing and purification for souls destined for Heaven. Purgatory also, is not a means to earn our way to Heaven, but a gift from God to prepare us to see Him face to face.

Let us look into the meaning of the word "Purgatory", and consider some statements that were made in the Holy Bible, which have greater reference to this topic.

The word "Purgatory" was derived from Latin word "Purgationem" and is related to the verb "to purge", which means to cleanse or to purify. ~According to Wikipedia. 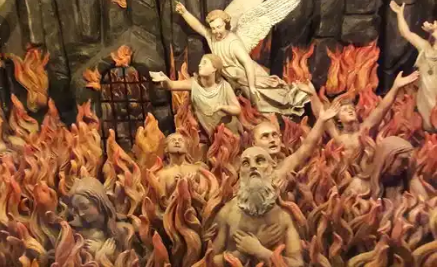 Purgatory is that purification which those imperfect souls who have died in God's grace and friendship, must undergo.

It is the final purification of the elect, which is entirely different from the punishment of the damned. ~According to Catholic teachings.

Implicitly, the concept of purgatory was made known from the idea of praying for the dead.

In the necessitates for the belief of purgatory, consider that if the dead are in hell, our prayers could do no good to them; if they are in heaven, then they have no need of our prayers. Therefore, there must be some third place (neither in Heaven nor in hell), where the souls of the dead can benefit from our prayers. 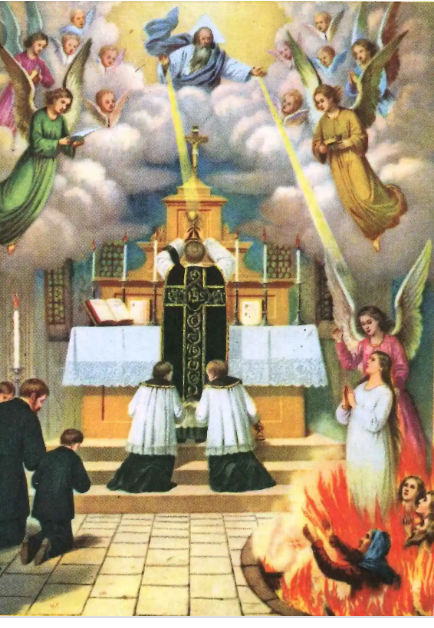 Let us recall that in the book of Job; when Job received the news of his sons and daughters' sudden demise, he prayed for them.

Again, in the book of 2nd Maccabees chapter 12 verse 43, Judas Maccabeus sent twelve thousand drachmas of silver to Jerusalem, for sacrifices to be offered for the sins of the dead.

The concept of purgatory is also explicitly presented in the Bible. Let us consider the Gospel of Mathew chapter 12 verse 31, Jesus said: "the sin of blasphemy against the Holy Spirit cannot be forgiven in this life or 'in the next".

That statement made it clear that some sins could be forgiven in the next life (i.e. the punishment of sin, not the guilt of sin).

Likewise, St. Paul states that some who have died will be purified as by fire: "If any man's work burn, he shall suffer loss; but he himself shall be saved, yet so as by fire" (1Corinthians 3:11-15). 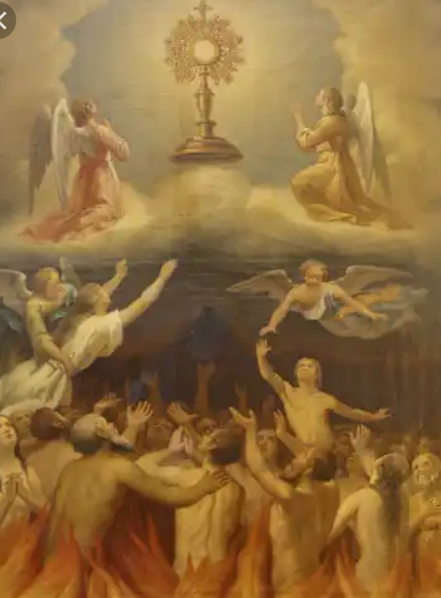 Purgatory therefore, should be considered as a great and extremely generous gift from the LORD. It is a place in which the souls of the deceased faithful, who though, dying in the grace of God, are yet burdened with some small sins not yet atoned for, suffer temporal punishment before becoming purified from all sins.

PURGATORY IS NOT ANOTHER HELL:

What is true and immensely important is that purgatory is not eternal, but hell fire is.

Christ spoke of a prison in the future life, from which no man comes out until he has paid the last farthing.

According to the Gospel of St. Mathew chapter 5 verse 26, Jesus said: "Amen I say to thee, thou shalt not come out from thence till thou repay the last farthing".

This prison cannot be the same as hell, because in hell, there is never any release; it must be then, a place of purification.

It implies also, that there is remittance for some sins in the next world; but this can be neither in heaven nor in hell, consequently in purgatory.

Be aware that the simple separation of the soul from the body (through earthly death) does not make the sinful soul pure, and yet, God cannot reject them as the hardened sinners in hell; there must then be a middle place, where those who have departed not free from stain, must be purified. 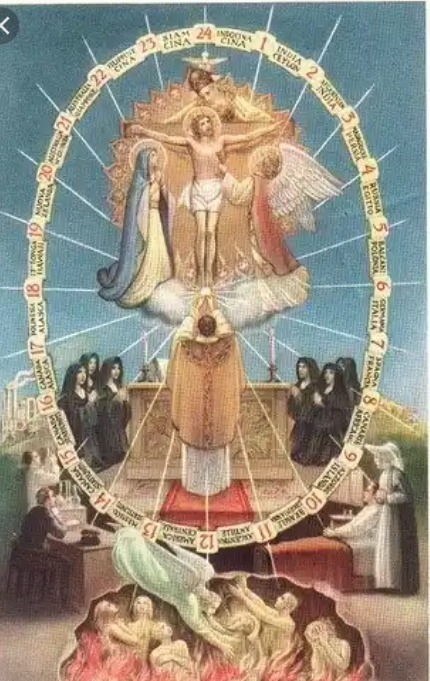 THE STATE OF PURIFICATION:

The Catholic Church call that state of cleansing or purification as "Purgatory", as the word emplies "purging". It can also be called anything that still means to "cleans".

Jesus in the Gospel talks about this correction, and indirectly Purgatory, at the end of His parable on forgiveness in Mattew 18:34-35 as He says: "and in anger his lord delivered him to the jailers (torturers), 'till he should pay all his debt. So also my heavenly Father will do to every one of you, if you do not forgive your brother from your heart."

In the above passage, there was no mention of God punishing very serious sinners, but only those who sinned by not forgiving others. Also the punishment referred to here was not eternal as in hell (Mark 9:47- 48), but only temporary, that is why the clause "till he should pay all his debt" was used.

The Holy Bible also stated that: "nothing unclean shall enter Heaven..." (Revelation of St. John The Cross chapter 21 verse 27). These souls need to be purged of all "uncleanness", no matter how slight before seeing God face to face (Revelation 22:3-5).

Eventually, it would be right to say that all souls in Purgatory would go to Heaven after being purified.

In addition, St. Paul makes allusions to this in terms of fire in his Epistle to the Corinthians:

"If the work which any man has built on the foundation survives, he will receive a reward. If any man's work is BURNED up, he will suffer loss, though he himself will be SAVED, but only as THROUGH FIRE (1 Cor 3:12-15).

The clause, "he will suffer loss," implies temporary hardship and punishment, "even though he will be saved". This state of purification is not Hell, because in hell you will no longer be saved there. It is not also Heaven because heaven is not a burning fire.

2 Maccabees 12:44 stated: "if he had not believed that the dead would be raised, it would have been foolish and useless to pray for them".

It is therefore a holy and wholesome thought to pray for the dead, that they might be loosed from sins.

Fr. Okechukwu further adviced me not to let myself be led away by some arguments from those who not only believe in no purgatory, but even in no hell, so that they may sin with so much more impunity.

Instead, I and every other persons should certainly offer prayers and good works for all the faithful departed, and since we are more under obligation to some, some are more pleasing to God, some need assistance more, some deserve it more than others. 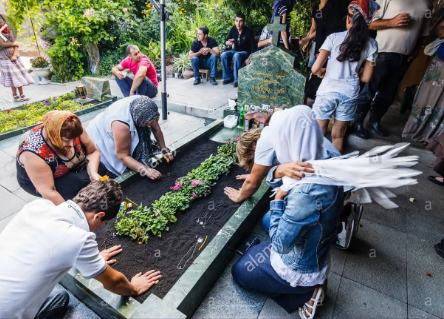 From the brief discussion I had with:

Stretch Forth Your Hand And Say These Prayers Before You Sleep Tonight.