2023: Meet Moses Ayom That Bishops And Muslim Clerics Asked To Run For Presidency

As the 2023 General Elections draw closer, the race of who succeeds President Muhammadu Buhari has begun which each geopolitical zone showing interest in the plum job. Meanwhile, a businessman-turned politician, Mr. Moses Ayom from North-central has got a push for the office by the religious clerics.

Early this month, Mr. Ayom came into the 2023 presidency radar when the conference of Middle Belt Bishops paid him a courtesy visit and asked him to contest for the presidential ticket of the All Progressives Congress (APC). This is contained in a report published by This Day. 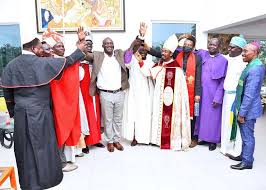 According to the leader of the delegates, Williams, they are a trans-denominational coalition of passionate clergymen and servants, who believe in the indivisibility of Nigeria as one nation under God with great potentials, which have failed to be utilized to the fullest capacity.

The bishops who claimed to have had extensive prayers and a careful sifting of the galaxy of stars concluded that the businessman was the best option that possesses all that it takes to provide credible leadership to Nigeria.

On Wednesday, barely 7 days after the group of Bishops had begged Ayom to seek a Presidential ticket, the League of Imams in Northcentral states made the same plea to the industrialist. This is contained in a report published by the Punch.

The Islamic clerics who were drawn from different Northern states declared their support and backed him to succeed President Buhari come 2023.

They urged the businessman, to, in the name of the Muslim Ummah in the region “answer the call of duty loudly proclaimed by the people of the Middle Belt across political and faith lines.”

The League said: “Our brother, we firmly believe that your presidential candidature is one of unity. At a very critical time like this, Nigeria requires a President who shall be trusted by its diverse peoples"

Photo of the league of Muslim clerics and Ayom 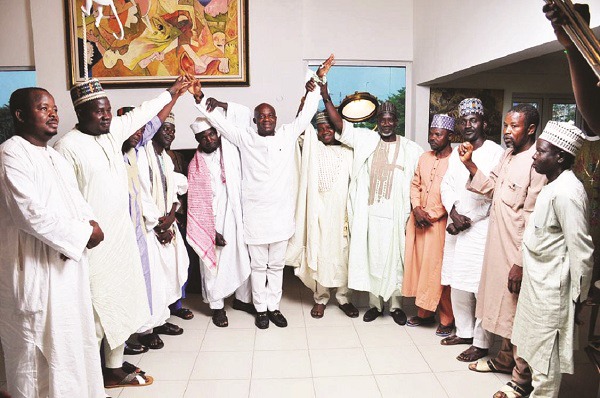 The group further maintained being a Christian is not an issue to them saying competence should be a priority and being ready to support Ayom because he has the quality. They further noted that Muslims supported Olusegun Obasanjo and Goodluck Jonathan despite they are Christians.

He is a Nigerian business tycoon, hails from Benue State, North-Central of Nigeria. He has a league of companies ranging from construction, real estate, hospitality, and others.

Ayom is one of the most successful major players in the new sprawling business city of Shenzhen where he owns several real estates. China seemed to have become his proverbial last bust stop because he was enamored by the Chinese indefatigable spirits and their quest for excellence.

In 2016, he was among the members of the Presidential Trade Delegation to China where President Muhammadu Buhari and the Chinese President witnessed as he signed a mining agreement with the World's largest manufacturer of mining equipment, SBL Limited to develop Africa's largest Granite and Marble located in Ogun State.

Ayom is believed to run seek his presidential ambition on the platform of the All Progressive Congress, APC. However, he has no history of holding an elective position before.