The History Of Abel In The Bible

By SundayIkhane (self media writer) | 2 years ago 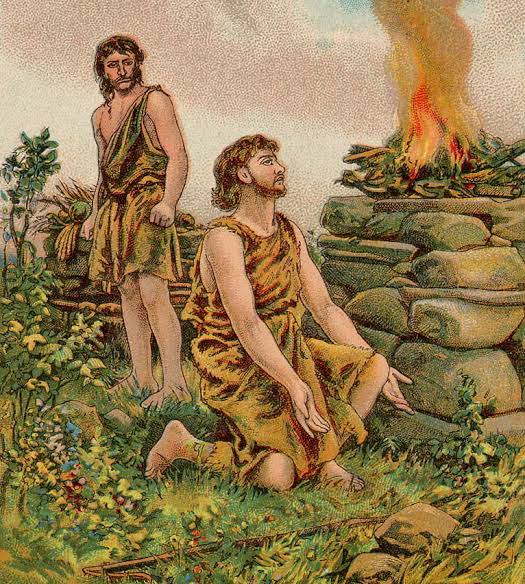 ā´bel ( ה בל , hebhel ; Ἄβελ , Ábel ; Westcott and Hort, The New Testament in Greek Hábel ; etymology uncertain. Some translation "a breath," "vapor," "transitoriness," which are suggestive of his brief existence and tragic end; others take it to be a variant of Jabal, yābhāl , "shepherd" or "herdman," Genesis 4:20 . Compare Assyrian ablu and Babylonian abil , "son"): The second son of Adam and Eve. The absence of the verb hārāh (Genesis 4:2; compare Genesis 4:1 ) has been taken to imply, perhaps truly, that Cain and Abel were twins.

"Abel was a keeper of sheep, but Cain was a tiller of the ground," thus representing the two fundamental pursuits of civilized life, the two earliest subdivisions of the human race. On the Hebrew tradition of the superiority of the pastoral over agricultural and city life, The narrative may possibly bear witness to the primitive idea that pastoral life was more pleasing to Yahweh than husbandry.

"In process of time," the two brothers came in a solemn manner to sacrifice unto Yahweh, in order to express their gratitude to Him whose tenants they were in the land (Genesis 4:3 , Genesis 4:4 . See SACRIFICE ). How Yahweh signified His acceptance of the one offering and rejection of the other, we are not told. That it was due to the difference in the material of the sacrifice or in their manner of offering was probably the belief among the early Israelites, who regarded animal offerings as superior to cereal offerings. Both kinds, however, were fully in accord with Hebrew law and custom. It has been suggested that the Septuagint rendering of Genesis 4:7 makes Cain's offense a ritual one, the offering not being "correctly" made or rightly divided, and hence rejected as irregular. "If thou makest a proper offering, but dost not cut in pieces rightly, art thou not in fault? Be still!" The Septuagint evidently took the rebuke to turn upon Cain's neglect to prepare his offering according to strict ceremonial requirements. διέλῃς , diélēs (Septuagint in the place cited.), however, implies נתח , (אנתּח nāthaḥ (nattaḥ ), and would only apply to animal sacrifices. Compare Exodus 29:17; Leviticus 8:20; Judges 19:29; 1 Kings 18:23; and see COUCH .

The true reason for the Divine preference is doubtless to be found in the disposition of the brothers (see CAIN ). Well-doing consisted not in the outward offering (Genesis 4:7 ) but in the right state of mind and feeling. The acceptability depends on the inner motives and moral characters of the offerers. "By faith Abel offered unto God a more excellent (abundant, pleı́ōna ) sacrifice than Cain" (Hebrews 11:4 ). The "more abundant sacrifice," Westcott thinks, "suggests the deeper gratitude of Abel, and shows a fuller sense of the claims of God" to the best. Cain's "works (the collective expression of his inner life) were evil, and his brother's righteous" (1 John 3:12 ). "It would be an outrage if the gods looked to gifts and sacrifices and not to the soul" (Alcibiades II.149E.150A). Cain's heart was no longer pure; it had a criminal propensity, springing from envy and jealousy, which rendered both his offering and person unacceptable. His evil works and hatred of his brother culminated in the act of murder, specifically evoked by the opposite character of Abel's works and the acceptance of his offering. The evil man cannot endure the sight of goodness in another.

Abel ranks as the first martyr (Matthew 23:35 ), whose blood cried for vengeance (Genesis 4:10; compare Revelation 6:9 , Revelation 6:10 ) and brought despair (Genesis 4:13 ), whereas that of Jesus appeals to God for forgiveness and speaks peace (Hebrews 12:24 ) and is preferred before Abel's.

The first two brothers in history stand as the types and representatives of the two main and enduring divisions of mankind, and bear witness to the absolute antithesis and eternal enmity between good and evil.

Content created and supplied by: SundayIkhane (via Opera News )