By Sirax (self media writer) | 6 months ago

During the 19th century, Zamfara, Gobir and Kebbi were considered to be some of the most powerful states. Kano on the other hand existed but was only a place were people conducted commercial activities. The Jukuns then invaded Kano and subjected Hausa men to them. Due to this invasion, there was serious tension in the Hausa land. Many Kings began emerging and some were displaced. 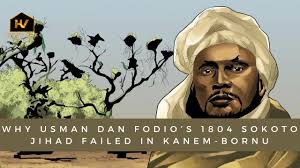 There was also religious tension, due to this religious tension, Usman Danfodio decided to stop it. He studied Islamic studies in Egypt and after studying, the religious leaders then decided to make him a chief. He started to become every popular and this made many Kings to be threatened by his presence. Due to his flamed and influence, the King wanted to kill him. He had to run and hide for his life, as a result of this, while hiding, he launched the Jihad war. One of the reasons why they launched the Jihad is because the Hausa people we're accused of allowing Pagan practices to corrupt Islam so Usman Danfodio took the war as an opportunity to purify Islam.