By Dhavey (self media writer) | 2 years ago 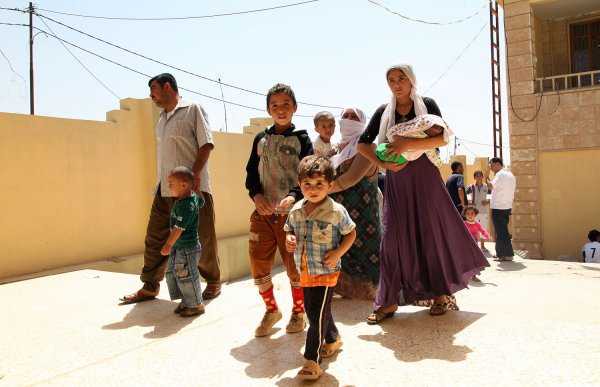 Muslims dislodged by ISIS are grasping Christianity because of the observer of their kids, who share with their folks the adoration for Christ.

A service executive working at an exile in northern Iraq revealed to Christian Aid Mission that as of late, 600 kids went to a program put on by the service, where they got Bibles and heard the gospel.

In the wake of finding out about Jesus, one 10-year-old kid chose to place his confidence in Christ for salvation, the service chief said.

"That night, we requested that the children go educate their folks concerning what they had heard and share the tale of Jesus with everybody," the executive said. "Mahmood's dad came the following day grumbling to us about our impact in his child's choice to acknowledge Christ."

As a Muslim, the kid's dad was vexed and dreadful of network reaction in the wake of hearing his child state, "I turned into a devotee of Christ."

"His dad had never heard a word about Jesus, so he allowed us the chance to inform him concerning Christ and His salvation," the chief said. "Not long from that point forward, he acknowledged Christ and took Bibles for his better half and two little girls."

The service chief uncovered that different guardians likewise moved toward the service executive with grumblings about their kids. Be that as it may, they, as well, wound up tolerating Chris. He gave them Bibles, and they told others of the harmony and euphoria they had found in Jesus.

"Mahmood's dad currently has a Bible report in his home each Friday at 10 a.m. – the Muslim petition day!" the chief said.

As of late, the service group went to a town in western Iran known to have connections to Islamic fanaticism. In the wake of investing energy in supplication, the evangelists went to the place of the town senior, strict pioneer Kaka Shehab, and informed him regarding Christ. His girl was sick with asthma, so they petitioned God for her before leaving him with a Kurdish-language Bible, the chief said.

"The following day," he stated, "he called us and stated, 'My little girl has recuperated, on account of your petitions. It would be ideal if you return to the town and implore in each house and for everybody a similar petition that you appealed to God for her, and offer Bibles to each house in the town."

The group returned and disseminated 500 Kurdish-language Bibles, and they petitioned God for and disclosed Christ to all who got them, he said.

"We ask and trust that all the devotees of this religion will go to Christ soon," he said. "It would be ideal if you Pray."

The Islamic State jihadi gathering held onto the northern city of Mosul – Iraq's biggest Christian city – just as Tikrit, Fallujah and Ramadi in 2014, dislodging thousands. While an alliance of powers that incorporated the Iraqi armed force, Shiite minute men, Sunni tribesmen and sponsored by a U.S.- drove alliance have figured out how to reclaim a great part of the nation, many remain uprooted. Today, ISIS controls under seven percent of Iraq, down from the 40 percent it held three years back.

"Daesh (another name for ISIS) controlled 40 percent of Iraqi land," Brigadier General Yahya Rasool, representative of the Joint Operations Command that deals with the crusade against ISIS, told columnists on Tuesday, the Mail Online detailed. "As of March 31, they just held 6.8 percent of Iraqi region."

CAM takes note of that services situated in Iraq are in perfect situation to give help to those uprooted by the continuous fight against the Islamic State, as they can "buy nearby things modestly, realize secure approaches to convey them and are comfortable enough with neighborhood societies to present the Bible and gospel alongside alleviation things." However, they frantically need financing.

"Regardless of the area despite everything being in a condition of war, enormous gatherings of uprooted occupants are taking a chance with their lives attempting to get back," the service executive said. "In spite of the fact that this is risky, because of living conditions in the camps, the absence of assets and the chilly climate, many are as yet trying. We offered some compassionate help to the uprooted that were in the camps, in the streets and in little towns situated between the urban areas of Erbil, Dohuk and Mosul, however the need was a lot more prominent than our assets."

Content created and supplied by: Dhavey (via Opera News )