How a Teenage Muslim Boy is Worships as Monkey-god in India.

By Evangjacob (self media writer) | 1 year ago 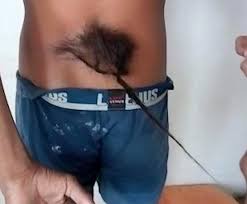 Few days ago, I came across a brief video clip in facebook titled: Born different. I clicked it and what I saw really baffled me. I saw a mere mortal being been worshipped as god. I couldn’t believe my eyes so I tried my best get more information about the video and what the people were really doing and here is what l found. The boy in the video is called Sohail Shah, a teenage Muslim boy age 13, born with a one-and-a-half foot long 'tail' is revered by Hindus in an Indian village who see him as an incarnation of the monkey god Lord Hanuman. Sohail Shah, was born in a small village near Madhya Pradesh, central India with a patch of thick hair on his lower back that has grown long and matted together into a tail.﻿

However, his strange growth has earned him the name-“Bajrangi Bhaijan”- or the God brother by the villagers. He is so popular that people from far off villages flock to him every other day to be blessed .They bring a bag full of fruits such as bananas and mangoes for Sohail in exchange for the blessings. The schoolboy is also revered at school, particularly by teachers who never scold him in fear of upsetting the god. It is unclear why the boy has developed the growth, but it is likely a result of a neural tube deformity.  During the first month of life, an embryo grows a structure called the neural tube that will eventually form the spine and nervous system. Sohail could have been born with a tail due to a neural tube defect known as spina bifida, where the spine doesn't develop properly.

They refer to him as Lord Hanuman, which is a monkey-deity and flock to see him at his home. His parents and grandfather are adamant that the tail has been a source of luck to the family and do not intend on removing it-The teen himself is not even interested in any surgical operation to correct the abnormality. His words: “I do not face any physical problems because of the tail and so I don't intend to get rid of it. I do feel I am special and that I am blessed by Lord Hanuman because I get so much love by the people.” Sohail's family also believe that he is truly God's gift and say they have only experienced love, peace and prosperity since he was born. His grandfather Ashiq Shah, 60, said: “We have been blessed with peace and prosperity since his birth. He has brought good luck to all of us. He is a wonderful boy and is very peaceful and intelligent and caring. He treats everyone with love and respect.” Since Sohail is a Muslim, his grandfather said there were hermits who wanted to adopt him but we refused. They feared is that they may marry him off, instead they decided to raised him with lots of love and care.

According to mythology, Lord Hanuman was the ultimate bachelor and life-long celibate who devoted his life to his lord Rama. Grandfather Mr. Shah said: 'We have accepted Sohail with his tail and we believe that he is a special child.  Even though we are Muslims, we respect the feelings of our Hindu brethren in the village who see him as Hanuman. He has brought harmony in the village. If someone bumps into him in the morning, they say their day is going to be good as they have seen the god's face. They all call him Hanuman and bring food for him. We never object to that. In fact, we also call him hanuman at times.'

His parents, father Sadiq Shah, 32, a daily wage labourer and mother Nazma, 30, also believe that Sohail's tail is God's gift and removing it will bring bad omens. They bring a bag full of fruits such as bananas and mangoes, which are Sohail's  favourites, in exchange for the blessings. His mother said: ‘'I was shocked to see the patch of hair in his back. But soon people in the village started saying he was incarnation of the Hindu god. We too started believing he is special. We are poor but all our worries and sorrows have vanished since his birth. There is always happiness and peace in the family. We never wish to get his tail removed because he was born like this.”

Well, I believed is free world and everyone is free to worship whatever they like. What do think about it? Kindly, comment, liked and share this page to your social media groups.

Content created and supplied by: Evangjacob (via Opera News )