Punctuality as Mark of Christian Maturity

By SamistIlide (self media writer) | 12 days ago

The early believers were first called Christians because of the qualities they possess. It therefore follows that as Christians, certain qualities are supposed to accompany us and guide the way we live our lives. These qualities are also referred to as virtues. These virtues turn out to be the measure of Christian maturity. For example, one who claims to know Christ and does not love his neighbor is not yet mature enough as regard Christian love. Christian maturity becomes a concept for measuring one’s level of conformity to the person of Christ. Among these virtues used to measure maturities in Christ are: charity, patience, faith, punctuality, forgiveness, etc... Certain marks are supposed to be identified in a Christian before such a Christian can be term “a matured Christian.” In this article, I will be stating the facts that make punctuality a veritable mark of Christian maturity. 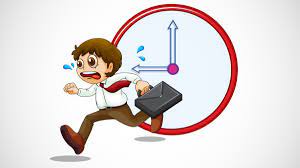 a. The quality or habit of adhering to an appointed time.

b. Strict observance in keeping engagements—promptness.

One might wonder whether punctuality is really all that important. How about for the Christian, is it a sin to be habitually late for one’s appointments? Below are some of the comments of people concerning the value of punctuality.

1. Promptitude is not only a duty, but is also a part of good manners; it is favorable to fortune, reputation, influence, and usefulness; a little attention and energy will form the habit, so as to make it easy and delightful. -- Charles Simmons.

2. I give it as my deliberate and solemn conviction that the individual who is habitually tardy in meeting an appointment, will never be respected or successful in life. -- W. Fisk.

3. Punctuality is the soul of business -- Thomas C. Haliburton.

4. Punctuality is one of the cardinal business virtues: Always insist on it in your subordinates. -- Don Marquis.

5. I owe all my success in life to having been always a quarter of an hour before my time -- Lord Nelson.

6. Punctuality is the politeness of kings -- Louis XVIII.

Some try to justify themselves when they fail in been punctual and they try to rationalize. Even with this, it is vividly clear that not been punctual is not a virtue but the habitual practice of being late due to a lack of concern of being on time. Some will argue that punctuality does nothing to one’s spiritual growth yet I believe it has an adverse effect on the spiritual growth. While some people have great value for punctuality others may have problem with it base on their human experience. To some, the trouble with being punctual is that nobody is there to appreciate it; some it makes them feel that they are appearing too religious and sometimes lonely.

SOME VICES ACCOMPANYING THE LACK OF PUNCTUALITY

A. MISTREATMENT OF OTHERS

1. Lack of punctuality is a theft of someone else’s time, especially as an employee who is late for work, but even as friends (or brethren), where we have agreed to meet at a set time. If I have made an appointment with you, I owe you punctuality, if I throw away my time, I have no right to throw away your time.

2. Unfaithfulness in the keeping of an appointment is an act of clear dishonesty. You may as well borrow a person’s money as his time’’ - Horace Mann. Lack of punctuality is a lack of respect for others says St. Paul: our brethren whom we are to honor – Rom. 12:10; Php. 2:3. This is true because most would be unlikely to be late for an appointment with someone whom they want to honor (e.g, the President, or a Boss at work) and if we honor others better than ourselves, we will make it a point to be on time when meeting with them.

3. Lack of punctuality is a violation of the Golden Rule. We are to treat others as we would want to be treated - Mt 7:12. Are you not bothered when others are late in meeting you? Suppose you were teaching a class and half the class was consistently late? How would that make you feel about your efforts and not only during class, but the time spent in preparation? 4. Lack of punctuality is a violation of the Greatest Commandment. We are to love God with all our heart, soul, mind and strength - Mk 12:30. When we are late for these meetings to worship God or to learn of God, it may be indicative God is not really as important as whatever causes us to be late, be it our bodily rest, our meals, our recreation, our chores, etc. We are, of course, not saying that all lateness for the appointed means would fall into this sin. But if we are habitually late for the means, we must really examine our attitude towards the Lord. One who is generally on time for other appointments but is usually late for worship or prayer is probably experiencing severe backsliding. One who is generally late for all appointments is probably also suffering some form of tardiness in the soul. No one who genuinely loves Christ can be late for an appointment with Him without feeling shame and embarrassment. B. MISSED OPPORTUNITIES1. What others have said in this regard

a. Tardiness often robs us opportunity, and the dispatch of our forces. -- Niccolo Machiavelli.

b. The best-laid plans, the most important affairs, the fortunes of individuals, the weal of nations, honor, life itself, are daily sacrificed because somebody is behind time. There are men who always fail in whatever they undertake simply because they are behind time. There are others who put off reformation year by year, till death seizes them; and they perish unrepentant, because forever behind time. Five minutes in a crisis is worth years. It is but a little period, yet it has often saved a fortune or redeemed a people. If there is one virtue that should be cultivated more than another by him who would succeed in life, it is punctuality; if there is one error that should be avoided, it is being behind time.’’ -- Freeman Hunt.2. Think of the missed opportunities when we are late to services of the church; the opportunity to hear some point, some truth that was presented prior to arriving late.

PUNCTUALITY AS A VERITABLE MARK OF CHRISTIAN MATURITY

It should be noted that I am stressing on this heading, not because I see myself as the perfect example of a Christian leader or of maturity, but because this is one of the most lacking elements in the church today, and because the qualities of spiritual maturity are so determinative to the life of the church and society as a whole. Outside on demand this write-up is developed because I recognized the need of this quality in my own life and ministry as one in a position of leadership as a pastor or teaching elder and leader of men; more so as a person. However, as I consider this mark of Christian maturity, I am confronted with the reality that this is a quality that should be found in my life and the life of every believer—man or woman.

A. The Impact on Our Visitors

1. Who often arrive early- It being their first time, they often allow more time to find the location. It being an opportunity for us to welcome them and briefly visit with them.

2. What must they think when there are no teachers to welcome their children, or when classes or services start and half the congregation is absent?

B. The Impact on Ourselves

1. It will make us better persons I have always been a quarter of an hour before my time, and it has made a man of me---- Lord Nelson

HOW TO BE PUNCTUAL

Plan to be early, and start out early. Plan to arrive 15 minutes before services, appointment or lecture begins. Pray for the grace to always be punctual to appointments.

Content created and supplied by: SamistIlide (via Opera News )