Who Was the Queen of Heaven That Prophet Jeremiah Spoke Against?

By Adexterous (self media writer) | 1 year ago

During the time of the captivity of the people of Jerusalem, around 700BC, when everyone, including the prophet Jeremiah himself, had been exiled to the land of Babylon, the word of the Lord was always coming to Jeremiah concerning the future of the people of God. It was at Mizpah, a city in Eqypt, where they had further been taken that Jeremiah brought forth the message where he mentioned the Queen of Heaven.

The LORD had warned them not escape to the land of Egypt from the authority of Nebuchadnezzar in whose kingdom they had been deployed through God's providential hand. Thus, he warned them by saying: This is what the LORD of Hosts, the God of Israel , says, : As for you and your wives, you women have spoken with your mouths, and you men fulfilled it by your deeds, saying: we will keep our vows we have made to burn incense to the queen of heaven and to pour out drink offerings for her. Go ahead, confirm your vows! Pay your vows!(Jeremiah 44:25).

Who, Then, Was This Queen of Heaven?

The queen of heaven was not Mary the mother of Jesus as some have claimed, with an allusion to Revelation 12:1-3. No, that was a different message entirely. The queen of heaven was rather a title given to a number of ancient sky goddesses worshipped throughout the ancient Mediterranean and among those of the East. Goddesses known to have been referred to by the title include Inanna, Anat, Astarte and probably Ashera, one of the most common idols that the Jews were often drawn to worship. So, for the sake of this discussion, we'll discuss two out these, since one of them is often mentioned in the Bible.

Hera and Juno, in the periods between the Romans and the Greeks, bore this title too, just that the forms and content of worship varied. 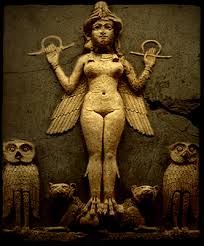 As The Godess Inanna

This is why it was common for the prophets of the Old Testament to warn the people from worshipping the hosts of heaven or the celestial bodies. For Inanna was the Sumerian goddess of love and war, and despite her association with mating and fertility of humans and animals, Inanna was not a mother goddess and is rarely associated with childbirth. Inanna was also associated with rain and storms and with the planet Venus.

Although the title of Queen of Heaven was often applied to many different goddesses throughout antiquity, Inanna is the one to whom the title is given the most number of times. Her cult was deeply embedded in Mesopotamia and among the Canaanites to the west.

As The Godess Astarte

As mentioned earlier, the title applied to various ancients, but specific, godesses. The other goddess, the Queen of Heaven, whose worship Jeremiah had so earnestly stood against may have been possibly Astarte Astarte is the name of a godess as known from Northwestern semitic regions. Another is ‘Ashtart; other names for the goddess in Hebrew is Astoreth. Astarte must been around since 1200 BC.Astarte was connected with fertility, sex and wars. Her symbols were the lion, the horse, the sphinx, the dove and the star within a circle indicating the planet Venus.

It was these godesses that Jeremiah was preventing the people from worshipping because they had been deceived by the corruption and perversions in their days that ha made them worship the creature instead of the Creator.