RCCG Wants Me To Handover, Sign A Document Against My Conscience & Lose My Soul - Pst. Tola Odutola 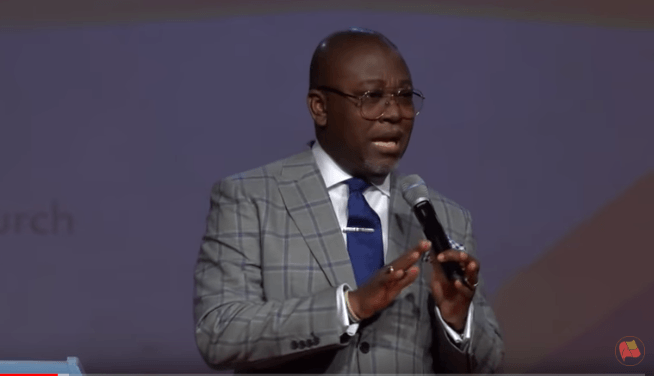 Kindly read the excerpts from the video...

The proposal was to merge all churches in North America together for them to drop down their tax and become "one" under tax identity. Many of us rejected the idea and one of the reasons for the rejection of the idea is the if any churches in any part in America doesn't something wrong

and they want to sue them, they'll sue everybody together.

One of the other thing that was said was that if you want to get a loan for a building or any project,

It has to be central which means everything that we used to enjoy as an entity, we have to go to the Central before it'll be approved.

Either we want to apply for innovation for any of the pastors, or instrumentalist or people that work, it is impossible.

Two or three years ago, there was a proposal which they laid to rest then; the 38 pages "Common purpose agreement" was brought up again and part of what is written in it is that, all the churches should hand over the building assets and not the liabilities.

Why would I handover 10 Million Dollars of assets and 4 Million liabilities would now belong to me ?

Is it my father's business and then, People said No.

Later on, they came up with a 3 page agreement to sign. We showed this agreement to our lawyers and one of the

things the lawyer said was that slavery ended long time ago, because some of the things that are there, it is unbelievable that it is a christian that

draw up this. He said "when he saw the 3 page letter/agreement, he was wondering why/how did 38 pages become 3 pages".

"So, what happens to the rest 35 pages ?", he asked rhetorically.

At that time, trust has been lost, he added.

Because I felt if I sign it,it is out of my conscience and I can't.So, I refused to sign.

Then, a year ago, they wrote us a letter saying if you don't sign you're no longer part of the Redeemed Christian Church of God, I said

And we were given 1 year. we spoke back and forth but nothing happened. So, I knew they were eventually sending us away as a church.

So, in February this year, they wrote us another letter saying since you have signed the document, you're no longer part of RCCG.

In April, I resigned and Baltimore house resigned from the organization, RCCG North America and RCCG world wide.

He said, From today this in fact is our fight Sunday as an independent church not under any organization.

He continued, "I want you to know that this is not a situation that I take likely. I've served in this church for 30 years,

I served for 30 years with not from any organization to say you have done well.

But I know that God is a rewarder. I know that many people out there who probably you're disappointed by my decision, I apologize.

But we're not going back. And I know after this decision, it is more likely that I'll be demonised on social media, It's okay.

The only thing I ask of you, don't bring the report to me. Because I want to focus on the job that God has given unto me, if you want to fight it, fight on your own.

He said "this is the last time I'm going to talk about this, we are going to move with life."

Is anybody hearing me ? he asked.

And I want you to know that my destiny and your destiny is in the hand of God. Reacting to the news,

Churches in America under the Law operate differently than Naija. Each church is autonomous. To tell them all to come together under one central body is actually wrong.