The Last Person This FG Administration Will Fight Is Fr. Mbaka Or They Will End In Shame-Mbaka

By De-yokel (self meida writer) | 5 days

Catholic priest and the spiritual Director, Adoration Ministry, Enugu Nigeria, Very Reverend Father Camellus Ebenezer Ejike Mbaka has during the fathering Sunday's Holy mass homily asked the current federal government of Nigeria's administration not think of fighting him because of his recent statement about the insecurity and the rate of unemployment in the country. He said, the last person this administration will fight is Fr. Mbaka because they will end in shame if they try it.

The highly anointed priest while speaking during the homily stressed that, the allegation of contract denial is a laughable and childish accusation. When they talk about giving Mbaka contracts, I do not want to talk about it because it is a laughable and childish accusation. Whosoever is saying that is a Shame to himself and to the people he is reprsenting. Fr. Mbaka voice come from the spiritual, so what I am saying is unchallengable. I have been silent because I was waiting for them to change until God said speak. He said.

The Enugu based clergy man in his further statements asked the federal government to challenge him with truth if all he said was not the reality. "Some messages are like dew, some are like rain while some are like thunder, so this one is like thunder. Anyone challenging that message is challenging the God of thunder and should be careful. The Fr. Mbaka who is speaking is not just a priest but by the special grace of God a job provider. To the glory of God, those benefitting from me directly are not less than 23,000 people. Those I pay salary including the ones I sponsor in schools both home and abroad. That person challenging Fr. Mbaka, how many people are you feeding? So if I talk you talk? Because the government is paying you? He do not have respect for a priest. Can he talk to an imam like that? He questioned.

He maintained that he was not on the pulpit to defend any allegation but to let the world know that he has never collected any contract or money from the government. "I am not here to defend any allegation, but the three men he mentioned are the people that could have handled the security challenge in the nation. This was during Buhari's first term and these whitemen told them they could conquer insecurity. These men had the platform to end insecurity within one month. This was under Abba Kyari. I just handed them over to government. They only asked me to help them reach government and offered to help insecurity and revive the country's economy, get all the youths employed. Anyone who says the truth is branded terrorist. Are those given the contract better than me? They have shown to the world that they don't give Fr. Mbaka contracts or money. I place my hand on the altar again, I don't have these people's phone number oo. May God bless Shehu for letting the world know. They have shown that they don't have reward mechanism. The last person this administration will fight is this Fr. Mbaka here or they will end in shame. He exhausted. 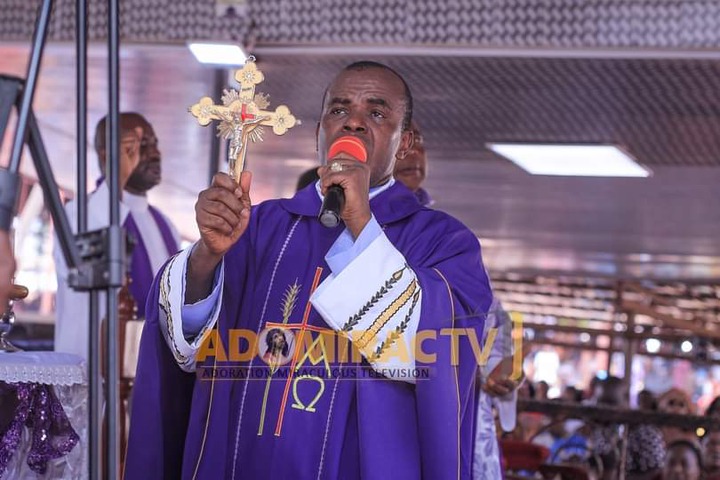 Content created and supplied by: De-yokel (via Opera News )

9 Funny Photos Of Managers Doing Their Player's Style Of Celebration