Paul Apostle said if our believed on Jesus death on cross is false then the edifice of Christianity tumbles ground. Jesus death as been subject to controversy affairs with the Jew, Christian and the Muslims. The Jew's believed Jesus died on the cross make him a false prophet siting bible verse that says "If a man have committed a sin worthy of death and he put to death and thou hang him on a tree is accursed of God" (Deut. 21:22-23) according to them Jesus was false prophet therefore he died on the cross as the accursed od God. The Christian also believe that Jesus was hanged on the cross and died an accursed death says Paul Apostle "Christ hath redeemed us from from the curse of the law being made a curse for us, for it is written, cursed is every one that hanger in tree" (Galatians 3:13) and Quran declared that Christ did not died on the cross, God saved him from the death of crucifixion as he saved his dear one from tribulations. When Pharisees brought serous political charges against Jesus, the governor Pilate was not convinced of his guilt but being influenced by the tumult of the multitude he delivered Jesus to be crucified, they put him on the cross where he remain at the utmost for three or four hours only then was taken down in a swoon and placed him in a sepulchre in garden nearby.

In those days it took several days for criminal to die on the cross, they suffered pangs of hunger, death and thirst and most cases their leg were broken, they died a lingering death extending over several days but it was not so in case of Jesus Christ. Incidentaly he was put on the cross on a Friday afternoon. The following being Sabbath day, a day of religious observance by the Jew and no criminal coil remain on the cross on that Holy day so he was taken down from it after about three or four hours. The loss of blood from. Wound caused him to fall into a swoon and he was taken for a dead man, his body was placed in a spacious sepulchre in a garden by Joseph of Arimethaea, one of his disciple. Jesus being alive in sepulchre left on the third day in disguise met his disciples at Galilee and ate with them. His wound were healed by ointment prepared by Luke.

Reason that Jesus survived the communication is as follow: (Luke 11:29-30 and Mathew 12:39-40). Jesus is said here to five a sign to the people of his own time as Jonah has given to the Ninevites. Now what was the sign given by Jonas to the Ninevites. Bible says (Jonah 17 and 2 :1-2). According to this verse in the Bible, Jonah was swallowed by big fish and remained three days and three night and then came out alive after his prayer was accepted by God so as to Jesus when his people asked him for the sign and Jesus said no sign shall be given to the evil and adulterous generation of his time except that of Jonas. Now the resemblance between two sign of Jonas and Jesus is nothing but going alive in to the belly of fish and the heart of the earth and coming out alive after both were cried by reason of their afflictions and prayed to their Lord for deliverance. Another point is that of Roman governor sympathetic attitude after his wife sees a dream (Mathew 27:29). The governor declared that Jesus was not guilty of the charges brought against him (Luke 23:14) (John 18:38-40)and (John 19:12) from this reference of biblical verses, it is evident that the Governor regards Jesus innocent of all charges brought against him by Jew's when he the governor was threatened to report him to Cesar in Rome he yielded to them and hand over Jesus to them.

Pilate scheme to save Jesus Christ therefore he has pre-planned before his released to the Jew's, he had already had a sepulchre hewn out in a rock garden nearby (John 19:39) it was clever of Pilate to choose Friday afternoon as the time of Jesus crucifixion so that he could not remain on the after sunset the following day being Sabbath holy day to Jew's. All measures were adopted to bring Jesus consciousness otherwise what did Nicodemus mean by bringing the mixture of myrh and aloes. Jesus was shown to have died in official records to pacify the Jews and the Imperial Government of Rome. Joseph Arimethaea boldly asked the Governor to hand over body of Jesus which was granted. If the plan was not pre-planned how could the Governor hand over the body of Jesus to stranger from outside.

Duration of cruxification of Jesus was not long to warrant his death in the cross. Criminals generally took several days to die a lingering death of the cross on the account of the loss of blood from the wounds and the pangs of hunger and thirst. The minimum time of death on the cross ranged between 24 and 28 hours and in some cases it took several days to die on the cross. In such case it became necessary to break the legs of the criminals so that death may be hasten and consummated. Therefore the actual duration of time Jesus remained on the cross was not more than three or four hours. Jesus who was in his prime of 33 years and enjoy excellent health, could not be expected to have died within sort time in particular when his leg were not broken as was done to two robbers crucified with him the same day. It may not be out of place here to note that according to the Roman calendar the day began with the setting of the sun and ended with its setting the next day. According to John 19:14 it was about the sixth hour of the day (Friday) that Pilate spike to the jews. (Mathew 15:33-34). This show that Jesus retained his consciousness up to the ninth hour of the day and fell into a swoon in which the New Testament called giving up the ghost. Do we not read Bible "for he that is hanged and died is accursed of God" (Deut 21:23).

Coming out of blood and water is another prove Jesus survived the gruesome death of cruxification (John 19:23-24)

No eye witness of cruxification, the three writers of the gospels states that there was a darkness over all the land from sixth to ninth hour and there was earthquake, people generally hasten to go home and they do not enjoy the luxury of blood sight seeing. 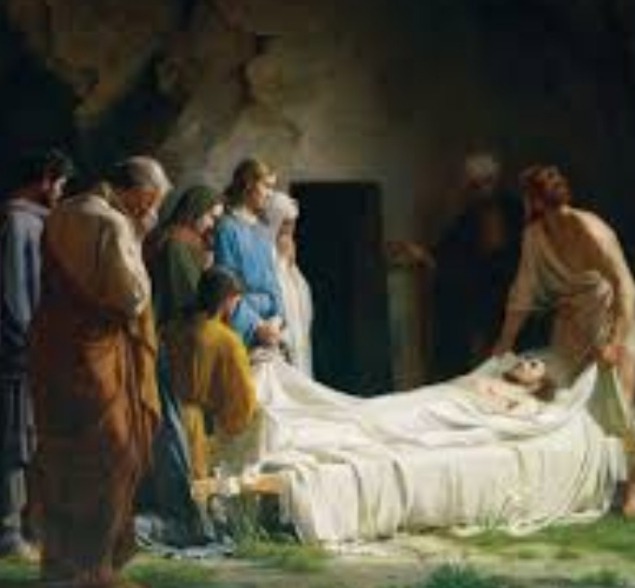 Content created and supplied by: Ade4u2020 (via Opera News )