This Is Why Tithing Should Go To Men Of God Only

By YewandeObiwale (self media writer) | 2 years ago 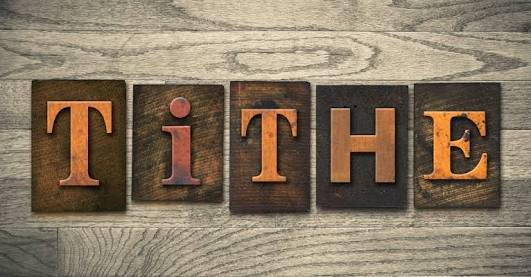 Tithing as remained a controversial topic in Nigeria for a while now and some parts of tithing remains unclear to some while some clearly wants to avoid it because of the mismanagement or misappropriation of funds by the church.

As it is well known by Christians, tithing is the 10 percent of your earnings, but the question remains; to who? because nothing justifies the pastors or men of God to earn tithes from their church members and the pastors are also not forth coming as expected (at least in the eye of followers) to helping the poor and the needy with tithing. As much as that is true, the belief is clearly stated in the Bible which will be the reference point in this article.

Tithing started with Abraham in Genesis 14:20 where Abraham gave king of Salem, Melchizedek because he was the high priest of the Most High, a tithe of all he brought back from war which was counted to him by God unto righteousness and due to the bloodline of Abraham, the Israelites continued in this covenant.

It came to be that in Numbers 18:24-28, " After God instructed that Israel be divided into twelve tribes and one of the twelve were the Levites whom God separated to be the linage where priests and high priests are produced and they are not to be allocated any land unlike the remaining 11 tribes because they are the priest of the Most High, but it was stated clearly that the Tithe is their inheritance and the Levites in this present age are the men of God. Hebrew 7:5 concurs with this as well, showing the agreement of the old and new testament with tithing going to the priesthood.

They also have their instructions which is that they take 10 percent of the tithe to into the temple to the high priest who shares it amongst the poor, needy and the widows. But the first point of tithe is to the Levites.

Hence, the expectation remains that tithing is a spiritual covenant with God as a Christian to which is accounted unto them as righteousness to the Most High God. The controversial part remains the laundering of the tithe by men of God and how the poor are not benefitting from the tithe, but it is important not to judge spiritual matters with physical logic because foundations of teachings vary per beliefs and faith.

Followers of Christ's are to follow their God given instructions to pay tithe to their pastors and the instruction of the pastors is to give part of their inheritance which is the tithe to the high priest which is later shared to the poor. We all have a part to play and the blessings are not intertwined, they are personal to those who abide by the law of tithing.

Content created and supplied by: YewandeObiwale (via Opera News )