Ever heard of the catholic priest who sold his soul to the devil:here is the story.

Grandier's contract with the devil does exist.He was a French Catholic priest who was born in the year 1509.He was known for being sexually promiscuous with some nuns.He also was an outspoken critic on celibacy of the Catholic church. 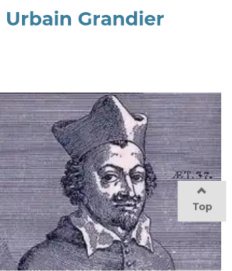 Several of Grandier’s bedmate accused the priest witchcraft claiming he summoned dark magic to lead them to temptation.There was a trial which commenced but it resulted in acquittal.

The chief of France cardinal Richelieu was no fan of grandier.Grandier had published many criticisms about him so Richelieu orders a second trial,grandie'r was arrested and put into trial.He was also tortured during the interrogation.The damning evidence was found in a document allegedly found in grandier's belongings.It was a document written in Latin and covered in strange symbols which had grandier's signature and the signature of several other demons including Satan him self.The bond promised grandier's the love if women, the respect of monarchs,flower of virgin,lusts,honors and powers in exchange for the priests alligiance,although its unclear whether he was forced to sign the document under duress or if it was forged by those seeking his demise.Grandiers was found guilty of making a deal with Satan and was sentenced to death and burnt at a stake in 1634.

Moral lesson.Always walk in the way of God, what shall it profit a man to gain the world and loose his soul at the end.

Don't forget to follow,like and share for a better experience.