EKAETTE COLUMBA: A Golden Mother To The Motherless, Friend Of The Widows In Distress

By Edyking (self media writer) | 1 year ago

"Religion that God our Father accepts as pure and faultless is this: to look after orphans and widows in their distress and to keep oneself from being polluted by the world.”

Mrs Ekaette Columba is one woman of faith and the MOTHER TERESA OF IKONO, owing to her numerous strides in engaging the women, giving to the poor and caring for the sick in the area. Like Nun and missionary Mother Teresa, known in the Catholic Church as Saint Teresa of Calcutta -devoted her life to caring for the sick and poor. Born in Macedonia to parents of Albanian-descent and having taught in India for 17 years, Mother Teresa had a call to serve lives. 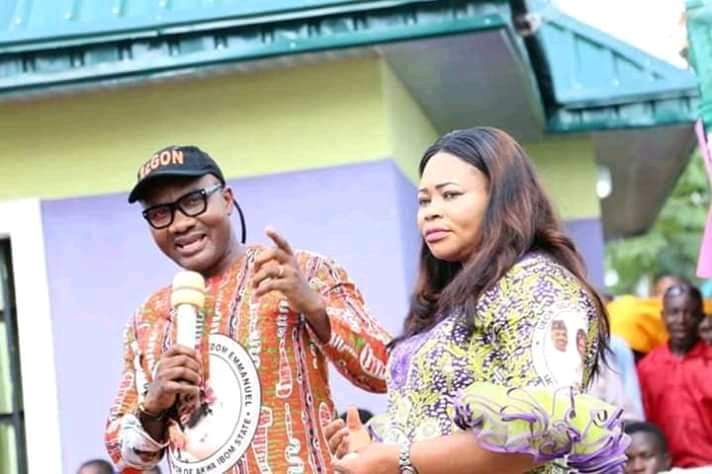 Just like the missionary believed that we must love and care for everyone, especially those who are hardest to love, Mrs Columba tries to see the Lord’s face in everyone she serves. She sternly believes doing any kindness with love was fulfilling God’s ordinance for creating her fellow humans.

The Ikono First Lady magnanimously forms a philosophy, that her actions truly must, as a matter of professing godliness, define God’s love and speak hope into one another --no matter how big or small. Madam's greatest desire, is to serve God through giving alms just as God's missionaries would spread the gospel using the Holy Book. In my countless experiences with Madam, nothing can prevent her from fulfilling this dream of meeting people in those trying times. This woman has seasonally allowed God to use her as an instrument of Jesus' mighty love, compassion and grace upon humanity.

These virtuous moves by the council boss's wife at "putting Ikono women FIRST" plus the general show of love and empathy to her constituents must have informed her husband's record-breaking milestones as the best Council Chairman in history; and has given more credence to the unity, togetherness and peaceful coexistence witnessed in the land.

Mrs Columba has embarked on a number of projects for women emancipation, leading to uplift of many businesses and homes in the area. She has steadily extended business grants and largesse to raise people in trying times. I will like to beam a few of several others as much as I can remember.

On the widow's house, the Governor's wife specially appreciated the Chairman's wife for keying into her 'shelter of hope,' scheme and stated, that she was impressed by the level of work done by Mrs Columba. Speaking during Her Excellency's working visit to Ikono for the inauguration of projects, the State's First Lady asserted, "Others would have called me or sent text message inviting me to fix the house but the Chairman and the Wife elected to sacrifice and provide this decent accommodation for the woman. I thank you both and I pray that others emulate this kind gesture", she said.

Prior to that, Mrs Columba had earlier narrated the ordeal of the poor widow and what moved her to initiate the project. In her statement, "My attention was drawn to the terrible state of the woman's house and when I visited, the shanty she was living in had fallen on her. I was moved to tears and when I went back, I entered into a covenant with God that I was going to provide a decent accommodation for her. I wish to openly acknowledge the magnanimous support of my husband in this project and I openly pray God to bless and reward him for his show of love which made this project a reality".

Additionally, Madam has also passed a strong message against indiscriminate rape cases to members of the public and advised victims of such act in the area to report perpetrators of the earth-shaking heinous crime to Government enforcement agencies. Mrs Columba, joined by reputed women of Ikono, dropped the hint in line with Governor's wife resolve to stem out such act, as women lent voices together against indecent behaviours and admonished parents to teach their wards on the right value to life.

Again, Ikono First Lady celebrated husband's birthday with the physically challenged under the aegis of Joint Association of Persons With Disabilities, Ikono chapter where she donated wheelchairs, cash, wrappers to them. During the event, she described people living with disabilities and other physically challenged natives of the area as awesome people whose present status in life God cherishes, just like everyone else in the land.

The beautiful wife of Ikono Council helmsman expressed excitement to host the physically challenged persons at her behest and charged the affected constituents to see themselves as important people embedded with enomous potentialities to make life meaningful inorder to fulfill their purpose on earth.

"I'm elated to mark my husband's day with you, because it has always been my desire to do this; I will like to say that no matter your conditions at the moment, always believe that you equally belong to the society, because I cherish you so much and I hold you in very high esteem. Let me specially appreciate the good works which the Wife of the Governor, Her Excellency, Dr (Mrs) Martha Udom Emmanuel, started. It is that same motherly path that I tread. She has been a model of hope to the less-priviledged and my job is to continue in that good work. My husband, the Chairman of Ikono loves you and I appreciate his support for me to do this since I couldn't do this without him", Mrs Columba stated.

Also, Eka Esit Mbom of Ikono has steadily rode on the crest of massive women emancipation and engagement, where the Chairman's wife sometime ago, played host to women from the 10 Local Government Areas of Ikot Ekpene Senatorial District, numbering over 1,000 who converged on the Council hall, Ibiaku Ntok Okpo to strategize on how to sustain the ongoing good governance in the State by voting to return Mr Udom Emmanuel as Governor in 2019. At the occasion, no less than 10 indigent women were empowered with some life-enhancing packages.

There has been regular interface with women from time to time, the meeting with Councilors/Supervisors' wives on the need to remain women of excellent virtues cannot be forgotten in a haste, among others. And by the time her husband's tenure winds down next week, the people of Ikono Local Government Area would be thanking their God who had brought such an altruistic mother their way.

No wonder the good women of Ikono LG will continue to laud the Chairman's beautiful wife for changing the paradigms of leadership and for effectively utilising the resources made available to her, thereby impacting the lives of the women in no small measure. Thank you so very much for always responding to the call of every Ikono girl child, with this attribute, the land will forever remain PDP dominated.

Who can find a virtuous woman? For her price is far above rubies; absolutely like her role model, the Governor's wife, Dr(Mrs) Martha Udom Emmanuel, Mrs Columba has affirmatively kept her promise of "bringing light" and showing examplary leadership qualities to the cradle of Ibibio Nation -the land known and revered as the food basket of Akwa Ibom State.

TO GOD BE THE GLORY!

Excerpts from the Daring milestones of Ikono First Lady, Mrs Ekaette Columba to women, while in office as the First Lady of Ikono Local Government Area.

Content created and supplied by: Edyking (via Opera News )