Cultism is idolatry in disguise

These cult activities, norms, believes, objectives can be traced down to ancient parctises of idolatry, when men believed they were blessed by the hands of the gods for violence and so charge at every act of violence. Some of these believes is well traced to ancient greek, roman and Norse mythology, a good example is Odin, he was believed to be a Norse god of war and of the dead, according to Norse mythology, ruled over valhalla (the hall of the slain). In line with this believe, dying in battle was the most prestigious way to depart from life, it was also believed that the vikings who were Odin worshipers were very brutal scavenger who were war inclined. According to ancient mythology, their believes were anchored on " Forgiveness is a sin, the enemy you refuse to kill today will kill you tomorrow" these ideas were gotten from their god who was believed to be a god of war. Some will think this article to be one sided but in the clear fact, all other cult groups have their own godlike figure from which they are governed by, and the Norse mythology is history oriented.

These believes promotes the worship of the godlike figure that governs the groups, all the set laws, dos and don't only depict the idea of a set belief. A religion is the belief, customs and way of life of a group of people. Different cult groups battling over supremacy goes beyond the normal rivalry but in the actual sense the battle is over the supremacy of beliefs, or should i say religion. Most times some of these cult members do not know in the actual sense the essence of the group, what it stand for, the spiritual benefits of these acts, nor do they imagine why many cult members die for the values and beliefs of the factions the belong to but note this 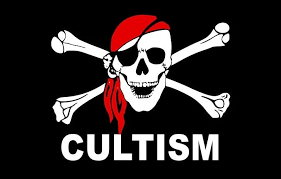 dedication is a key factor in religion. Do not be deceived cultist is Idolatry in disguise.