7 Bible and Quran that say exact the same thing

By BenjaminOgobuchi5050 (self media writer) | 2 years ago

7 Bible and Quran that say exact the same thing 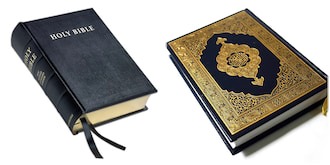 For Christians, the Holy Bible is the word and the law, which they adhere strictly to in all aspects of their lives. For the Muslims, the Quran is the word of Allah which they follow closely.

Most people think that this religions can be in harmony, while others feel they should be at loggerheads. What do you think? Before you answer, here are some verses from both books that say the exact same thing on various subjects:

While speaking on the matter of Zechariah and his son John the Baptist, here is what the Quran says:

Quran 3:39: Then the angels called him, while he was standing in prayer in Al-Mihrab (a praying place or a private room), : “Allah gives you glad tidings of Yahya (John)."

And the Bible says:

Luke 1:11-13: Then an angel of the Lord appeared to him, standing at the right side of the altar of incense.… The angel said to him: “Do not be afraid, Zechariah; your prayer has been heard. Your wife Elizabeth will bear you a son, and you are to give him the name John.

On how angels feel about humans and their sins, the Quran had this to say:

Quran 42:5: …The angels exalt [God] with praise of their Lord and ask forgiveness for those on earth…

While the Bible says:

Luke 15:10: …The angels of God rejoice over one sinner who repents.

3. The seed and the growth

Do you know what causes seed to grow from the ground and bring forth fruit? The Quran says this:

Quran (63:64): Then tell Me about the seed that you sow in the ground. Is it you that make it grow, or are We the Grower?

1 Corinthians 3:7: So neither he who plants nor he who waters is anything, but only God, who makes things grow.

Swearing an oath using God's name is obviously frowned upon as we see in these verses. The Quran says:

Quran 2:224: Do not use God's name in your oaths as an excuse to prevent you from dealing justly.

In the book of Exodus, the Bible says:

Exodus 20:7: Thou shalt not take the name of the LORD thy God in vain; for the LORD will not hold him guiltless that taketh his name in vain.

Wondering how parents should be treated? Here is what the Quran has to say:

Quran 17:23-24: You shall be kind to your parents. If one or both of them live to their old age in your lifetime, you shall not say to them any word of contempt nor repel them, and you shall address them in kind words. You shall lower to them the wing of humility and pray: "O Lord! Bestow on them Your blessings just as they cherished me when I was a little child."

The Bible summarizes it in two lines, saying:

Exodus 20:12: Honour thy father and thy mother: that thy days may be long upon the land which the LORD thy God giveth thee.

The Bible in Revelation has this to say about praise of God:

Revelation 4: 11: “You are worthy, our Lord and God, to receive glory and honor and power, for You created all things; by Your will they exist, and came to be.”

The Quran has this to say about the praise of Allah:

Quran 2:255: “Allah! None has the right to be worshiped but He, The Ever Living, the One Who sustains and protects all that exists. Neither slumber nor sleep overtakes Him. To Him belongs whatever is in the heavens and whatever is on the earth.…”

Speaking on the matter of guardian angels, the Quran had this to say:

Quran 6:61: “…and He sends guardians (angels guarding and writing all of one’s good and bad deeds) over you, until when death approaches one of you, Our Messengers (angel of death and his assistants) take his soul, and they never neglect their duty.”

The Bible book of Exodus had this to say about angels:

Exodus 23:20: “I am sending an angel ahead of you to guard you along the way and to bring you to the place I have prepared.”

Content created and supplied by: BenjaminOgobuchi5050 (via Opera News )