Christ described him in superlative language when he announced that “truly I say to you, among them that are born of women there is not one risen a greater than John the Baptist “Mathew 11:11. He was also well respected by the leaders. In fact, the Bible recorded that “for Herod feared John, knowing that he was a just man” Mark 6:20. That was John’s reputation across the region at that time.

John the Baptist carried on his vocation with dignified humility and respectability and the people and the leaders adored him. However, his respectability was punctured when he veered off his ecclesiastical vocation and ventured into secular matters or what can be descried today as politics. He got it wrong.

The Bible recorded that “for John said to Herod, it is not lawful for you to have her” Mark 6: 18. The authorities did not find it reasonable for a man with such important historical mission of preparing the people for the coming of the savour to be judgemental and dabbling into the political affairs of the state. Herod was angered by his audacity and committed him to prison because he feared God until he had to sacrifice him for higher national cause. John’s mission ended in disgrace.

The question arising from this story line is instructive. Did John the Baptist accomplish his mission? Would he have died a disgraceful death if he had focused on his vocation or calling?

To answer the first question, the Bible recorded Herodias daughter “came straightway with haste to the King, and asked saying, I will that you give me by and by in a charger the head of the of John the Baptist “Mark 6:25. “And immediately the King sent an executioner, and commanded his head to be brought: and he went and beheaded him in prison” Mark 6:27. John the Baptist life was terminated abruptly, so he couldn’t have fulfilled his calling before his gruesome death. So as a forerunner he failed to prepare the way for the coming of the saviour.

To answer the second question, John the Baptist would not have died if he had focused on his vocation because the bible recorded that “Herod feared John, knowing that he was a just and an holy, and observed him, and when he heard him, he did many things(miracles), and heard him gladly” Mark 6: 20. How did a man hitherto respected by a powerful ruler , suddenly was thrown into prison like a common buffoon? It happened because he lost focus and ventured into politics and he paid dearly for it.

I have taken this pains to narrate the circumstances of the ministry and death of John the Baptist, to illustrate the present ordeals of Rev. Fr. Ejike Mbaka, a hitherto respected man of God, who suddenly began to be immersed in wild Nigerian politics and still deluded himself that he would not have his hands burnt.

To a rational person, the hitherto respected priest may have lost focus. He was basking in illusive grandeur of self-righteousness and self-importance or infallibility that he went beyond the frontiers of self-restraint. Fr. Mbaka prior to the 2015 and 2019 general elections hosted many politicians who came to seek spiritual support and he had a good word for everybody. 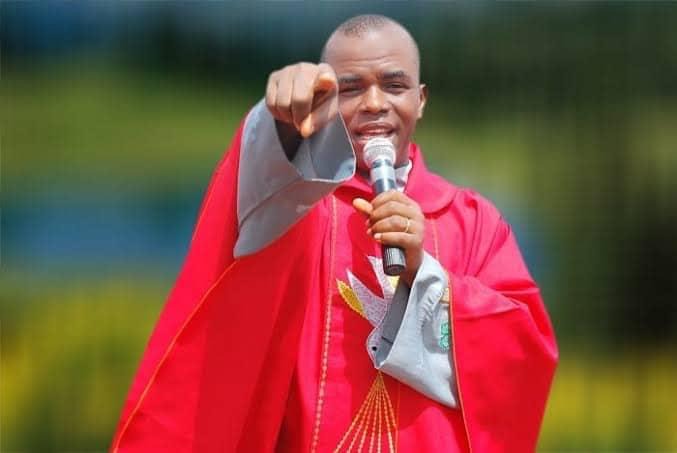 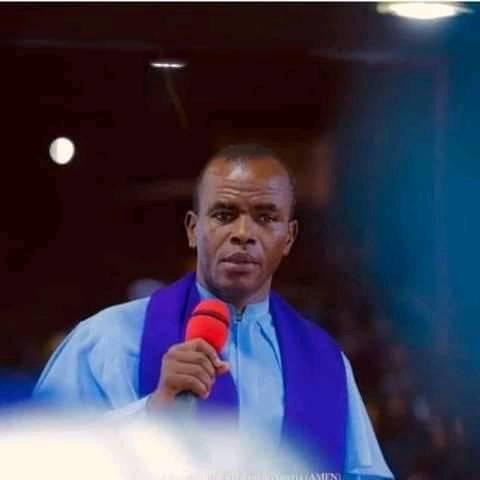 When Atiku and Peter Obi visited him, he had cheering news for them. Not long after, the APC politicians came calling, he told them what they wanted to hear. The cacophonous and conflictual messages could not have been flowing from one source- the Holy Spirit.

Nigerians began to doubt him. The hitherto respected man of God was brought to public odium and people began to question his source. And true to the holy book, it admonished us to “believe not every spirit, but try the spirits whether they are of God because many false prophets are gone out into the world” 1 John 4:1 and Jeremiah 14: 14 foresaw this travesty and lamented that “ the prophets are prophesying lies in my name.

Going by the recent development, one is constrained to begin to place Fr. Mbaka’s pre-election and post-election political prophesies into perspective. Notably the red carpet visit of the reverend gentleman to the seat of power and the Presidential handshake that accompanied it. 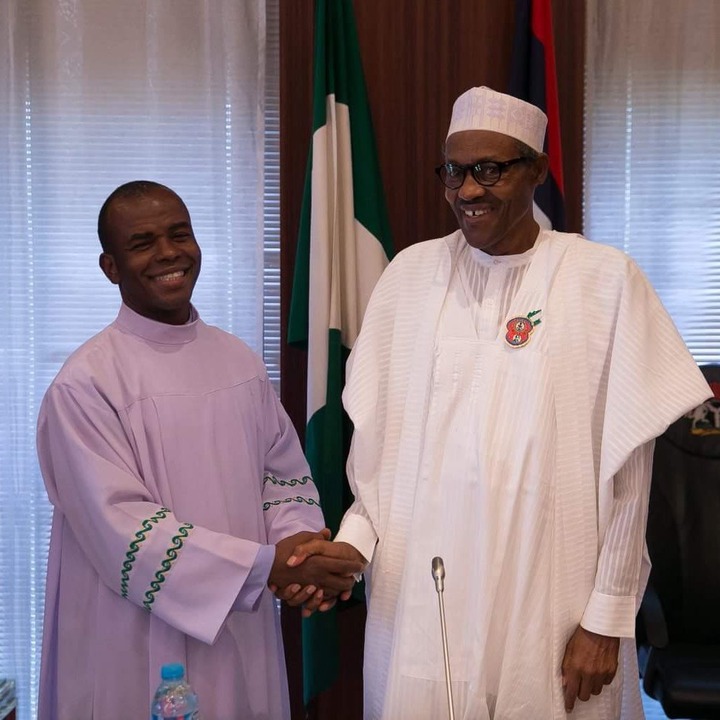 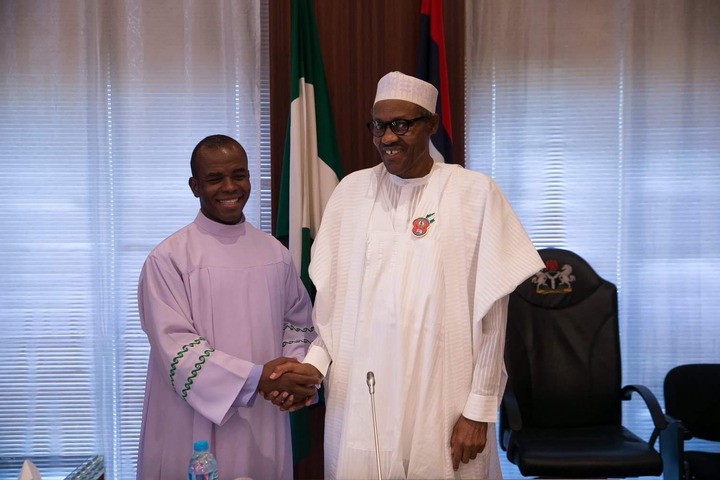 Again his rantings and of course the hullaballoo that accompanied his transfer to another parish in 2017 is worrisome and indecent. An otherwise standard administrative practice of the age long church was roundly condemned by the ruling party which confirms a rather odious and incestuous relationship between the “prophesies” and crude Nigerian politics.

The divinity of Fr. Mbaka’s prophesies is again called into question when after the Presidential handshake our man of God went into a “trance” and began to see calamitous visions for Mr. President, a vision roundly condemned by Nigerians as being capable of plunging the fragile nation into monumental crisis.

His activities have brought odium to the revered Holy Catholic Church and presented the church as being compromising or too weak to discipline its officials with the sacred duty of ministering to the flock. 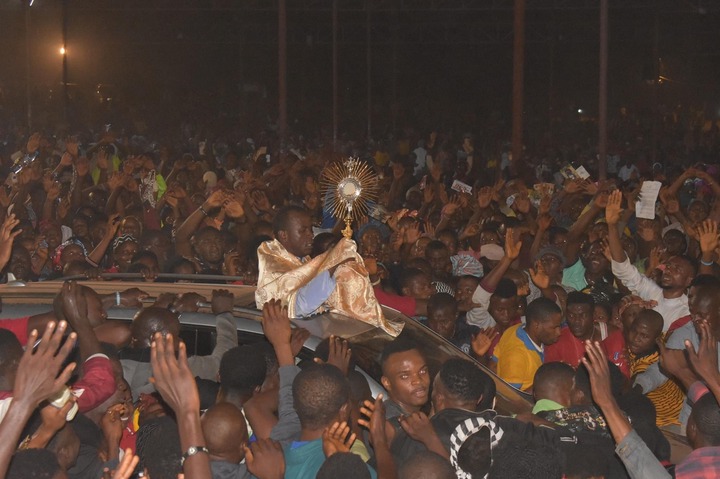 It is good to note that irrespective of the reason for his transfer, whether it is for routine administrative posting or as a disciplinary measure, the action of the Enugu Archdiocese of the Catholic Church is in the right direction.

The government in power should be disciplined enough to draw boundaries between the church and the state and avoid dabbling into the matters of the Holy Catholic Church. Let what is holy remain and what is profane remain as it were.

The question in everyone’s lips still remain; ‘Does God really speak through him?

Today's Headlines: "I Believe In One Nigeria" -Akeredolu, US Reject Buhari's Request On AFRICOM

El-Rufai Plotted Evil Against Rivers, Today He Is Reaping From The Evil He Plotted Against Us- Wike