Are Our Pastors Deceiving Us With Tithing?

By Bengmedia (self media writer) | 2 years ago

Tithing is one of the controversial issues in the religious domain, especially in Nigeria. Many have suggested that it is one of the obligations of any Christian faithful while countless others are of the opinion that it is a way our Christian religious leaders use in acquiring money deceitfully from their members.

Ordinarily, it would sound impossible to give an analysis on issues bordering on tithes and tithing without laying emphasis on the scriptural quotations of the Holy Bible but for the purposes of this article, we shall have a little shift in what was written in the Bible about tithes and tithing and base our analysis on some religious happenings while drawing little inference from the Bible. One thing everyone one should consider is that Christianity is a faith-based religion which doesn’t compel force in all its dealings. Christ during his time never force anyone to follow his teachings rather he performed miracles and preached the word of God to people thereby convincing them that he is the way, the truth and life. Secondly, Christianity made us understand that God created man and the world and anything in it. Thirdly, Christianity made us understand that God enjoys praises and thanksgiving. Looking at all these, it will be erroneous to suggest that the issues of tithes and tithing came from God. God is the owner and creator of the universe, what else do you think you could give him that will be greater than that which he already owns. Just like any organisation, payment of tithe is an initiative of man in finding a way to generate money so as to offset the little expenses which the church are generating while running their affairs. The Bible specifically laid so much emphasis on tax collection rather than tithe collection. It is just a misconception of a way of thanking God for his blessing when Abram gave a tenth of his wealth to Melchizedek when he defeated the armies of the four kings and rescuing his nephew Lot. Now the big question is, is this the case today?

In our churches today, tithes are seen as an obligation which all members are mandated to pay. In the Nigerian context, it is on a whole new level. Recently, one of the leading pastors in Nigeria made a public opinion on his Twitter page concerning tithe and tithing. He said, “tithing is an inescapable covenant obligation. Prosperity not just wealth is impossible without tithing because when you’re not paying your tithe, you’re under a financial curse”. 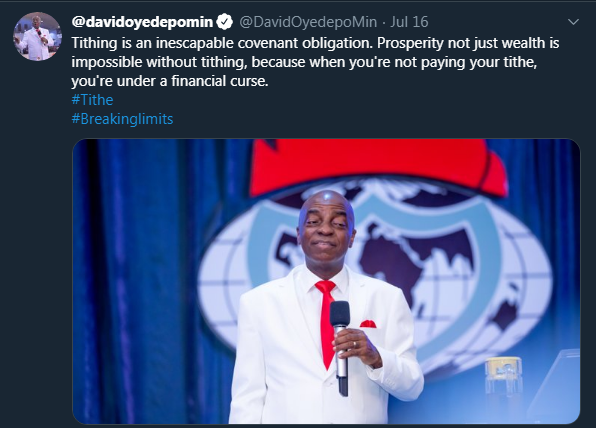 Looking at his statement critically, you’ll see that it attaches for and accorded punishment to anyone who fails to do so. The first question I would want to ask are these: Have Christianity which forms the bases of his teachings changed from a persuasive religion to a compelling religion? What will happen to a man who collects the so-called tithe but use it for his personal gains and not for the welfare of the church? What happened to people who don’t even believe in God yet they are wealthy and prosperous?

Payment of tithe, offering and whatever name it may be called if it is for the betterment of the church and the society, I don’t think it is a bad idea but what I perceive to be bad in it is the forceful manner which members of a church are compelled to pay it. With this so much pressure in tithe payment, what then is the difference between tax payment and tithe payment?

Another issue why people are refusing gradually to pay any form of contribution with tithe inclusive is that some churches no longer serve its purpose rather it has become a business venture where personal gains and profit maximization have taken the day.

The high time some Christian religious leaders began to relinquish their deceitful attitude towards tithe and tithing and uphold that which is for the betterment of humanity and the church, the laity will continue to move out in any church related activities.

Content created and supplied by: Bengmedia (via Opera News )