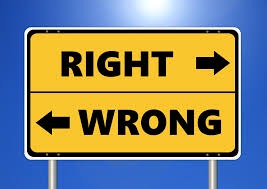 Some hundred years back, the Catholic Church which was the principal symbol of knowledge and faith, taught it adherents that the earth was flat. People like Galileo who opposed such teachings were described as heretics and castigated by the Church.

Years later, faced with fact and better information, the church confirmed that the earth was indeed round.

During the 60's, a research was allegedly carried out by some Psychologists who described homosexuality as a mental disorder.

During the early 2000's, ladies who put on men attire were seen as possessing "ashawo vibes", while people who had television sets in their houses were told that they had a special place in hell.

The above anecdotes paints the picture of how morality and its yardsticks are an ever evolving concept.

The things that were once abhorred, end up becoming a norm, not necessarily because it is right, but because when faced with fact, we realize that we have to tweak our morality yardstick to suit that scenario.

This then shows that as individuals, while it is advisable to have set standards, we must make room for modernization of those standards because with time comes a need to tweak it to accommodate current realities.

Holding on strongly to opinions around morals without making room for new realities is itself immoral; while choosing to stay a middle man because we want to respect history is bad in itself.

Dante Alighieri famously said, "the deepest circle in hell is reserved for those who maintain neutrality in times of moral crises."

While it is advisable to advise individuals to make room for new changes in their ideals and morals about life, it is also not fair to condemn those who hold on to history that shaped them; while tagging them as "phobes"

We can't all accept change. Some would gladly accept it, while others would hold on to the past.

Whichever way, the most important thing is to ensure we accept the fact that these changes would always come.