African traditional religions were the main religions in the region. Arab merchants introduced Islam to West Africa around the ninth century through North Africa from the Middle East. 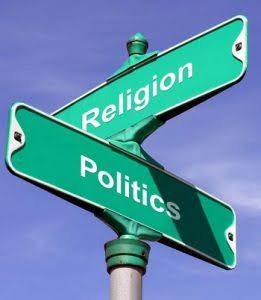 Starting from the fifteenth century, Christianity was introduced as a harbinger of colonialism and as an agent of monotheism, westernization, and education. Therefore, before its political independence, Nigeria had three distinct religions each with a strong influence on people’s daily life.

Nigeria is a multi-ethnic and multi-religious society with about two hundred fifty different ethnic groups. Out of these diverse groups, three of them stand as dominant groups namely: Hausa/Fulani, Yoruba, and the Igbo.

The granting of independence brought forth the issues and challenges of ethnicity, religion, and the question of identities. Hitherto, religion had fueled the north-south dichotomy, heating up Nigerian politics until today.

Religion, mainly Islam and Christianity, is today rooted along societal and ethnic lines. The imperfect distribution of Muslims and Christians is complicated by the ethnic and societal differences which created an opportunity for politicians to play identity games.

Religion can be understood as a regulated pattern of life of people in which experiences, beliefs and knowledge are reflected in man’s conception of himself in relation to others, his social world, the physical as well as the metaphysical world.

Religion is a belief in the existence of a God or gods and a systematic worship of a God or gods. It is a strong element influencing the thinking and daily life of its believers. In simple terms, religion refers to the beliefs and practices based on a conception of the sacred.

On the other hand, Politics can be viewed as the process of making and executing governmental decisions or policies, the authoritative allocation of values; or who gets what, when and how; the quest for power, order, and justice; the art of influencing, manipulating and controlling others; the process of conflict resolution in society, and a struggle among actors pursuing conflicting desire on public issues.

Religion and politics have assumed the center stage of discussion and influenced every state affair and power structure, promoting ethnic and religious conflicts as well as political violence.

The basic question remains: why is there a recurring influence of religion on politics in Nigeria? Why has there been a recurring effect of religion as an instrument of violence and national disunity?

A cursory examination of religion and politics reveals a double contrasting theme that derives its power from different sources. Religion as a source of power is based on spirituality while material forces and spheres are the basis of political power. Hence, religion in Nigeria has been made a resource for conflict and national disunity.

With religion generating so much passion, the polarization of the nation has found full expression as the country is finally pitched as a battleground between Christians and Muslims.

The involvement of the political class, therefore, is more worrisome. The influence of religion on the Nigeria state and the politicization of religion by the state have created an identity for Nigeria politics today.

This influence has made religion lose its spiritual authority in the society and become a tool in the hands of unscrupulous individuals to further their interests. Religion has assumed the role of creating an identity for Nigerian politics which facilitates conflict to militate against the corporate existence and stability of the state.

Today, religion has been transformed into a new fundamental political factor. Religious competition between Christians and Muslims is without doubt the single most significant political issue in the country. Religion has influenced the “federal character principle” and dominated the political debates of various ethnic groups.

The “federal character principle” was originally devised to guarantee the equal representation of Nigerians from all states of the federation in political and bureaucratic government offices.

Inter-religious conflicts in Nigeria form part of the dynamics of identity politics. Political elites in Nigeria have always sought to reap advantages from the multidimensional identities, more so during election periods, and this has resulted in conflicts and instability. This politicization of religious identities during contests for political office often lacks any sustaining unifying ideology.

The politicization of religion has been examined in the sphere of secularism. Religion has assumed the center stage and serves as a basis for identity, mobilization, and legitimization in the state.

Religion has assumed the center stage and serves as a basis for identity, mobilization, and legitimization in the state. Religious civil society and associations started springing up from Islam and Christianity in Nigeria.

To further strengthen the unity and faith of their people and to protect the interest of members in the face of imagined or real marginalization, these religious civil societies should advance the principles on which each of the religions is based by constructively condemning inter-religious conflicts and their perpetrators.

Mahmud Tukur, Leadership and Governance in Nigeria: The Relevance of Values (London: Hodder 1999).