What Every Muslim Should Know About the First Ten Days of Dhul-Hijjah.

By Abuarfan (self media writer) | 1 year ago

According to the Islamic Calendar, Today is the 30th of Dhul-Qaada 1441AH. Tomorrow will be 1st of Dhul-Hijjah, 1441AH. 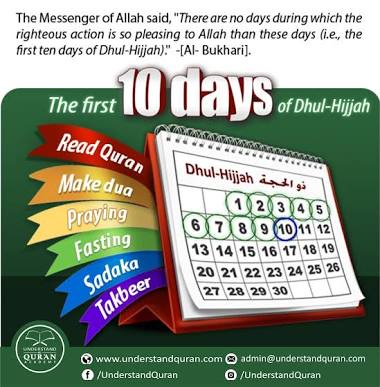 The First Ten Days of this month are very sacred and a time for increased reflection, seeking Allah's forgiveness, doing good and various other forms of worship. They are so sacred that Allah swears an oath by them, saying in the Qur'an: "By the dawn, by the ten nights". [Al-fajr 89:1-2]. Swearing an oath by something implies its importance and great benefits.

What is expected of every good Muslim within these days are as outlined below: Abu Qatadah reported that the Prophet Muhammad(SAW) said: "Fasting the Day of Arafah (9th) will be credited with Allah by forgiving one's sins of the previous year and the following year". [Muslim]

One of the wives of the Prophet (SAW) said: " Allah's Messenger used to fast the (first) nine days of Dhul-Hijjah, the day of Ashura, and three days of each month". [Sahih Sunan Abu Dawud #2129] The Prophet(SAW) encouraged Muslims to recite a lot of verbal remembrance of Allah.

Takbeer (Allahu-Akbar) during these days. Generally, all good deeds are rewarded highly at this blessed time. These actions include praying, reading Qur'an, making Du'a, giving in charity and being good to our families, and other voluntary righteous acts of worship. These are among the deeds that are multiplied in these days. Seeking Allah's forgiveness (Istighfar) and Repentance (Tawbah) at this time is also encouraged. This means more than just a verbal statement of remorse for past misdeeds. It also requires a firm resolution to avoid making the same mistakes in the future by giving up bad habits, and behaviour while sincerely turning back to Allah. The slaughtering of a sacrificial animal (Adhiya) is also legislated for the Day of Sacrifice (10th) and the Days of Tashriq (11th, 12th, and 13th)

The 10th of Dhul-Hijjah is Eid-ul-Adha or the Day of Slaughtering. It marks the conclusion of the major rights of Hajj and commemorates Allah's bounty on Prophet Ibrahim (AS) when He gave him a ram to sacrifice as a ransom for his son.

It is reported that Prophet Muhammad(SAW) sacrificed two horned rams, black and white in colour, and said Takbeer (Allahu Akbar), and placed his foot on their sides (while slaughtering them).[Sahih- Bukhari and Muslim]

Note: For those that are hoping or sure of making a sacrifice they should their hairs and nails today (i.e 30th of Dhul-Qaadah) because after today you are not allowed to cut them until after making the sacrifice.

Finally, we hope that that this month shall be a blessing to bring the end of this Coronavirus Pandemic and make things to come back to normal.

And please don't forget the needy and orphans. Help and put a smile on their faces during these sacred days.

Content created and supplied by: Abuarfan (via Opera News )