What happens when a pope dies

By Michaelmichaels (self meida writer) | 9 days 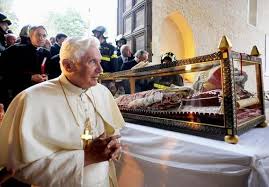 According to experts, the pope's body is likely to be embalmed and then exposed for the veneration of the faithful – most likely in St. Peter's Basilica. Tradition calls for nine days of mourning during which there is a papal interregnum, or interval during which the Catholic Church is without a spiritual leader. Immediately after the pope has passed away, a document known as the Apostolic Constitution drafted by John Paul II himself in 1996 enters into effect. At this point, the pope’s camerlengo (chamberlain) verifies the pontiff’s death by calling him by his Christian name three times. If there is no response, the chamberlain declares “The pope is truly dead.”

The confirmation used to be accompanied by the chamberlain tapping the pope’s forehead three times with a small silver hammer, but the tradition fell into disuse after Pope John XXIII’s death in 1963. The Vatican follows a strict protocol for dealing with the death of a pope. Word is passed through the Church’s civil service – the Curia – and foreign ambassadors and heads of state are informed officially. Vatican Radio then flashes news of his death around the world. In many cities, churches ring their bells to announce the death. 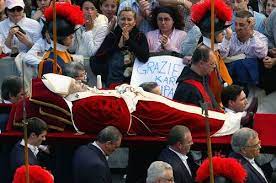 John Paul II’s body was then removed from his apartment, which was then locked and sealed. A small ceremony takes place during which the pope’s Fisherman’s Ring and papal seal are broken. Today it is a symbolic act, but historically it was designed to prevent impersonation and forgery. No images or recordings of any kind are permitted to be taken apart from portraits of the pope after his corpse has been suitably prepared to the satisfaction of the camerlengo, Cardinal Eduardo Martinez Somalo.

Content created and supplied by: Michaelmichaels (via Opera News )

How The EPL Table Looks Like, After Liverpool Won Against Southampton, Chelsea Won Against Man City

Liverpool Could Swoop For Udinese Midfielder

The Most Effective Premier League Managers of The 2020/2021 Season

Premier League team news: How Arsenal could line up against West Brom

Ramos and Varane a doubt? How Real Madrid could line up against Sevilla