Another day in America and yet another attack on Christianity. This time, the Catholic church was their target. 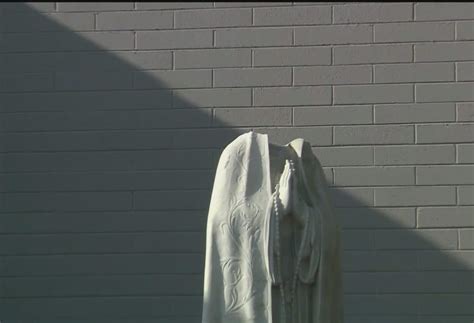 According to reports from Chattanooga in Tennessee, a statue of Virgin Mary at the Saint Stephens Catholic was beheaded by angry mobs.

The reason for the attack on Virgin Mary's statue have not been confirmed but it is becoming a phenomenon in America. Just few days ago, i wrote about an attack on a church while parishioners were worshipping. It was reported that a man crashed his car into the church building and used gasoline to set the place on fire. This was happening while people were trapped in the church. Few days ago, a status of Virgin Mary was also vandalized and sprayed with black paint. This happened in Queens, New York.

It has also been reported that few days ago in Boston, a statue of Virgin Mary was set on fire by protesters.

Let me take you back to where it began.

Last Month, an activist who supports Black lives matter, Shaun King, defined Jesus and Mary as racists and asked that their statues be brought down. According to him, depicting Jesus and Mary as whites is a form of racism and it should be stopped. His views was welcomed by some Black Lives Matter protesters.

I want to ask you my reader, Do you think that depicting Jesus and Mary as whites is a form of racism?

I'm trying to imagine what would be happening right now if these attacks were carried out on mosques.

Different attacks on Churches in one month is a sign of things to come. Christians worldwide should also resolve to peaceful resolution and not use violence.