How Can I Explain These Bible Verses To My Son? Dad Reacts

By D_Kenny (self media writer) | 2 years ago

How can I explain these Bible Verses to my Son? Dad Reacts

The Bible, which is the Holy Book of Christians, has always been confusing to some, even the people of same faith. Some believe that some verses are not translated in same manner in different versions of the Bible. It is widely known that there are various versions of the Christian Scripture, which includes and not limited to King James Version (1611, KJV) revised in 1769, American Standard Version (1901, ASV), Twentieth Century New Testament (1901, TCNT) revised in 1904, The New Testament in Modern Speech (1903, NTMS), The Worrell New Testament (1904) , Thompson Chain Reference Bible (1908), The Scofield Study Bible (1909) revised 1917 etc.

Some claim that there seem some verses that are ambiguous. This is the case of a Nigerian Dad, who revealed why he won’t let his son read some parts of the Bible. He claimed those parts of the Bible are not explainable to a child. 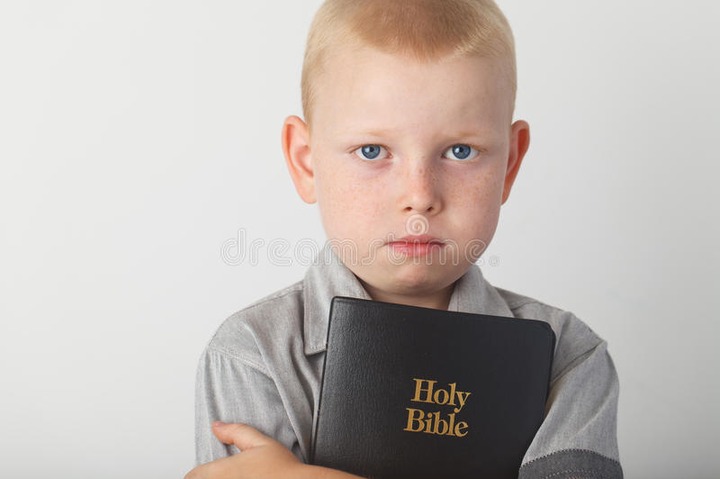 The man identified as Chike Delic Obi took to his Facebook page to list the reasons he won’t allow his child read some parts of the Bible. He wrote; there are parts of the Bible I can’t let my son read or hear about until he’s in the teens.

How do I explain SLAVERY? That it wasn’t expressly commanded against but was actually regulated including how to beat them and get away with their murder if they die after a few days. (Ex 21: 20-21)

How do I explain that verses in the Bible were used as an excuse to enslave his ancestors and convince them it was God’s will for them to obey their masters as unto the lord? (Eph 6:5)

How do I explain to a child that a man was killed by God for pulling out and not getting his dead brother’s wife pregnant? (Gen 38:9)

How do I explain that women and children were killed for the sins of their husband/ fathers? (Num 16: 27-33)

How do I explain that God hated Esau before he was born without going into the murky waters of predestination versus free will? (Rom 9: 11-13)

How do I explain that a man offered his virgin daughter to men that want to rape his male guests (and they actually rape her to death)? (Gen 19: 8) 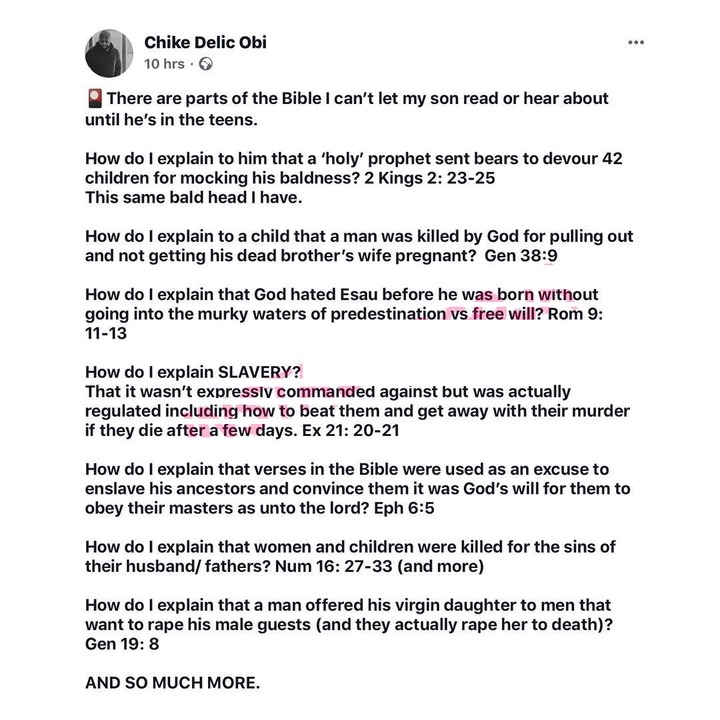 The man stated further that someone gave him a Children’s Picture Bible with story of the bald prophet and other disturbing contents, but have long removed it from his house so his son doesn’t see it.

This is a Dad that wants to nurture his son in the way of God but was still confused by the same Book of God. What do you have to say on this, add your views in the comment section below and don’t forget to share.