All Muslims Should Fast On The Day Of Arafah

Salam Alaikum Warahmontullah wabarakatuh to all my brother's and Sisters in Deen.

It's no more a news that Islam is the Religion of peace and blessings.

May the Rahma of Almighty Allah continue to be on prophet Muhammad SAW, his wives, children and all his companions, Abubakri, Alli Umar, Usman. And all the entire Muslims that follow the right deed of Almighty Allah. Ameen 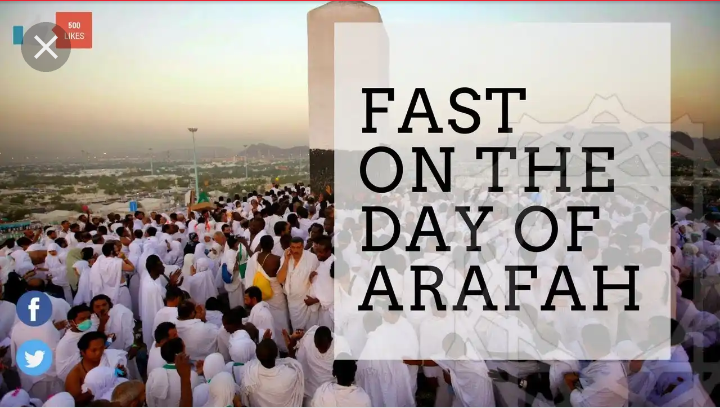 Fast on the Day of ’Arafah

If you are unable to fast for the whole ten days, try to fast on just the Day of ’Arafah, the 9th of Dhul Hijjah. Just as Laylatul Qadr is the most blessed night of the year, ‘Arafah is the most blessed day of the year. The Prophet (saw) said, ’There is no day on which Allah frees more people from the Fire than on the day of ‘Arafah’. (Muslim)

Arafah was the Day on which Allah perfected His religion, completed His favours upon His beloved Prophet Muhammad (pbuh), and approved Islam as a way of life! "Imam Ahmad recorded that Tariq bin Shihab said, "A Jewish man said to `Umar bin Al-Khattab, `O Leader of the Believers! There is a verse in your Book, which is read by all of you (Muslims), and had it been revealed to us, we would have taken that day (on which it was revealed) as a day of celebration.' `Umar bin Al-Khattab asked, `Which is that verse?' The Jew replied:

"This day I have perfected for you your religion and completed My favor upon you and have approved for you Islam as religion."

Umar replied, "By Allah! I know when and where this verse was revealed to Allah's Messenger. It was the evening on the Day of `Arafah on a Friday." May we all live to witness the day.

Content created and supplied by: Eminence20 (via Opera News )