10 surprising and interesting facts about Kaaba in Mecca.

By RealTideakin (self meida writer) | 18 days 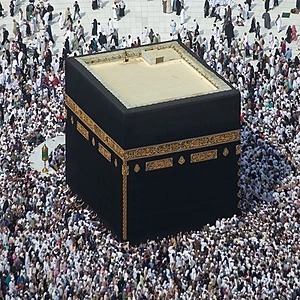 The Kaaba, also spelled Ka'bah or Kabah, sometimes referred to as al-Kaʿbah al-Musharrafah, is a building at the center of Islam's most important mosque, the Masjid al-Haram in Mecca, Saudi Arabia. It is the most sacred site in Islam.

10. Hajj is pilgrimage in Islam that must be performed by Muslims who are capable health wise and financially. It is the center part for Muslims lives to be completed once in lifetime. Mostly, Hajj rituals are to be performed obligatory as one of pillars of Islam and Kaaba is at the epicenter of Mecca. Both men and women dress in white clothing known as Ihram during Hajj. This signifies state of purity they entering.

9. Kaaba also called Grand Mosque. Quran says Kaaba is the first house of worship for Muslims and was built by instructions directly from Allah by prophet Abraham—known as Ibrahim in the Islamic tradition and his son, Ismail which was way back before the time of prophet Muhammad.

8. The Kaaba seeing today is not the same Kaaba constructed by prophet Ibrahim and his son. From time to time, Kaaba needed to be rebuilt severally from natural disasters, man-made disasters and also had a major reconstruction during the time of prophet Muhammad and matter of fact,that was done before he became a prophet. Since then,there has always been one particular one construction done on it at least once in a century. The last renovation took place in 1996 and this particular one was extremely intensive and thorough which led to replacements of many stones, restrengthened the foundation and adding entire new roof. So,Kaaba is a secured place.

7. Most times, we do see Kaaba to be black and gold ring cloth known as Kiswah around it but did you know Kaaba used to be multi coloured? The tradition of Kaaba being black started at the time of Abbasid Caliph Al-Nassir amd it was said his household colour was black. Before the black colour, Kaaba was covered in multiple colours, including green,red and even white.

6. According to Islamic tradition, there are two Kaabas. This Kaaba was mentioned in the Quran and by the Prophet. Al-Bait-al-Ma’mur which means frequented house or house situated on 7th heaven and it is directly above the Kaaba on earth. The Kaaba on earth is a replica of the one in 7th heaven,where Angels perform prayers there and about 70,000 angels visit there everyday

5. At the time of prophet Muhammad, each and every aspect to do with rights of Hajj was on the hands of different subgroups ,The Quraysh. After prophet Muhammad conquered Mecca, he was give key to Kaaba. Instead of keeping it as his possession, he returned it to Uthman Ibn Talha of Shayba family after snatched from him initially. Uthman Ibn Talha's descendants have been traditional key keeper for centuries. Prophet Muhammad saw him fit the role and descendants till end of time. Prophet Muhammad announced "Take it, O Children of Talha, eternally up to the Day of Resurrection, and it will not be taken from you unless by an unjust, oppressive tyrant"

4.One major problem people don't know about Kaaba is that it is situated at the bottom of a valley and when it rains,valley used to experience flood. This wasn't uncommon occurrence in Mecca before the advanced technology to curtain flood,flood control system etc which before all that,Kaaba had been half submerged in water but didn't stop Muslims from performing Tawaf (Circling the Kaaba seven times counterclockwise)and they started swimming around Kaaba.

3. Pictures seen have shown Kaaba having a cube shape but it was not meant to be in the beginning.The original dimensions of The House included the semi-circular area known as the Hijr Ismail.When the Kaaba was rebuilt just a few years before the Prophet received his first revelation, the Quraish agreed to only use income from pure sources to complete the rebuild. That meant no money from gambling, looting, prostitution, interest etc and there was not enough untainted money in this very wealthy trading city to rebuild the Kaaba to its original size and shape!

They settled for a smaller version of the Kaaba and put a mud brick wall (called “Hijr Ismail” although it has no connection to the Prophet Ismail himself) to indicate the original dimensions.

2. Inside Kaaba,there's a place inside where prophet Muhammad is said to have prayed. Inside Kaaba us mixed with authentic musk and perfume and they have to be applied throughout the year. The floors of Kaaba are made of white marble. Inner entrance located at the back of the Kaaba,there's a little niche where prophet Muhammad performed his prayers and this area is indicated with another colour of marble.

1. The silver stone to have silver casing surrounding it. This was most damaged in the middle ages by an extreme heretical Ismaili group from Bahrain called the Qarmatians who had declared that the Hajj was an act of superstition. They decided to make their point by killing tens of thousands of hujjaj and dumping their bodies in the well of Zamzam. As if this act of treachery was not enough, these devils took the Black Stone to the East of Arabia and then Kufa in Iraq where they held it ransom until they were forced to return it by the Abassid Caliph. When they returned it, it was in pieces and the only way to keep them together was by encasing them in a silver casing. Some historians narrate that there are still some missing pieces of the stone floating around.