By Abelkingdom92 (self media writer) | 1 year ago 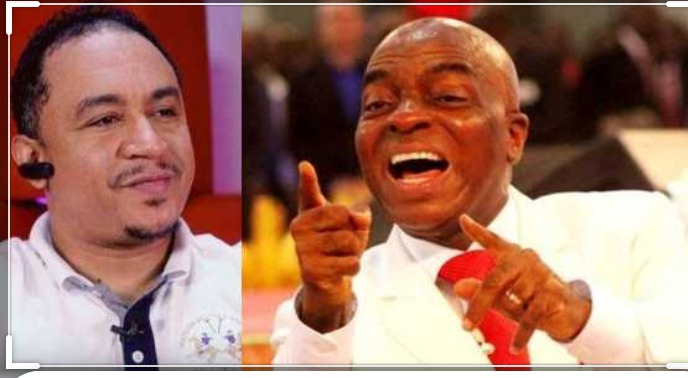 I am not a supporter of Daddy freeze for reasons best known to me . However, I have found reasons in the Bible to align myself with his Line of reasoning pertaining to Tithe .

Daddy freeze a known critique of Various Religious leaders in Nigeria took to his media platform to condemn Bishop oyedepo's tweet on Tithe shown on the attached image below. 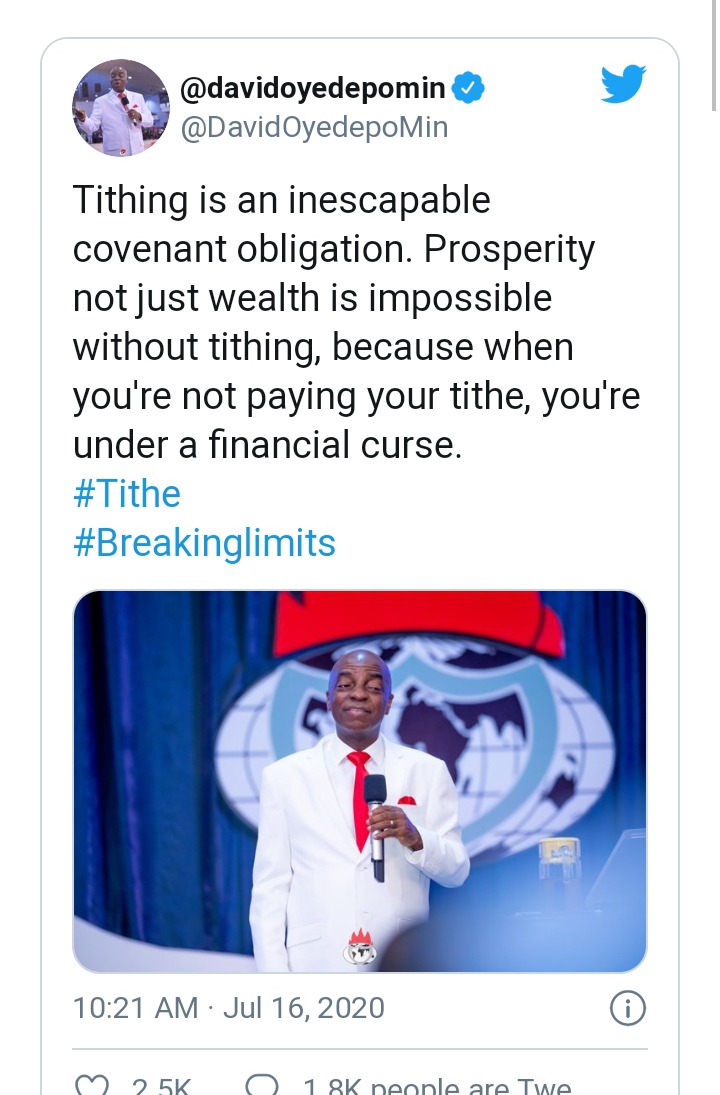 The aim of this article is to use the Bible and explain reasons why payment of tithes is not a must for all Christians. I will also appreciate your opinions with references from the Bible on this issue in other for us to learn.

Why I am not in support of Bishop David Oyedepo's admonition on Tithe, I am however of the opinion in this article that Christians should support God's work from there heart, a form of voluntary contribution not under compulsion, or a tenth of ones income or earning.

Lets get to the article proper.

The ancient practice of tithing or giving a tenth for religious purposes has continued to the present day. members of various denominations believe that they are scripturally obligated to contribute a tenth of their income to their church. Does God really require this? What does the Bible say?. The first recorded instances of tithing in the Holy Scriptures were voluntary, unsolicited acts. Abraham, the forefather of the Israelites, gave King-priest Melchizedek, one tenth of the spoils of his victory over Chedorloamer and his allies. (Gen. 14:18-20) Later, Abraham's grandson Jacob made a vow to God, saying: If God will continue with me and will certainly keep me on this way on which I am going and will certainly give me bread to eat and garments to wear and I shall certainly return in peace to the house of my father, then Jehovah will have proved to be my God. And this stone that I have set up as a pillar will become a house of God, and for everything that you will give me I shall without fail give the tenth of it to you."—Gen. 28:20-22. Clearly, Abraham had not imposed the payment of tenths on his family as a regular duty. It would have been superfluous for Jacob to vow to pay a tenth had he already been under obligation to do so. Moreover, Jacob's vow about giving a tenth of everything in no way implied that his descendants would have to do the same. That vow was a solemn promise by which Jacob alone bound himself.

Jacob's descendants, the Israelites, however, did eventually receive a law from God requiring the payment of tithes. What was the purpose of this law. Is it binding on Christians today.

The prime reason for tithes in Israel was to support the priesthood and the services at the sanctuary, because neither the priests not other members of the tribe of Levi were given a land inheritance of their own. Their main work was to look after the spiritual interests of fellow Israelites. The tithes, therefore, served as a divinely arranged means of support, a payment for services rendered on behalf of the nation. God's law stated: "The Levites themselves must carry on the service of the tent of meeting, and they are the ones who should answer for their error. It is a statute to time indefinite during your generations that in the midst of the sons of Israel they should not get possession of an inheritance. For the tenth part of the sons of Israel, which they will contribute to Jehovah as a contribution, I have given to the Levites as an inheritance." (Num.18:23, 24) The non priestly Levites, in turn, gave a tenth of what they had received to the Aaronic priesthood for its support.—Num. 18:25-29.

The Christian congregation forming the "Israel of God", or a nation of spiritual Israelites, differs from natural Israel. (Gal. 6:16) It has no special priestly class nor a body of sanctuary workers who cannot own land or are otherwise prevented from using their hands to the full in caring for their material needs. All the members of spiritual Israel are a "holy priesthood". (1 Peter 2:5) Thus, there is no need for the kind of material support Jehovah God outlined for natural Israel.

Furthermore, the activities carried on at the sanctuary by Israel's priests and the Levites pointed to realities fulfilled in Jesus Christ. Respecting the provisions of God's law to Israel, the Bible tells us: Those things are a shadow of the things to come, but the reality belongs to the Christ." (Col. 2:17) Since the Law has a shadow of good things to come, but not the very substance of the things, it can never, by the same sacrifices that are continually offered year after year make those who approach perfect." (Hen. 10:1) When the reality came into being, the functions pointing to it ceased to have any value. And tithes for supporting these functions were no longer required.

The Law covenant, with its commands about tithing, was abolished on the basis of Jesus' death on the torture stake. Of this, the inspired apostle Paul wrote, [God] blotted out the handwritten document and He has taken it out of the way by nailing it to the torture stake (Col. 2:14) Hence, the command on tithing given to the Israelites cannot be used to prove that God requires this of Christians.

An examination of the Christian Greek Scriptures gives no indication that members of the first-century church had to pay tithes. True, they made contributions for relief measures on behalf of needy fellow believers. They also gave assistance to elders who worked hard in speaking and teaching. At no time, though, do we read of a specific amount of income being set aside for such contributions. —Acts 11:29; Rom. 15:26; 1 Cor. 16:1-3; Phil. 4: 15,16. In the Christian Greek Scriptures, the emphasis is on voluntary giving that stems from the heart. We read, If the readiness is there first, it is especially acceptable according to what a person has, not according to what a person does not have." (2 Cor. 8:12) Also, Let each one do just as he had resolved in his heart, not grudgingly or under compulsion, for God loves a cheerful giver(2 Cor. 9:7) Manifestly, if tithing had been enjoined upon Christians, the amount would already have been determined for them by a specific command.

Regarding material assistance to eldersand Religious leaders, Christians were instructed: Let the older men who preside in a fine way be reckoned worthy of double honor, especially those who work hard in speaking and teaching. For the Scripture says, you must not muzzle a bull when it threshes on the grain', alsoThe workman is worthy of his wages. (1 Tim 5:17,18) Again, there is no mention of any tithe to be used in assisting elders materially. Then too, we should not conclude from this text that any of the elders received a fixed salary. What they received were voluntary gifts from those who appreciated that the time these elders spent in behalf of the congregation could have been used by them in working for money. The apostle Paul and other faithful elders, however, did not seek after such material assistance. They worked with their hands to care for their physical needs.—1 Thess. 2:9.

Thus, there is no Biblical proof that early Christians considered tithing to be a divine requirement. It was such only during the time the law covenant was in force. With the abolition of the Law covenant, the command about tithing was also canceled. And no command to tithe was given to the Christian congregation. Contributions for furthering the interests of true worship were strictly voluntary. Jehovah's Christian witnesses today follow the example of the first-century congregation in this regard.

Conclusively, I am in support of a Christian using his income to support God's word as he can, from his heart. Not forced into doing so, because; he is afraid of a financial curse from God for failing to keep the tithe law. Or failing to pay a certain percentage.

Please tell us your thoughts on tithe paying in the comment section.

Content created and supplied by: Abelkingdom92 (via Opera News )