By Timtrendz (self media writer) | 6 days ago

Popular Catholic Priest and writer, Father Kelvin Ugwu has countered Daddy Freeze's teaching on divorce. He made his stand on a post he made on his Facebook page.

Recall that Daddy Freeze had, in reaction to a post made by a pastor on social media, said that the Bible allows divorce if there is fornication or adultery. 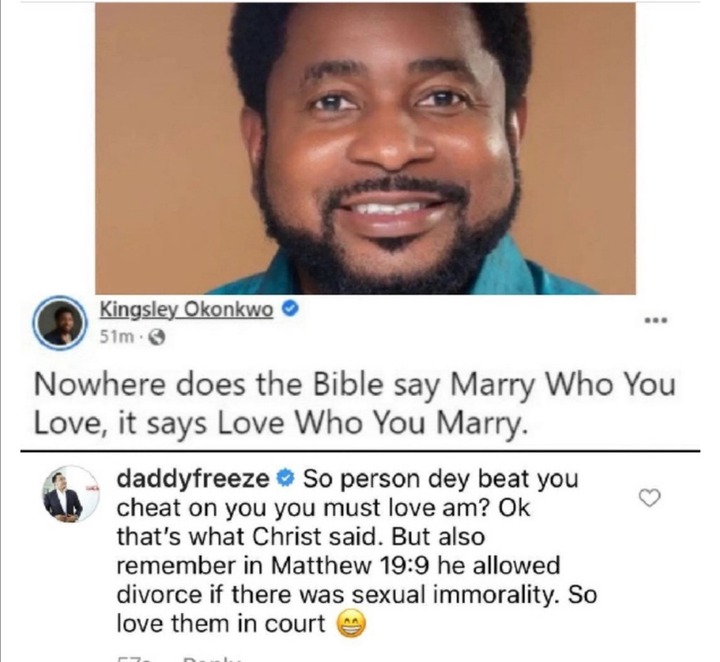 Father Ugwu in reaction urges Christians to patiently go through Mathew 19 before they allow Daddy Freeze to confuse them on what Jesus taught on Divorce.

According to the Reverend Father, Jesus' teaching on divorce was very revolutionary and a total cut-off from what use to be.

Quoting from Matthew 19:3, he said that Jesus' response to the question posed to him by the Pharisees on divorce indicates that one can't divorce one's wife for any reason because one has no power to divide what God has united.

He explained that there is no doubt about what Jesus means. He said the Pharisees understood that Jesus was not speaking for divorce but against it. Furthermore, he disclosed that that was why they further asked if they can't divorce for any reason, how come Moses permitted them to divorce?

Moreover, he said if Jesus actually permitted divorce for any reason whatsoever, the Pharisees wouldn't have challenged him with the example of what Moses taught them. He said Jesus' reaction makes it even more obvious that he doesn't support divorce.

Jesus told them Moses permitted them to divorce their wives because their hearts were hard. But that it was not originally that way from the beginning." Matthew 19:8.

He said Divorce was never the original plan of God. He disclosed that it is clearly written in Malachi 2:16 that he hates divorce.

Furthermore, he added that the points in the discussion between Jesus and the pharisees were so clear that Jesus does not permit them to divorce their wives for any reason.

However, he revealed the problem came in verse 19 where it appeared Christ gave an exception. He said if Jesus permitted divorce in the previous verses, it will appear that Jesus started contradicting himself. Likewise, he said that all through the conversation of Jesus with the Pharisees, he had maintained that divorce was not the original plan of God and that no man has the power to divide what God has united for whatever reason. Following verse 9 as quoted above, it then means the question of the Pharisees was answered. It then means, if you find your woman doing what is called “Sexual immorality”, you can divorce her.

He said there would be no difference between Jesus' teaching on divorce and that of Moses, if truly Jesus permitted divorce.

He also said that the question of Jesus contradicting himself had led many scholars to start investigating what was Jesus' original words before it was translated to English.

The translation of the original Greek word PORNEIA in verse 9 of Matthew 19 as “sexual immorality” is very misleading. He said in the original text, PORNEIA which was translated to mean fornication, adultery, and unlawful marriage.

He said 'porneia' can't be fornication or adultery because it will then mean the teaching of Moses to divorce on any reason whatsoever is correct and Jesus was simply contradicting himself, at the same time blabbing.

Furthermore, he explained that Jesus was not even talking about adultery or fornication as a ground for divorce, for if that was to be so, the teaching won't have been a big deal since that was what they already knew.

He sums up his position by saying many scholars and native speakers have stated that in the context in which Jesus used it, PORNEIA can only mean ILLICIT MARRIAGE and not sexual immorality.