Why Midnight Prayers Are Important In The Lives Of Every Christian

By Warrior73 (self media writer) | 4 months ago 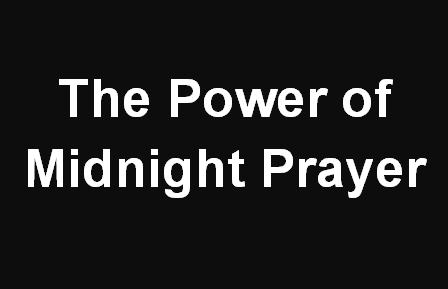 There's something about midnight in the Bible and as Christians, we must learn from those who have gone ahead of us and pray at night frequently.

Lots of supernatural events in the Bible happened between Midnight and the early hours of the morning. And for any Christian to truly be victorious they must discipline themselves to start praying at midnight whenever they can.

It was during an all night prayer that Jacob had the encounter that changed his life forever. When he heard that his brother, Esau, whom he'd defrauded was on his way to take vengeance, Jacob separated himself from his wife and children and prayed all through the night. And in the course of the prayer an angel appeared, who later changed Jacob's name to Israel; thus his destiny was sealed. He and Esau subsequently made amends and Jacob went on to become a great man.

One of the greatest acts of judgment God executed on the enemies of His people took place at midnight. In Exodus 12:29 the Bible said the angel of God passed through Egypt at midnight and killed all the firstborn of the Egyptians.

In Isaiah Chapter 37, the Assyrian army laid a siege against Judah. King Hezekiah cried out to God and between midnight and daybreak, God sent one of His angels to kill one hundred and eighty five thousand soldiers of the enemy.

Also it was around midnight that Judas led the enemies of Jesus to the Garden of Gethsemane, where He was arrested. They didn't want to carry out the act during the day, because the people would stone them so they came at night. No wonder Jesus said to them in Luke 22:53: This is your hour and the power of darkness. Christ Himself testified of the power of evil forces at night.

In Acts of The Apostles, 12:6, Apostle Peter was held in chains and locked up in prison to be killed the following day. But at night an angel came and set him free.

We can also see the case of Paul and Silas in Acts 16:25, who were chained and in prison. But at midnight, while they prayed and sang the power of God descended on the prison walls. Their chains fell off and the prison doors opened. This miraculous act led to the conversion of many.

Most times our flesh desires comfort but scripture tells us our enemies are not flesh and blood but wicked, Satanic forces in high places. And the most effective time when they carry out their evil work is at night.

So we should all endeavour to discipline ourselves and pray at night at least once or twice every month. And as we do God will see how we are willing to deprive ourselves of sleep in order to call unto Him for help. And He will rise up as the mighty man of war on our behalf in Jesus mighty name.

Remain blessed in the mighty name of Jesus.