The first social scientist to use the term sociology was a Frenchman by the name of Auguste Comte who lived from 1798-1857. As coined by Comte, the term sociology is a combination of two words. The first part of the term is a Latin, socius- that may variously mean society, association, togetherness, or companionship. The other word, logos, is of Greek origin. It means to speak about or word. However, the term is generally understood as study or science. Thus, the etymological, literal definition of sociology is that it is the word or speaking about society. A simple definition here is that it is the study of society and culture. Although the term “sociology” was first used by the French social philosopher august Comte, the discipline was more firmly established by such theorists as Emile Durkheim, Karl Marx, and Max Weber (Nobbs, Hine and Flemming, 1978).

Before going any further, let us note that the concepts “society and “culture” are central in sociology. While each concept shall be dealt with later in some detail, it appears to be appropriate here to help students differentiate between these two important concepts. Society generally refers to the social world with all its structures, institutions, organizations, etc around us, and specifically to a group of people who live within some type of bounded territory and who share a common way of life. This common way of life shared by a group of people is termed culture.

Now, turning to the definitional issues, it is important that in addition to this etymological definition of the term, we need to have other substantive definitions. Thus, sociology may be generally defined as a social science that studies such kinds of phenomena as: 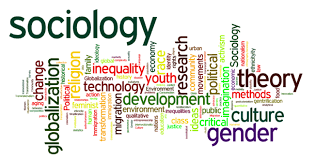 The structure and function of society as a system

The nature, complexity, and contents of human social behavior

Interaction of human beings with their external environment

The indispensability of social interactions for human development;

A more formal definition of sociology may be that it is a social science that studies the processes and patterns of human individual and group interaction, the forms of organization of social groups, the relationship among them, and group influences on individual behavior, and vice versa, and the interaction between one social group and the other (Team of Experts, 2000).

Sociology is the scientific study of society, which is interested in the study of social relationships between people in a group context. Sociology is interested in how we as human beings interact with each other (the pattern of social interaction); the laws and principles that govern social relationships and interactions; the /influence of the social world on individuals, and vice versa. It deals with a factually observable subject matter, depends upon empirical research, and involves attempts to formulate theories and generalizations that will make sense of facts (Giddens, 1982).

Regarding the detective and expository nature of the science, Soroka (1992:34) states that “Sociology is a debunking science; that is, it looks for levels of reality other than those presented in official interpretations of society and people’s common sense explanations of the social world. Sociologists are interested in understanding what is and do not make value judgments.”

6 Ways To Be Disciplined In Business.