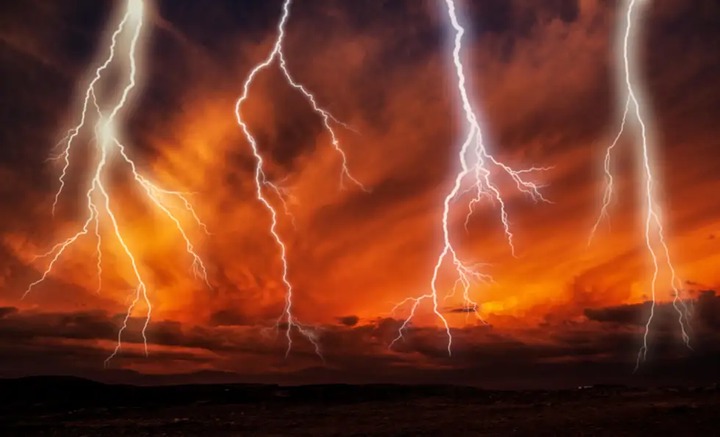 About 42,000 years ago, Earth's magnetic field broke down temporarily, according to a new study. This lead to environmental cataclysms and mass extinctions, including the demise of the Neanderthals. The dramatic period was a turning point in Earth's history, claim the scientists, full of resplendent auroras, electrical storms, and strong cosmic radiation. These changes were caused by the reversal of the planet's magnetic poles and variations in solar winds.

Amusingly, the researchers behind the international study (which involved scientists from Australia, New Zealand, Switzerland, the U.K., Germany, U.S., Argentina, China, and Russia) called this period the "Adams Transitional Geomagnetic Event' or simply "Adams Event." The Adams they are referring to is the science fiction writer Douglas Adams, who famously wrote in "The Hitchhiker's Guide to the Galaxy" that 42 was the answer to "the Ultimate Question of Life, the Universe, and Everything."

Chris Turney, a professor at UNSW Sydney and co-leader of the study, remarked that their study was the first "to precisely date the timing and environmental impacts of the last magnetic pole switch."

Interestingly, their discovery was aided by ancient New Zealand kauri trees, which have been sitting preserved in sediments for more than 40,000 years.

"Using the ancient trees we could measure, and date, the spike in atmospheric radiocarbon levels caused by the collapse of Earth's magnetic field," said Turney.

What the trees helped the scientists understand were the effects of the magnetic pole switch, which was already known as "The Laschamps Excursion." Using radiocarbon dating to analyze the kauri tree rings, they could gauge how the planet's atmosphere changed.

The study's co-lead Professor Alan Cooper, Honorary Researcher at the South Australian Museum, highlighted the significance of the ancient trees to their work.

"The kauri trees are like the Rosetta Stone, helping us tie together records of environmental change in caves, ice cores and peat bogs around the world," explained Cooper.

Using the trees, the researchers were able to create global climate models that showed how the growth of ice sheets and glaciers across North America, differences in wind belts and tropical systems, and even the extinction of Neanderthals could all be linked to the climate changes brought on by the Adams Event.

"Earth's magnetic field dropped to only 0-6 per cent strength during the Adams Event," pointed out Professor Turney. "We essentially had no magnetic field at all – our cosmic radiation shield was totally gone."

According to the researchers, another fascinating consequence of the Adams Event is that early humans would have been both inspired and terrified by the amazing auroras seen in the sky, brought on by the magnetic field fluctuations. "It must have seemed like the end of days," said Cooper.

He also supposes that the calamities would have forced our ancestors into the caves, leading to the amazing cave art that came about approximately 42,000 years ago.

Could such a magnetic pole reversal happen today? Professor Cooper thinks there are some indications like the weakening of the field by 9 percent over the past 170 years that tells us a reversal may be coming.

"If a similar event happened today, the consequences would be huge for modern society," shared Cooper. "Incoming cosmic radiation would destroy our electric power grids and satellite networks."

Chelsea Must Beat Brighton For This To Happen.

The Bundesliga Defender Chelsea Are Ready To Sign At All Cost In The Summer, Check It Out Here

Laugh With These Funny Photos And Memes

European Super League format for next season; Number of teams to be promoted and relegated.