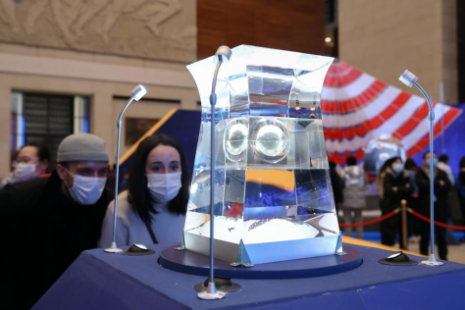 Two foreigners watch the lunar samples No.001 at the National Museum of China in Beijing, Feb. 28, 2021. (Photo by Chen Xiaogen/People’s Daily Online)

China handed out about 17.48 grams of lunar samples brought back to the Earth by the country’s Chang’e-5 lunar mission to 13 scientific research institutions at a ceremony held in the National Astronomical Observatories under the Chinese Academy of Sciences (CAS) in Beijing, capital of China, on July 12, marking the official commencement of scientific research on the first batch of lunar samples in the country.

A total of 31 applications for relevant research have been approved. According to the applications, the institutions that received the lunar samples, including the CAS, China University of Geosciences (Beijing), and Sun Yat-sen University, will research lunar surface formation process, volcanic activity age, and lunar evolution process.

The study of Chang’e-5 lunar samples is expected to offer new insights into issues including the evolution of the moon and planets and the habitability of planets, according to Zhu Rixiang, president of the expert committee set up to review and evaluate lunar sample study applications and also an academician of the CAS.

“Every grain of the samples is precious and should be protected with the greatest possible efforts so as to reduce loss during research to the greatest extent,” said Liu Jizhong, director of the Lunar Exploration and Space Program Center of the China National Space Administration (CNSA), at the ceremony marking the delivery of the samples.

The return capsule of Chang’e-5 mission returned to the Earth with about 1,731 grams of moon samples on Dec. 17, 2020. Since then, the expert committee for lunar samples and the ground application system have carried out a lot of work in relevant aspects.

Lunar samples are traditionally called lunar soil. After the Chang’e-5 lunar samples were officially handed over to the ground application system, the latter carried out tasks including unsealing, processing, storage, preparation, fundamental analysis, description, and establishment of archives, according to Pei Zhaoyu, deputy director of the Lunar Exploration and Space Program Center of the CNSA and director of Lunar Sample Management Office.

Meanwhile, the CNSA issued lunar sample management regulations to standardize the preservation, management, and utilization of lunar samples for the purpose of giving full play to their scientific value and role in improving social benefits, Pei said, adding that nine experts were hired to make up the first expert committee for lunar samples according to the regulations. 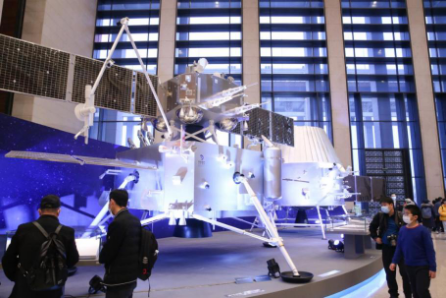 Visitors watch full-size models of the ascender and lander of China’s Chang’e-5 moon probe at the National Museum of China in Beijing, Feb. 28, 2021. (Photo by Chen Xiaogen/People’s Daily Online)

The powder samples can be jointly borrowed by multiple applicants, while the rock samples and flake samples can only be used exclusively, Pei said.

Xiao Zhiyong, associate professor at the space and planetary science department of the School of

Atmospheric Sciences, Sun Yat-sen University, and leader of the planetary and geological science research group of the department, was excited about receiving valuable lunar samples in Beijing for scientific research.

The research group will focus on the process and history of the lunar impact in its analysis and research on the lunar samples it received and carry out meticulous geochemical research on the samples based on previous studies, said Xiao. 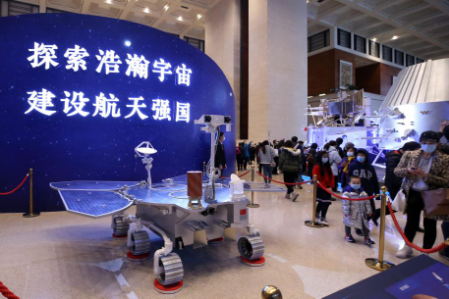 Visitors watch a full-size model of the Tianwen-1 Mars rover at the National Museum of China in Beijing, Feb. 28, 2021. (Photo by Chen Xiaogen/People’s Daily Online)

The CNSA is working with relevant departments to formulate rules for international cooperation on lunar samples, which will be implemented after approval from the central government, according to him.