Answers you might want to get from Shenzhou-12 astronauts 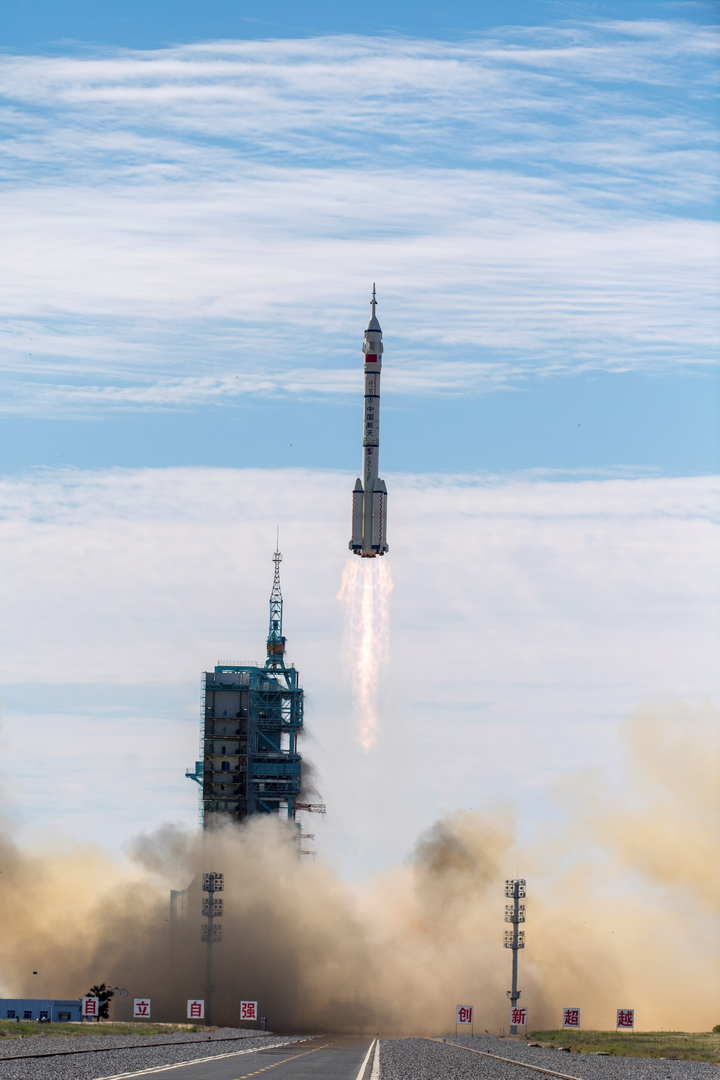 China's Shenzhou-12 spaceship was launched on June 17 from the Jiuquan Satellite Launch Center in northwest China’s Gobi Desert on June 17 and successfully reached low-earth orbit. Three Chinese astronauts entered the Tianhe core module of the country's space station after the spaceship docked with the core module, becoming the first batch of astronauts to do so.

It marked the first manned mission during the construction of China's space station, as well as the first time for Chinese astronauts to enter the space in the recent five years.

Before the spaceship was launched, three astronauts onboard it, including Nie Haisheng, Liu Boming and Tang Hongbo, received an exclusive interview by People's Daily and answered questions from readers.

What tasks do you have during the mission? Is there anything different from previous manned missions?

Nie: First of all, the workload is huge. For example, we must make the core module livable immediately after we enter it, and then go out of the module for installation and maintenance. Different from those in the Shenzhou-7 mission, the extravehicular activities this time will last longer and involve more tasks. We have to stay around six hours outside the core module during each extravehicular activity. Besides, we'll also work with extravehicular robotic arms for the first time, which is unimaginably complicated and difficult.

Apart from that, this time we'll remain in-orbit for three months, which has raised higher requirement on our living and health conditions. We must enhance our health maintenance, better train our living abilities, and explore how to better adapt to the life and work in space.

In addition, compared with space labs, the space station is a larger scientific platform on which we have to complete more space and technology experiments in a shorter time. People yearn for living in space. Is it true that you can make phone calls at any time during the mission this time?

Nie: We are able to make phone calls from space to the earth. When we are relatively free, we'll communicate with the ground, saying hello to our families. The tablets we bring are connected to the internet, and they are connected to WiFi network even if we go outside of the core module. Of course, it is local area network of the space station.

How will you have your hair cut during the three-month stay in space?

Nie: We had practiced on the ground, helping each other cut the hair. The hair cut off would float in the zero-gravity environment in space, so we installed a vacuum cleaner on the hair clippers to take in the hair cut off.

Can you bring private stuff with you to the space?

Tang: My child is a middle school student, who's very humorous and optimistic. I'm proud of him. I have many videos of him and my wife, and I would watch these videos during off-work hours to relax.

How extraordinary was your training as you have been tasked with such heavy missions?

Liu: The most tiring part was the weightlessness environment training in the buoyancy tank, in which we were trained wearing underwater training suits. The extravehicular activities of the Shenzhou-12 mission are longer than before, so the underwater training lasted six hours each time. We must have strong faith and willpower to get through the training.

It is reported that astronauts could barely hold chopsticks after the weightlessness environment training. Is there anything that helps you adapt to it?

Nie: First of all we would enhance our physical training, and then build up the strength of our upper bodies. In addition, as we attend more underwater training, our cardio-pulmonary function and upper body strength would be reinforced. We'll get used to it as long as we keep on training.

Tang: The weightlessness environment training is a required training course for the Shenzhou-12 mission. The physical challenge was Ok for me, but I felt uneasy when wearing the extravehicular mobility unit. I felt restless, and wanted to get out once I got in. I could hardly sleep or eat for a while. Later, I found it felt better if I turn down the temperature of the extravehicular mobility unit, and I would put myself at ease by adjusting my mentality. Now, I feel great in the unit, and there's nothing uncomfortable even if I'm wearing it for hours. What are the purposes of simulating the life in space?

Tang: It aims at testing the concentration of astronauts under persistent work intensity, and some training programs are to test our capability to handle emergencies in space under extreme conditions. For example, we have to stay awake for 72 hours in the narrow and closed cabin, and ensure high work performance under persistent intensity. We once completed a one-month closed training on the ground, in which we simulated the whole process after we enter the space station, including our life, work and disposal of waste materials.

Nie: Each of them was different. As China advances its manned space technologies step by step, we will have more and more missions that last longer in space, which also raises higher requirement on the comprehensive competence of astronauts.

In recent years, our living conditions, work environment, communication and safety in space have all been significantly improved. For instance, our living space has been larger and larger. There was no astronaut entering the orbital cabin in the Shenzhou-5 mission, while during the Shenzhou-10 mission, there were two "bedrooms" - two of the three astronauts could sleep in the "bedrooms" and the rest on the floor. In the space station, we now have three "bedrooms" and two "living rooms."

When Fei Junlong and I were on the Shenzhou-6 mission, the temperature in the orbital cabin was low, and we rarely heated our food. In previous missions, our dishes could stay non-repetitive for three days, and now the number has been extended to seven, which allows us to enjoy more varied tastes in space.

Previously, the water and oxygen in space were brought by us from the Earth. Now with the space station, we will stay in space for three to six months, and the water is recycled throughregenerative environmental control and life support technology. Condensate water and sweats can be reclaimed and purified.

We've been expecting the arrival of the era of space station and worked years for it. The space station, after being completed, will be a home of Chinese astronauts in space, embracing batches of astronauts. In the future, there might be astronauts from other countries joining the Chinese space station on which they will conduct more scientific studies and use the results to benefit the whole of mankind.