Most homebuyers are pretty adamant about checking out a property before buying, and David Mazurek was no different. Sure, the Edmore, Michigan farm he was looking to purchase back in 1988 wasn't exactly brand new, but Mazurek still wanted to know exactly what he was getting himself into.

As the property's owner led him on a tour of the farm, Mazurek noticed a large stone propping open the door of the back shed. Mazurek thought nothing of it at first, yet as the tour continued he just couldn't shake the odd-looking rock from his mind. 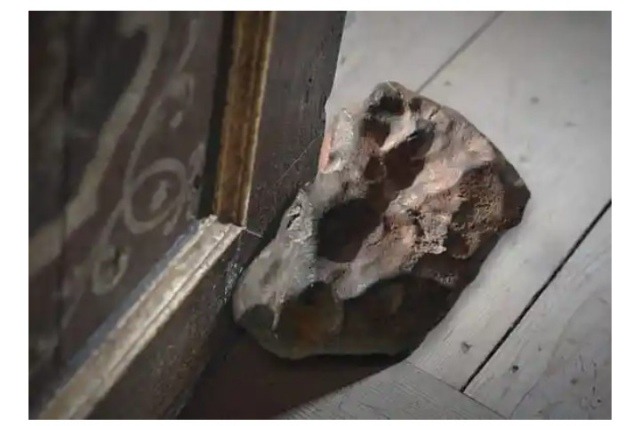 Finally, Mazurek just had to ask: what in the world was that thing? It was unlike any rock or stone he'd ever seen before. That's when the farmer revealed that it wasn't of this world at all.

According to the farmer, he had actually seen the rock fall from the night sky as a child way back in the 1930s. Eager to recover the space stone, he and his father had trekked out to the fields the next morning to see if they could locate it.

Jutting from a large crater in the earth, the stone was still hot to the touch as the farmer and his father pulled it from the dirt. Neither of them had ever seen anything like it before, though, given its weight, they figured it'd be best used as a doorstop.

The farmer's story was believable enough, but even so, Mazurek wasn't entirely convinced. A meteorite as a doorstop? What a waste! Still, he was more than happy to take the stone when the farmer offered it to him along with the property.

For the next three decades, Mazurek made use of the rock in the only way he knew how: as a doorstop. Yet the unusual stone continued to marvel all those who saw it, and over the years, his children even brought it to school for show-and-tell.

Finally, following a meteor shower in early 2018, Mazurek began to wonder if the farmer's story might have been true after all. People all over Michigan were finding meteorites in their own backyards, though they certainly weren't using them as doorstops.

Not only were Michiganians turning these space rocks in for cash, but they were also making some pretty big bucks doing it, too. Mazurek could only imagine what his "doorstop" might be worth, but there was still one glaring question he needed to answer first: was this a true meteorite, or just an ugly rock?

He contacted a friend who studied geology at Central Michigan University, who then led him to Dr. Mona Sirbescu, a professor at CMU. Dr. Sirbescu agreed to examine the stone, though she wasn't particularly optimistic about the outcome.

Over three years, Dr. Sirbescu had been approached hundreds of times about suspected meteorites, and nine times out of ten, these "extraterrestrial objects" turned out to be just ordinary rocks.

Yet as soon as she laid eyes on Mazurek's stone, Dr. Sirbescu knew they were dealing with something special. Holding it in her hands, the large rock had all of the tell-tale signs of being a meteorite, though it'd take more than just a physical examination to confirm her suspicions.

Using x-ray fluorescence, Dr. Sirbescu dove into the makeup of the stone. While Mazurek's "doorstop" was 88 percent iron, it also contained 12 percent nickel. Being that this metal is almost solely found meteorites, Dr. Sirbescu knew this stone came from outer space.

Weighing over 22 pounds, Mazurek's meteorite was now the sixth-largest space stone of its kind to be recovered in Michigan. With a pedigree like this, Dr. Sirbescu was confident that the rock could fetch a ton at auction.

More specifically, she suggested it could get up to $100,000! But they were getting ahead of themselves here, and Dr. Sirbescu didn't want to make promises she couldn't keep. To be extra sure that this was truly a $100k meteorite, she sliced a piece of the rock and mailed it off to the Smithsonian for additional analysis.

Geologist Catherine Corrigan was the first to examine the stone, and after a few tests, she could corroborate Dr. Sirbescu's findings. But even with the meteorite's identity finally set in stone, what was to become of Mazurek's incredible find?

According to Dr. Sirbescu, he had two options: sell the stone to a museum, or sell it to a private collector looking to turn a profit. Either way, Mazurek was determined to put the proceeds from the meteorite to good use.

If he did decide to sell the stone, Mazurek vowed to donate ten percent of the sale to CMU to provide funding for further geological studies. Regardless of the donation, however, Dr. Sirbescu insisted that being able to study the meteorite was gift enough.

Allowing her students to physically interact with the space rock gave them a unique perspective on the true nature of their studies. "Just think, what I was holding is a piece of the early solar system that literally fell into our hands," Dr. Sirbescu recalled.

Mazurek's meteorite – now dubbed the Edmore Meteorite in 2021 – continues to be analyzed in the hope of discovering rarer elements within. Although meteorites are not an entirely uncommon sight here on Earth, one unusual stone once found on the Moon had no earthly business being there at all.

History, effect and the impact of Covid-19 pandemic on the Nigerian Economy.

Fear of Bandits: Shehu Sani Narrates How a Friend of His Discharged Himself From a Clinic

"Stop Blaming Me, Ada Jesus Was Taken To One Of The Best Hospitals" - Harrison Writes Emotional Post

Ada Jesus Wanted To Appreciate All Those Who Supported Her, But Sadly Didn't Do It- Harrison Reveals

Check Out Why A Popular Doctor Begged People To Drink Water

The Kidney Disease Ada Jesus Died Of, Here Are Important Things You Should Know And How To Avoid It