Photo taken on Feb. 28, 2021, shows visitors watching life-size models of the ascender and lander of China’s Chang’e-5 lunar mission at the National Museum of China in Beijing. (Photo by Chen Xiaogen/People’s Daily Online)

When did lunar volcanism stop? How did the moon sustain magmatic activity? How much water exists in the interior of the planet? The latest findings released by the Chinese Academy of Sciences (CAS) on Oct. 19 gave answers to such questions.

The CAS, which has been researching a portion of the lunar samples brought back by China’s Chang’e-5 probe, dated the youngest basalt on the moon at around 2 billion years in age, extending the lunar volcanism duration by 800 million years from previous findings.

Source regions of late magmatic activities on the moon don’t have concentrations of radioactive elements, and water barely exists in the source regions of the lunar mantle, according to CAS researchers.

Relevant research results have been published in Chinese academic journal National Science Review and British weekly scientific journal Nature in the past week.

Lunar basalts were formed when lava produced by partial melting of the lunar mantle was brought to the surface of the planet by volcanic eruptions and then crystallized after cooling. Volcanism is an emblem of the endogenic forces of the moon, and its end means that the planet lacks endogenic forces and dies geologically. Therefore, research into volcanic rocks can help reveal the moon’s chemical composition and thermal evolution.

Previous lunar samples and research into lunar meteorites indicated that magmatism on the moon, a symbol of the planet’s activity, dates back to at least 2.8 billion and 3 billion years ago, and dark basalts produced by ancient magmatic activities have formed lunar maria.

However, there have always been controversies among scientists over issues including how late igneous activities on the moon were formed and when exactly these activities stopped.

In their latest research, CAS scientists analyzed over 50 minerals rich in uranium (including baddeleyite, perovskite zircon and tranquillityite) of the debris of lunar basalts with a super-high spatial resolution uranium-lead dating technique and concluded that the basalts were formed about 2 billion years ago.

It means that magmatism still existed on the moon about 2 billion years ago, 800 million years later than the time determined through study of previous lunar samples.

The accurate chronological data on the basalts of the Chang’e-5 moon samples provides a key foundation for dating curves of statistics for impact craters, and will significantly increase the accuracy of dating statistics for impact craters on the surface of inner solar system planets, according to Li Xianhua, a CAS academician and a research fellow at the Institute of Geology and Geophysics under the CAS.

“We found that the lunar soil retrieved by Chang’e-5 has basically the same features as that brought back by the U.S. Apollo missions. But it seems smaller in terms of particle size, which is 49.8 micrometers on average. The average particle size of flour is 75 micrometers, which means lunar soil is finer than flour,” said Li. 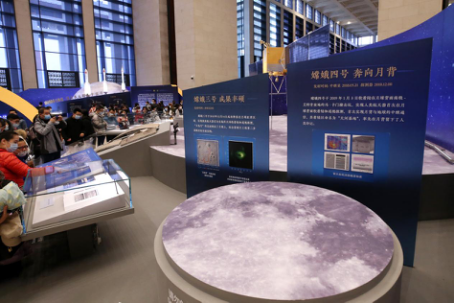 CAS researchers also discovered that the lunar basalts studied are rich in iron content but very low in magnesium content, and that they belong to a new type and came from the same magmatic eruption.

Accurate chronological research results showed that lunar basalts collected by the Chang’e-5 probe were formed around 2 billion years ago, nearly 1 billion years later than the previously known ending time of lunar magmatism, raising new questions and providing new research directions concerning causes of young igneous activities on the moon, pointed out Audrey Bouvier, a professor at the University of Bayreuth in Germany and a world-renowned planetary scientist.

The lunar sample research results published by Chinese scientists have provided evidence that magmatism existed on the moon between 3 and 1 billion years ago, once a gap in the records of volcanic eruptions on the planet, said Yin Qingzhu, a professor at the University of California, Davis, and a well-known researcher in isotope geochemistry and cosmochemistry.

Yin believes the new discovery is of great significance for the calibration of the absolute ages of meteorite craters on the surface of planets in the solar system and further study of the thermal history of the moon.

The CAS is actively pushing ahead international cooperation in lunar sample studies, and has already reached a preliminary consensus with the French National Centre for Scientific Research about joint research into moon samples, said Zhou Qi, vice president of the CAS.