Heracleion, an ancient Egyptian settlement, was once a myth, only known to modern man through myth and ancient historians. No one expected to find the ruins when they were found in 2000 by French underwater archaeologist Franck Goddio.

Against all odds, they discovered the decaying yet majestic underwater settlement, as well as a glimpse into its glorious past. 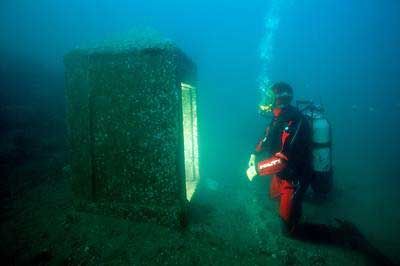 Heracleion, also known as Thonis, was once thought to be a myth, a city caught between legend and truth.

It was said that Helen and Paris of Troy were stranded there before the Trojan War began, according to legend. Hercules himself was said to have visited the area, thus giving it its name.

The legendary city was also mentioned by ancient historians Herodotus, Diodorus, and Strabo. 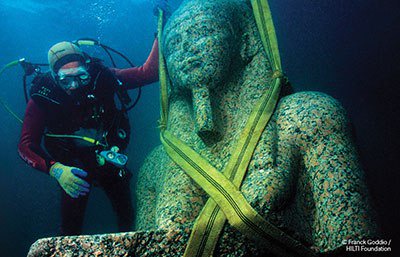 Despite its importance in Greek culture, no trace of the city had been discovered until it was discovered in 2000. Scholars weren’t even aware that Heracleion and Thonis were the same city before then.

Scholars have gained insight into Heracleion as a result of the latest discovery.

The once-thriving city, which dates back to the 12th century BC, experienced a time of exceptional prosperity. It was the mandatory port of entry into Egypt for all ships arriving from Greece. It was also religiously significant, owing to its Amun temple. It disappeared over 1,200 years ago, probably as a result of significant earthquakes and floods, only to be buried for over a millennium under the sand and mud.

Heracleion is located near Alexandria, Egypt, in Abu Qir Bay, and has an overall research area of 11 by 15 kilometers. Several artifacts were discovered during the 13-year dig.